Giancarlo Stanton may be the next notorious slow starter

Giancarlo Stanton has put on a poor offensive display in 2013, but this is not necessarily a red flag. Slow starting players have quite the presence in the major leagues and Stanton might simply be establishing his presence among their ranks.

Share All sharing options for: Giancarlo Stanton may be the next notorious slow starter

Sometimes people just have trouble starting things. Garfield the cat, always hated Mondays because it was the start of the week. Mark Teixeria, Adam LaRoche, Ryan Howard are among the players that, like Garfield, cannot seem to start out strong. As a career .200/.333/.255 hitter in March and April, it seems as though the Miami Marlins might have a soon-to-be notorious slow starter on their hands in Giancarlo Stanton.

Compared to other recent and established slow starters, Stanton reminds of Mark Teixeria. Teixeria proves that this sort of out-of-the-gate struggling is not unprecedented. In fact, Teixeria has managed to have a very productive career despite the slow starts. Giancarlo Stanton as a 23-year-old does project to have a better career than "Tex," but he still provides a good reference point for slow starters. 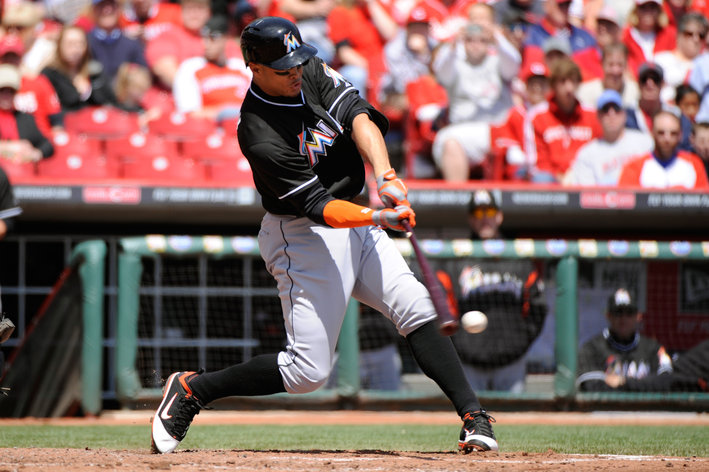 The early-season struggles of Marlins' slugger Giancarlo Stanton gives more evidence as to why the club's offense has been so anemic in 2013.

Stanton's career is still just beginning, so it might be a bit too early to declare him a slow starter, or really too early to declare anything about his career. It is entirely possible that Stanton is being pitched differently this year, and he has not yet made the proper adjustments.

Looking deeper into Giancarlo Stanton's production you can see a significant drop off in line drives.

This could be the source of Stanton's poor April. He is hitting the ball on the ground more and high in the air more at the expense of line drives. Line drives are a critical to any batter's game. Stanton actually boasts a .795/.786/1.283 slash on line drives as compared to a .292/.292/.331 line for ground balls. He needs to hit his liners or his production will suffer, exactly what has happened so far in 2013.

The fact that Giancarlo Stanton does not boast a batted ball line similar to his career tells us that there is something different about him. What that is remains to be seen. Stanton could have lost some bat speed, he could be swinging at bad pitches or he could be not swinging at good pitches. his swing rate on pitches in the zone is only 55.2 percent compared to his career 65.7 percent. He might not be seeing the ball come to him and thus not swinging at the pitches he would typically turn into those liners he is missing.