Share All sharing options for: The 2013 Miami Marlins All-Star ballot is terrible

Major League Baseball released its annual All-Star ballot online today, looking to get fans to start the voting process way too early in the regular season. Come on, MLB, it's April. How am I supposed to know who is an All-Star in April?

In any case, the ballot was released, and the names on there reflect players who were starters on their respective teams' Opening Day game. This decision makes the Miami Marlins' contributions to the ballot look terrible. 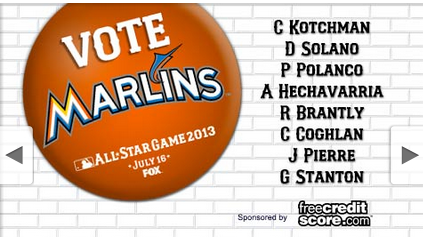 This banner from the front page of the official Marlins site just screams "mediocre!" The Marlins fielded an awful Opening Day roster thanks to the roster teardown from this past offseason, injuries to key starters, and Mike Redmond's misguided notion of platooning Chris Coghlan with Justin Ruggiano. As a result, somehow Coghlan, Casey Kotchman, and Juan Pierre are present on a 2013 All-Star ballot.

It is obviously too early to make any assumptions about the regular season and who is deserving of an All-Star bid, but take a look at the early-season numbers on the players above.

In case you were wondering, only one of those eight players listed is currently above replacement level, and that is catcher Rob Brantly and his significantly higher positional adjustment. He has an excuse for hitting poorly, because he is a catcher and he is allowed to. Giancarlo Stanton? Not as much.

The best Marlins hitter on the roster right now who has been a regular starter for most of the year is Justin Ruggiano, and he is not even on the ballot because of the Opening Day rule. However, if you would like to vote for Ruggiano, you can still write him in.

It would be nice if there were some pitcher who was All-Star worthy, but none of the starters at the moment look like they will do well enough to be worth pitching in that game. Sure, Kevin Slowey, Ricky Nolasco, and Jose Fernandez look like they have varying levels of competence, but Slowey is due for some major regression in the home run and strand rate department, Nolasco is classically unpredictable, and Fernandez has struggled just enough in his last two starts to cast some doubts about his major league readiness.

If the Fish continue to play this poorly, they may be in line to provide one of the least deserving All-Stars in All-Star game history. The team's most likely choice is a rebounding Stanton, but if he continues with his struggles (which is unlikely), the nod may go to one of the team's dubious pitching choices.

Still, if you want to vote, click here to access the ballot. You can vote up to 25 times, and up to 35 times if you vote with an mlb.com account for the first time. Feel free to vote for a Marlins player, if only to troll the rest of the teams in the league.