With all of the hype and attention that Double-A Jacksonville has received, High-A Jupiter has managed to fly under the radar. Despite an ugly record, the Jupiter team is full of prospects and interesting players. Jupiter has struggled to win games in 2013, but three of their starting pitchers have been nothing short of fantastic. Justin Nicolino, Jose Urena, and Josh Hodges, are very different styled pitchers, but all three have been very effective so far.

Justin Nicolino, 21 years old, came over to the Marlins this offseason in the big Toronto trade. Fish Stripes ranked him as the sixth best prospect in the Miami system this offseason. Nicolino has by far the best control of any prospect in the Marlins minors, and he can throw his mediocre fastball, tremendous changeup, and impressive curveball for strikes at will. So far, in four five-inning starts, Nicolino has only allowed six earned runs. His strikeout rate of 3.15 K/9 is not pretty, but that probably is just an early-season anomaly. In his last two starts, Nicolino has not allowed a single run, which is made even more impressive by the fact that both teams came against Bradenton. Bradenton's roster features two top hitting prospects in all of baseball in Alen Hanson and Gregory Polanco. Justin Nicolino has pitched to contact to an extreme in his first couple starts, and so far it's working.

Marlins prospects: A look at Yelich, Ozuna, and Marisnick 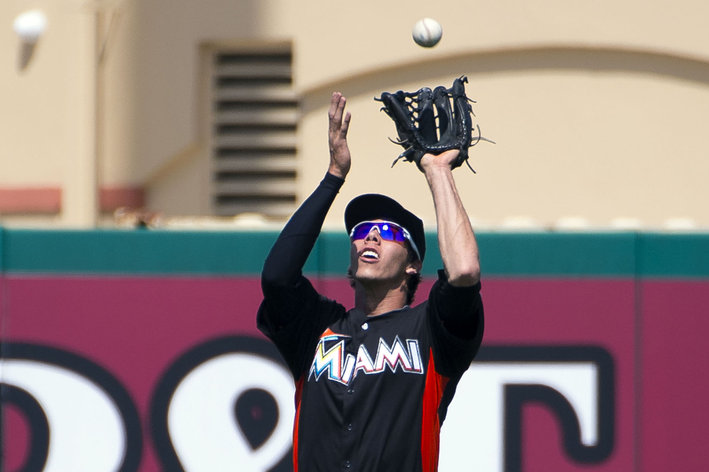 Jose Urena, 20 years old, is my favorite prospect in the Miami farm system for a variety of reasons. Not only has Urena posted fantastic numbers at every level he has played at, but he does this by throwing a mid-90's fastball and a nasty slider. Urena could turn into a workhorse second or (more likely) third starting pitcher if he can develop his changeup a little more. Urena has pitched in four games, starting three of them, and he's sporting a 3.25 FIP right now. Urena has struck out 8.2 batters per nine innings and only walked 1.5 per nine. If he can continue to put up numbers like that, the Marlins would have no chance but to send him up to Double-A.

Josh Hodges, 21, was a seventh round pick in the 2009 draft. Standing at 6'7'', Hodges has an imposing presence on the mound. With a lackluster arsenal of offspeed pitches and a fastball that sits at about 90 mph, Hodges has his work cut out for him. Nonetheless, he has exceeded all expectations set for him in the past. In four starts, Hodges has a rate of 7.2 strikeouts per nine innings, 1.5 walks per nine, and a 3.09 FIP. He has at times struggled to reach five innings, but he has yet to face a lineup that he hasn't been able to conquer. Hodges started 26 games last year for Greensboro, so he has shown that he can stay healthy for an entire season. Now, Hodges will have to keep proving that he can dominate hitters without having a great repertoire.

Overall, these three are all destroying the competition in Jupiter. Look for Nicolino, Urena, and Hodges to continue to put up great numbers for the remainder of the season.