The Miami Marlins are struggling on the field, but if the latest hijinks with Rob Brantly and Miguel Olivo are any indication, the team is not suffering off the field because of the losses.

A few games ago, Miami Marlins catcher Rob Brantly was sent in to pinch-run for backup catcher Miguel Olivo, who got the starting nod that night. Olivo took offense and challenged Brantly to a foot race, with Brantly getting a shot at $1,000 if he came out victorious. It turns out Miguel Olivo was the faster man, which just cannot be right, can it?

The merits of who among Brantly and Olivo is faster is not particularly relevant, though it does make me question scouting reports that say Brantly has above-average foot speed for a catcher. The fact that Brantly had to go bring the bags for all the veterans is also not important, although it always provides fun picture opportunities such as the one taken by Clark Spencer of the Miami Herald here: 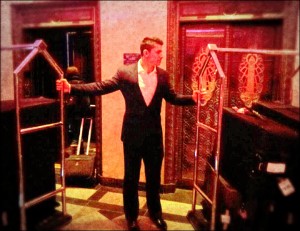 via blogs.palmbeachpost.com, photo taken by Clark Spencer of the Miami Herald

Or this one of a well-dressed Brantly getting career minor leaguer Nick Green's bags.

Fun pictures aside, none of those things are relevant. Well, except that in the aggregate, they do mean something to the Marlins, and it is a positive to see. As scientific as we try to be here at Fish Stripes, being a human being is partly unscientific in terms of emotions and feelings. In baseball, we refer to this hidden aspect typically as "chemistry" in the "clubhouse." While such a variable obviously cannot be measured, it is hard to ignore the effect on the mind on the players and coaches involved. Everyone has had a bad day at work, and you know when you have one of those days, you are not able to perform at your peak level.

Baseball players are no different, which is why it is encouraging to see the Marlins perform hijinks like these off the field. Playing jokes on each other off the field is a good sign that the players are getting along well and that there is little dissension in the clubhouse. This is particularly important for the Marlins because of the nature of the 2013 season. The Fish are not going to win a lot of games, and for a lot of teams and players, that would be frustrating to go through, especially when that fate is sealed at the beginning of the season. It is easy to go out there and sulk when there is little at stake for the team, and sulking can lead to a clubhouse atmosphere that is not conducive to good vibes.

The Marlins are displaying the opposite of that, at least in the early going. Stories like these are, of course, fluff pieces to fill in the time of a long and dragging season. But Marlins fans can take something from this, and that is that despite the difficulties of this season, Marlins players are not acting discontent, stirring up trouble in the clubhouse, and failing to get along with each other. When you see something like this, it makes you feel as though the team is getting along, and that is a #minorvictory for a bad 2013 season. It's a far cry from blaming your manager for your failures as a closer!

Oh, and also, this picture. Giancarlo Stanton looking spiffy in a suit with his teammates is a good sign of contentment, at least for now.