The early-season struggles of Marlins' slugger Giancarlo Stanton gives more evidence as to why the club's offense has been so anemic in 2013.

Share All sharing options for: Giancarlo Stanton's struggles and the Miami Marlins offense

With the Miami Marlins currently possessing the worst record in all of baseball to start the season at 4-15, it's safe to say that things haven't gone the Fish's way. Much of that has to do with their extraordinarily anemic offense, one that's on pace to be part of elite company of other teams that were completely terrible.

Many of us knew coming into this season that the one saving grace of the Marlins offense would be slugger Giancarlo Stanton, who up to this point in the season has been just as bad as some of his current offensive teammates. Stanton is no stranger to slow starts, as it took him a while to get going last season after going through nagging injuries during spring training

This season appears to be a bit of the same thing, only in reverse. In 2013, Giancarlo Stanton was off to a slow start in the first two weeks and recently has been bothered by shoulder issues. For a guy with as much power as Stanton, a shoulder injury is one can bother a player over the course of an entire season and even though nobody, especially not Stanton, will admit that poor performance would be linked to injury, you'd be naive not to realize that it has at least something to do with it. 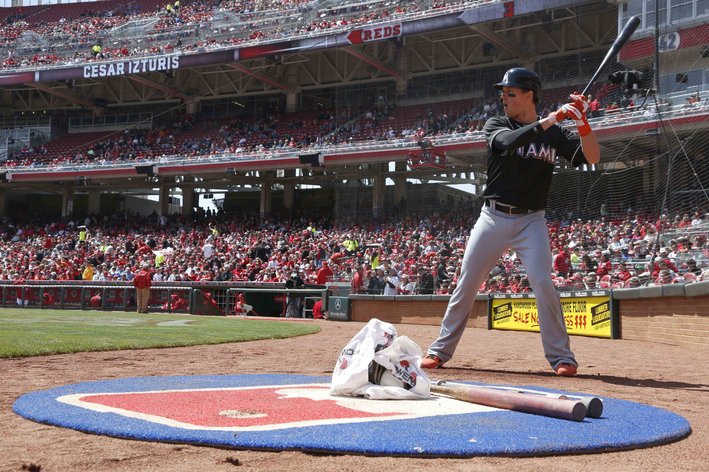 The Miami Marlins have had a struggle scoring runs all season. What is not so certain is if the Marlins are historically bad or even if their struggles are a real reflection of the Marlins talent.

Because Giancarlo has yet to hit the disabled list (and let's hope he won't have to this season), we can start to look at some of the numbers behind his slow start.

According to FanGraphs, one of the biggest reasons why Stanton isn't crushing the ball all over the yard is that he hasn't been seeing any pitches to hit in the first place. Stanton is seeing just 33.9 percent of pitches in the strike zone so far which, if qualified, would rank him as having the lowest zone percentage in all of baseball. As a result of this, he is also swinging at pitches in the zone at an abnormally-low rate, with a swing rate on pitches inside the zone of just 58.0 percent, by far the lowest of his career.

One good thing is that Stanton isn't getting frustrated and chasing pitches out of the zone, choosing instead to take his fair share of walks in order to get on base.

Another problem is that when Giancarlo is getting pitches to hit, he's not making good contact. Stanton has a line drive rate of just 7.1 percent this season and nearly 16 percent of the time he has put the ball in play, it hasn't made its way out of the infield, which is more than twice the normal rate for his career.

If and when Giancarlo Stanton starts hitting again, it'll have to be from his other Marlins teammates picking up some of the slack. Stanton in the batters' box will strike fear in the heart of any opposing pitcher, but it won't matter all that much if the rest of his teammates can find a way to make them pay for mistakes. If they don't, it'll be national news if Stanton finds more than a few pitches to hit over the course of a game.

The bottom line is that it's still early and at some point in the next couple weeks, we'll see Giancarlo go on a rampage against opposing pitching staffs, making much of these numbers invalid. The man was nearly a six-win player in terms of fWAR last season, and that's after only playing in just 123 games, in addition to the aforementioned slow start. Right now, however, the player who is now undeniably the cornerstone of the organization is finding it tough to do what we've become so accustomed to seeing him do: mashing baseballs.