Who has been the best Miami Marlins player on offense? Justin Ruggiano, and it has not been close. Here is a look at Ruggiano's 2013 season so far.

Share All sharing options for: Justin Ruggiano: The lone Miami Marlin (on offense)

Quick: name the Miami Marlin with the best wOBA.

Based on the name of the article, you would guess it would be Justin Ruggiano. In fact, it is Chris Valaika, who has put up a .280/.333/.400 (.323 wOBA) line in 27 plate appearances. But it speaks volumes that Valaika, who has gotten fairly lucky in his 27 appearances (.389 BABIP), still is not outhitting Ruggiano by much despite a sample 2.5 times smaller than the starting Marlins outfielder's. Ruggiano is keeping pace among Marlins starters with a .238/.294/.444 (.321 wOBA) batting line.

So how is Ruggiano doing all of this despite his teammates' eminent struggles? Well, the truth is that Ruggiano is also struggling to a degree. His average on balls in play of .255 is nothing like his through-the-roof 2012 season, but it also is well below what was projected of him before the start of the year. Ruggiano is hitting just .182 on ground balls, and the average major leaguer hits around .200 on those balls in play, so the regression for Ruggiano is clear. Once he sneaks a few more balls through the infield, he should see an uptick in his batting average. 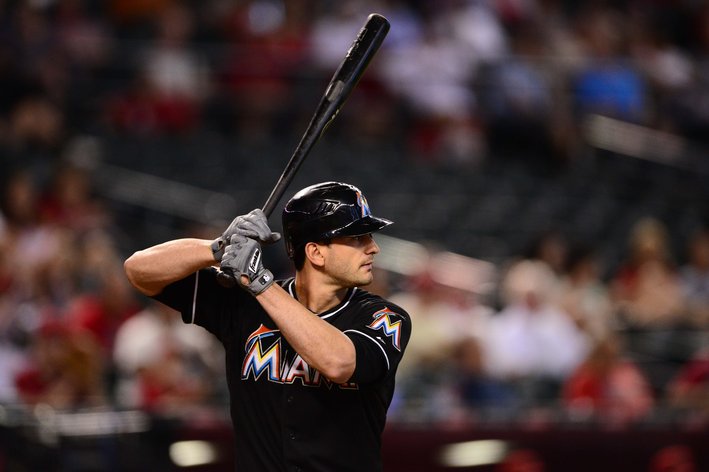 Although at the time it seemed like a minor deal that would provide Miami's minor league affiliates with some outfield depth, the Marlins trading for Justin Ruggiano last season has continued to make the organization look good.

If that does happen and all of Ruggiano's remaining 2013 numbers remain similar, he is in for an excellent 2013 season. Thus far, Ruggiano has managed to repeat his power performance from last year amid a Marlins team struggling to generate power all year long. Ruggiano's .206 ISO is very similar to last year's .222 mark. His home run per fly ball (HR/FB) rate is also similar to last season's at 15.0 percent. He is outperforming all of his projections in the power department.

For some, this should not be a surprise. Mike Podhorzer of FanGraphs's RotoGraphs fantasy baseball section looked into the power numbers of Ruggiano to see if he could make any sense of them. He found one bit of information that stood out to him.

But what these projections are seemingly not taking into account is this number: 310.51. That’s the average distance of Ruggiano’s home runs and fly balls last year. That ranked third in all of baseball. The crazy thing is that this distance only resulted in a HR/FB ratio of 16.7%. As you may recall, I found a significant correlation between batted ball distance and HR/FB rate, so if anything, Ruggiano may have actually been a bit unlucky last year in his HR/FB rate.

Ruggiano had the third-longest average fly ball in baseball last year, and that should have yielded more home runs than it did last season. Even with some regression, it should not be a surprise to see Ruggiano continue to hit for power at a decent clip, and he has proven just that to begin the 2013 year.

Ruggiano's game has not changed in the power department, but he has changed a bit in the plate discipline area. He has struck out and walked at a lower rate than he did last year, down to 18.8 percent and 7.2 percent respectively. The drop in strikeouts is particularly interesting because this is one of the most problematic areas in Ruggiano's game. How did he accomplish this drop in true outcomes?

Ruggiano's major change in his approach thus far is that he is swinging more often, but in particular more often at pitches inside the strike zone. That change is significant because it shows a level of selectivity in his aggressiveness, and it adds a benefit to his game. Given his similar contact rates, the change in swing rate in the zone is a positive because a contacted ball is better than a called strike, all things considered; called strikes can yield strikeouts and cannot be turned into positive events, whereas swings can yield foul balls (strikes that cannot result in a strikeout) or balls in play, which are both more valuable than a generic strike.

So Ruggiano is maintaining his power from the 2012 season and changing his approach slightly at the plate to be more selectively aggressive. Both of these developments are positive signs for the 2013 version of Ruggiano, and thus far they have made him the only offensive "force" on the Marlins this season.