Although at the time it seemed like a minor deal that would provide Miami's minor league affiliates with some outfield depth, the Marlins trading for Justin Ruggiano last season has continued to make the organization look good.

It wasn't a fire sale trade, and it most likely won't be remembered as one of the best baseball deals in Miami Marlins history. Trading for outfielder Justin Ruggiano last May, when the Marlins were in need of an outfielder and some offense, is a move that continues to make the Marlins' scouts and baseball executives look like they actually have an idea of how to put a winning baseball team together.

When Miami traded for the outfielder, he had only played in 46 major league games as a member of the Tampa Bay Rays in 2011. Ruggiano was playing in the Astros' minor league system when the Marlins called.

Ruggiano was hitting .375 with an on-base percentage of over .500 in 138 plate appearances with Triple-A Oklahoma City before he was acquired by the Marlins.

After the trade, then manager Ozzie Guillen and the Marlins weren't hesitant to immediately give Ruggiano some playing time. The team was in need of offense, and Ruggiano provided just that.

Following several of the mid-season traded Miami made, Ruggiano continued to produce. In 91 games, he hit .313 while hitting 13 home runs. He also got on base at a .374 clip, the highest of his young career.

Despite having some back problems to begin the season, Ruggiano has continued to produce. Though he has just a .259 batting average, he leads the team with three home runs and has kept his on base percentage above .300 (.317).

Ruggiano: the lone Marlin (on offense) 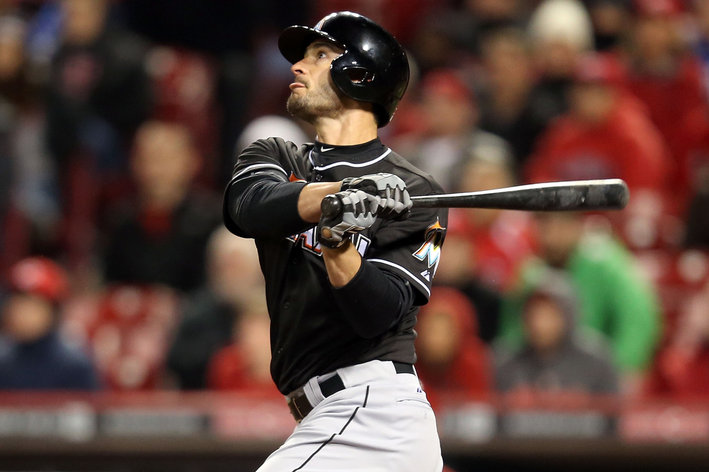 Who has been the best Miami Marlins player on offense? Justin Ruggiano, and it has not been close. Here is a look at Ruggiano's 2013 season so far.

A late home run by Ruggiano on Friday night gave the Marlins a win over the Reds. Guillen loved having Ruggiano in the lineup, and manager Mike Redmond feels the same way.

"He's a guy who can hit in the middle of our order," Redmond said. "We don't have a lot of power in our lineup, but he's one of the guys that we've got who can hit the ball out of the ballpark. He's done a nice job. He's given us good at-bats."

For the past few years, the Marlins organization has been criticized for making trades that haven't worked in their favor. The Ruggiano deal, though, is one that might have gone unnoticed at the time, but looks better by the day.