The Miami Marlins stayed close once again against the Cincinnati Reds, keeping the game tied at two runs apiece into the seventh inning. But the Reds broke out against Alex Sanabia and Jon Rauch and a ninth-inning rally fell short in a 10-6 loss.

The Miami Marlins, as has been customary for them for much of the regular season thus far, at least stayed close in this game against the Cincinnati Reds. But just like in the first game of the series, a close start turned into an ugly finish, as the Marlins were promptly blown away by a breakout seventh inning, as Alex Sanabia and Jon Rauch combined to give up eight runs to turn a tied ballgame into a laugher.

Sanabia was not disguising his game as anything but mediocre. Yes, he had allowed two runs through six innings, but that performance was bailed out by some timely defense and good luck. Up until the seventh inning, Sanabia had struck out three but walked four and allowed five hits along with two hit-by-pitches to Choo. That means that Sanabia stranded seven runners in those innings out eight total, and that was done without much use of the strikeout.

On the other hand, Sanabia was still fooling batters with his surprisingly confusing stuff. Just like in his first few starts, Sanabia was getting swings-and-misses without strikeouts, getting 12 whiffs in 109 pitches thrown. Unfortunately, he is simply failing to put his other pitches in the strike zone, as clearly indicated by this massively erratic location chart. 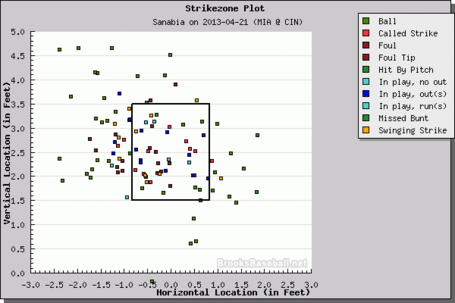 No matter how many whiffs Sanabia gets, he cannot pitch well without throwing some pitches in the strike zone.

The Marlins' hitters failed in the early going to get a chance at a lead. The Fish loaded the bases in the fourth inning with two outs before Donovan Solano struck out and did not capitalize on the opportunity. The team also got a runner to second after a Chris Valaika RBI single, only to fail to drive him in as well. The team's only extended burst of offense came in the ninth inning with the game well out of hand, as Giancarlo Stanton broke out of a three-strikeout game and finally delivered his first RBI of the season. Miguel Olivo then followed with a three-run home run, but the effort still fell way short of a win.

The Miami Marlins will visit the Minnesota Twins and Target Field tomorrow for the start of a quick two-game series for the first time since the stadium's opening.