The Miami Marlins faced a dominant Mat Latos on Friday night, but managed to hold on, and win the game thanks to a ninth inning home run off Aroldis Chapman.

One of my least favorite players in baseball, Mat Latos, can pitch very well when he is "on." Latos was "on." The tall, ugly right-hander struck out ten Marlins batters, while only walking one in seven innings pitched.

He wasn't perfect, however. The Marlins managed to get to Latos in the third inning, stringing together two consecutive singles to start the inning. Slowey did his job and sacrificed bunted, advancing the runners to scoring position. Juan Pierre was called out on strikes, placing the hopes and dreams of Marlins fans and Latos haters on Placido Polanco. Polanco delivered, hitting a one hop ground-ball to right field. Donovan Solano made an ill-advised attempt to score and was tagged out at the plate.

Kevin Slowey has been an interesting pitcher to watch so far this year. I have always viewed him as an example of why strikeout-to-walk ratio is not a great indicator of success. His career 4.56 strikeouts-to-walks is excellent, but this is largely the result of very solid walk rates. His strikeout numbers are lackluster, and consequently he possesses a career 4.55 earned run average.

Despite all this working against him, Slowey leads the Marlins staff with a 1.90 ERA in four starts. He managed to pull off another unlikely solid start last night. A great example of his luck was in the bottom of the second inning. After walking Jay Bruce and allowing a line drive single to Todd Frazier, Chris Heisey lined out to left field, and then Ryan Hannigan hit into a double play. Probability did the work for Slowey, not strikeouts.

After easily retiring Chris Valaika, the normally lights-out Aroldis Chapman made a series of mistakes facing Ruggiano that resulted in a very, very big run for the Marlins. Let's break down the plate appearance. 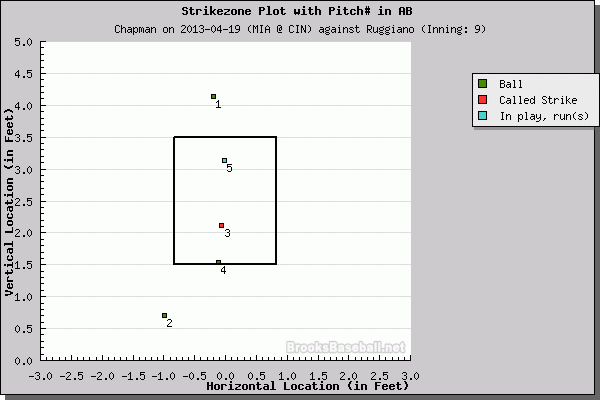 Chapman's first two pitches were both fastballs that came no where close to the strike zone. He got his fastball working again and snuck a fastball in the lower half of the plate. Ruggiano, apparently looking for a high pitch, wisely refused to swing. Chapman tried to repeat his success with the last pitch, but ended up putting it lower than the last one, and neither Ruggiano nor the umpire were impressed. With a 3-1 count and a tie game, Chapman was seemingly determined to not walk a batter, so he lazily threw a belt-high fastball. Justin Ruggiano was ready, and he muscled the pitch out to left field.

Two runs were enough for the Marlins last night, as Steve Cishek closed out the game for a save.