The Miami Marlins got a huge, game-winning boost of offense from Justin Ruggiano, as he delivered his third home run of the season in the ninth inning against Cincinnati Reds closer Aroldis Chapman.

The Miami Marlins were able to hold down the Cincinnati Reds's offense in tonight's game, but as always, it was going to be the offense that would struggle. It did not help matters that the Marlins were facing an excellent talent on the mound in Mat Latos, who struck out 10 Marlins in just seven innings and more or less looked like he was cruising.

But the Marlins' pitching staff was once again able to keep the team in the game, and it allowed for the offense to finally get its much-needed shot in the arm. That "shot" was delivered by Justin Ruggiano in the form of a solo home run to give the Marlins the lead and eventually the 2-1 win over the Reds.

As you can see, the home run does not get far past the center field wall at the Great American Ballpark, but it does land comfortably on the stairs and bounces off away from the fans. For Ruggiano, it is his team-leading third home run of the season, and in fact it is only the Marlins' fifth homer of the entire year. The other two players who each own one home run are Greg Dobbs and Adeiny Hechavarria, so as of right now, Ruggiano owns the power crown on the Marlins.

For Chapman, that was his first home run allowed this year, and indeed it was his first run allowed in 2013. The crew at SB Nation's Reds blog Red Reporter mentioned in the game recap that Chapman's prior pitch, a 2-1 fastball that was called a ball despite appearing like a low strike, may have affected the game in that it took away Chapman's options against Ruggiano. Using Pitch F/X data provided by Brooks Baseball, we can take a look at the pitch versus an average strike zone. 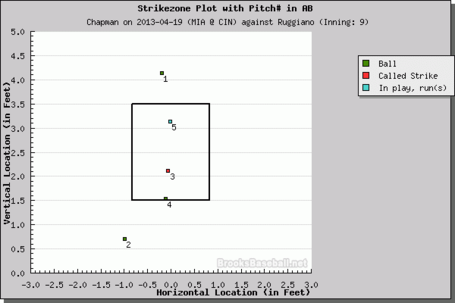 The fourth pitch was the 2-1 pitch in question. While it could certainly have been called a strike, this zone does not make it seem as though it was an obvious strike, as it looks like it was a borderline pitch. Such borderline calls are usually 50-50 decisions made in the heat of the moment by the umpire, so one can hardly blame home umpire Bill Welke from making a bad call. It was at best a judgment call for him.

Ruggiano's home run gave the Marlins a one-run lead that they were able to defend in the bottom of the ninth, as Steve Cishek came in and shut the door to deliver the team's fourth win of the season.