Yes, even Miami Marlins rookie phenom Jose Fernandez is human. Fernandez struggled through four innings and gave up six runs last night versus the Cincinnati Reds. Here is the breakdown of what happened.

Prior to last night's start versus the Cincinnati Reds, Miami Marlins fans all thought Jose Fernandez was some sort of god among men playing a children's game. But as the Reds showed in last night's 11-1 blowout, even Fernandez is mortal, and so we are led to today's discussion of how Fernandez performed in his first bad start. Just what went wrong against the Reds that did not fail Fernandez against the New York Mets and Philadelphia Phillies? Once again, we will check out the Pitch F/X data from last night.

Fernandez threw 79 pitches, but was pulled mostly for poor play rather than just his pitch count. As expected, he turned primarily to his four-seamer and curveball against the Reds. The four-seamer had its typical velocity, averaging almost 96 mph and not dipping under 94 mph for the entire game. The curveball had its typical break, very similar to the movement it showed in his last two outings.

As far as swings and misses, Fernandez generated seven whiffs in 79 pitches, which is right in line with what he averaged over the course of the season but a bit below what he was doing in his fantastic first start. The whiffs primarily came from the fastball, as Reds hitters missed five of them on their swings. Each of the curve and changeup induced one swing and miss as well. A lack of whiffs does not seem to be the problem, though a high-strikeout pitcher like Fernandez is expected to get a few more than around nine percent of his total pitches. Fernandez still struck out four batters in four innings along with the rest of his ugly line, so he was still fooling some hitters at the plate.

The problem from last night? Control.

Against the Mets and the Phillies, Fernandez was on top of the strike zone, and the strike-pounding nature of his pitches helped him stay ahead of batters and avoid mistakes. The Mets start was fantastic because he was not only working well in the zone but also inducing all sorts of swings and misses, but in the Phillies start, Fernandez only got three whiffs. He compensated by inducing 22 called strikes out 55 total pitches taken, which allowed him to use those swings and misses when needed most. He still struck out five in six innings in that game.

But the more important thing beyond the called strikes was that every pitch in the zone avoided contributing to a walk, and that is where Fernandez struggled most last night. He walked three hitters in four innings and was wild compared to his first two outings. For example, look at the location of his pitches versus right-handed hitters against the Mets. 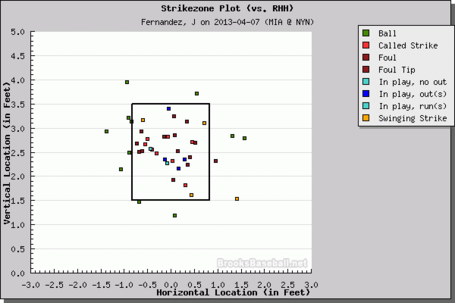 Compare that to his pitches to righties against the Reds last night. 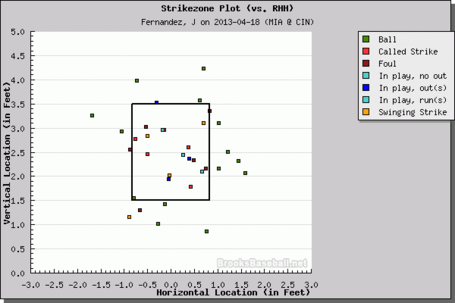 His pitches were not only off of the zone, but many of the balls were not even remotely close. Whereas prior to this game, Fernandez had been clustering his pitches in the strike zone and spotting them well near the edges, he went wild last night and was unable to work around the corners.

But with nothing mechanically wrong with Fernandez's pitches, it is hard to pinpoint a reason behind his struggle with control after two honed-in games. The most likely explanation is to just chalk it up to a bad game and try again next time, and that is what most Marlins fans would probably say in this case. Fernandez still looked very good, his stuff was still present, but small factors in the environment and how he felt during the game likely contributed to a bit of a wild night. It is not something Fish fans should concern themselves about after one start, but at least we know that he is capable of having bad starts. Let's hope this is a one-in-a-million occurrence for the future star.