Buster Olney of ESPN.com mentioned an "educated guess" of the four frontrunners to acquire Giancarlo Stanton from the Miami Marlins. Let us look at the four teams and see if they have the prospects to make a deal happen.

Let's just (again) get one thing straight: the Miami Marlins will not trade Giancarlo Stanton this season.

The Marlins do not seem interested in trading Stanton. There is very little gain for the Fish to make a move now when the trade packages from other teams are unlikely to waiver from now until the end of the season. Also, if the Marlins wanted to trade Stanton, why do it now instead of at the beginning of the year? Much of the team's in-season marketing campaign is based on Stanton, and the fans are desperate to cling onto the club's remaining superstar (though Jose Fernandez is gathering himself a nice bandwagon), so the club sacrificed an opportunity to sell the future of the franchise before the season began by keeping Stanton then trading him in-season.

Having said that, rumors continue to swirl about Stanton, and it is our civic duty here at Fish Stripes to look at them with a keen analytic eye. Buster Olney of ESPN.com states that Stanton has more trade value (Insider required) than Tampa Bay Rays pitcher David Price as of right now, but more importantly he mentions an "educated guess" at four teams that are the "frontrunners" for Stanton's services. Those teams are the Texas Rangers, Seattle Mariners, Detroit Tigers, and St. Louis Cardinals. 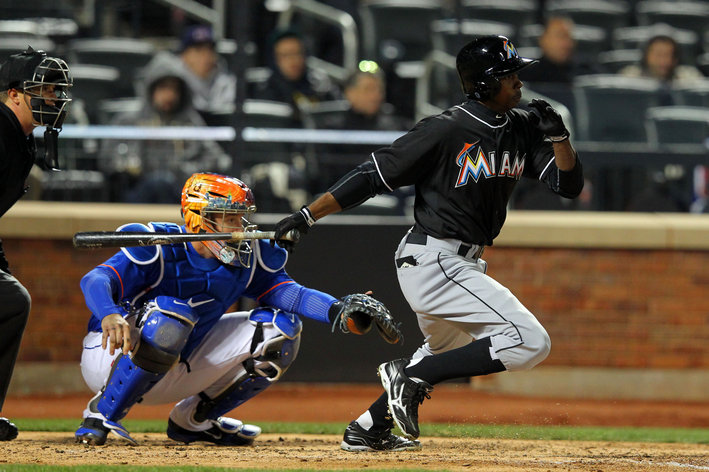 With Giancarlo Stanton struggling and out with injury, the Marlins' lack of power has become extremely apparent.

To indulge in the rumor-mongerer inside all of us, let's take a look at these four teams and see which ones would be the best fit for the Fish.

The Rangers rumors have been persistent for much of the season. We discussed it in the offseason, and this past weekend we learned that the Rangers may be preparing for a Stanton offer, so there is smoke in that fire, and rightfully so. The Rangers are in a prime position to acquire a talent like Stanton they have a top-notch farm system, bolstered by the best prospect in baseball, but also are not in rebuilding mode and would most benefit from a large addition like Stanton. In a competitive AL West, the addition of a six-win player like Stanton would be huge.

Any trade package at this point would have to include both Profar and Olt. Profar would slide immediately into shortstop and form a spectacular defensive tandem with the Gold Glove-caliber Adeiny Hechavarria, while Olt would fill the third base hole the team has had for almost seven years. It is almost a perfect match for the offensively-starved Marlins to pick up two elite hitting prospects, one of whom is almost sure to anchor the middle of the infield for years to come.

The problem is the third non-filler piece. The Marlins would almost certainly want an impact third acquisition, and the Rangers' choices include Martin, who certainly has questions and tools despite a good 2012 season in Triple-A, Martin Perez, who has fallen on hard times prospect-wise, and a number of other pitching prospects who will not be ready for a little while. Because the Rangers are interested in competing now, they cannot afford to toss a cost-controlled good player from their major league roster either, leaving them to send an enormous package of mid-level prospects to make up for the lack of a third piece.

The Mariners have the opposite appeal than that of the Rangers'. The Mariners can offer more high-quality players (though they cannot offer the best prospect in baseball, and that does hold significant weight), but the players do not fit the Marlins as well as the Rangers' acquisitions would. Mike Zunino could be ready to man the backstop by next season, but the Marlins have something of a promising player in Rob Brantly already manning catcher. The other two players, Walker and Hultzen, are pitchers who would add a lot of depth to the Marlins' growing group in the minors, but they would be crowded alongside lesser guys like Justin Nicolino, Andrew Heaney, and Adam Conley. They would immediately be first in line to head to the majors, but they would see fierce competition with Jose Fernandez, Jacob Turner, Nathan Eovaldi, and Henderson Alvarez already looking for slots.

The team's fit may be low, but do not underestimate the Marlins' desire to always grab more pitching. Both Walker and Hultzen are fantastic prospects, and the Marlins may be hoping to grab as many good lottery tickets and see how the five best pan out. The team can always reallocate some of those players to fit future offensive needs.

Of the four, this is the least likely combination to come out. Though the Marlins and Tigers have made deals in the past, the Fish are never too happy about the results on their end, and that has much to do with the Tigers' aggressive promotion approach with pitchers. Andrew Miller failed the Marlins, and Jacob Turner has not looked great in 2013 thus far, so the Fish are likely a little more wary of dealing with the Tigers.

That said, the Marlins could at least get a third baseman of the future in Castellanos, whom the team attempted to acquire before the season began. The remaining players, however, are underwhelming and in positions of relative depth for the Fish. The Tigers would be willing to give up some cost-controlled major league talent, but that talent is basically restricted to Rick Porcello, who is not much of a catch these days. The rest of that roster was acquired via free agency or grown into superstars organically, so the Tigers are not likely to let go of those players so easily. This partnership is highly unlikely.

This may be the best fit for the Marlins in terms of high-end acquired talent, as the Cardinals boast a legitimate contender to the top prospect crown in Taveras as the centerpiece of a trade pacakge. Miller would be an excellent second choice and would fulfill one of the team's important considerations: two top-10 prospect talents. Martinez is a perfect third prospect for the deal, meaning that the Cardinals would already have what it takes to make a move right now, provided they add some small filler in the deep minors.

The problem is that the Cardinals do not have a spot for Stanton this season. They would easily have one next season, when Carlos Beltran's contract runs out. But as of right now, Matt Holliday, Jon Jay, and Beltran hold the top three outfield spots. Unless the Cardinals are willing to chance an athletic but inexperienced Stanton in center field or shift Beltran back to his old spot in center, the Cards would have to bench Beltran. Of course, acquiring Stanton means you bench anyone in the nearest available position, so that may not be a difficult move for them.

You wonder, however, if the Cardinals would be willing to make a trade with the team already having an outfield replacement in Taveras himself. Stanton is a guarantee, while Taveras is still a prospect, and a boom-bust one at that, so it is not sure thing that Taveras steps in in 2014 for Beltran and takes off. But would the Cards be willing to trade Miller and Martinez along with others to secure that chance?

All of these trades have question marks on them, and the Marlins will have many choices to make if and when they decide to trade Stanton. It will not be this season, as there are too many hurdles and not enough urgency to do a deal. But if it comes down to it, the Marlins should certainly look at the Texas Rangers and St. Louis Cardinals as major candidates for a move.

Stay tuned to all of your Giancarlo Stanton trade rumor needs right here at Fish Stripes.