The Miami Marlins come out hitting against Dan Haren and the Washington Nationals, as they top off an eight-run game with Adeiny Hechavarria's three-run home run, the first homer by a Marlin in Marlins Park in 2013. The Fish win 8-2.

For perhaps the first time in the 2013 season, the Miami Marlins played a mostly complete game of baseball. The Fish put up a season-best eight runs against Dan Haren and the Washington Nationals, and that burst of runs was capped by Adeiny Hechavarria's three-run home run. Hechavarria's shot to left field broke a nine-game Marlins homer-less streak, and it also reactivated the wondrous Monstrosity in center field, as it was the Marlins' first home run at Marlins Park this season. And the home run was a beauty too, a no-doubt laser off an 85 mph floater of a pitch by Haren. Hechavarria's compact swing sent it flying fast.

But Hechavarria was not the only player contributing offensively. Justin Ruggiano drove three runs in with a single and double on the night, while Greg Dobbs got two hits and drew a walk as well. Juan Pierre knocked three hits, stole two bases, and scored two runs thanks to the middle of the order. The entire Marlins roster, save for Chris Coghlan and Donovan Solano, got at least one hit, including starting pitcher Alex Sanabia. 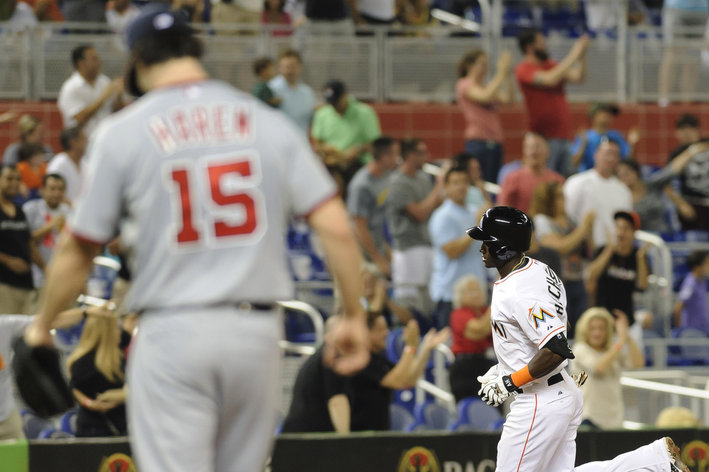 A throwing error by Ryan Zimmerman started a series of events that put the Washington Nationals down early to the Miami Marlins and the Fish held on for their third win in 14 games.

Speaking of Sanabia, he did his usual act of stranding baserunners despite allowing more than expected. He walked three and allowed six hits in six innings. This means he allowed nine baserunners in six innings and only allowed two to score, leaving him with a slightly above-average 78 percent strand rate. But he also only struck out three batters, thus relying on the Marlins' defense a little too often. The Fish helped by converting two double plays.

The Marlins will go for the series win and will turn to Ricky Nolasco tomorrow night against the Nationals before heading out on the road for a four-game series against the Cincinnati Reds.