It's just two weeks in the season but it's clear that the Miami Marlins are clearly lacking in the power department. Will things get any better?

Share All sharing options for: The Miami Marlins' power outage

As we wrap up the second week of the 2013 MLB season, it's clear that the Miami Marlins are more than likely on their way to a losing season. And much of the struggles they've had to this point (unsurprisingly) have had to do with their offense.

Though the offense has sputtered, and that's putting it nicely, pretty much across the board, the most significant area of weakness (again, unsurprisingly) is in the power department. Coming in to this season, many viewed Giancarlo Stanton as the main source of muscle in the Fish lineup and so far, he's provided zero long balls and was out of the lineup for the third time this season due to a sore left shoulder. Though the extent of Stanton's injury doesn't seem to be too serious, a shoulder injury for a hitter, especially one with Stanton's power, could be a reoccurring and troublesome issue for the rest of the season.

But before we go further with any more speculation, let's just take a look at where Miami stands as a team, paying particularly close attention to power metrics.

It doesn't take the world's smartest detective to figure out that therein those numbers lies a pattern. After scoring zero or one run in eight of their 13 games this season, we realize that this team struggles to hit, but these numbers show that they sure as heck can't hit it out of the ballpark even when they make contact. Last season, the Seattle Mariners had the lowest team slugging percentage in all of baseball at .369, a mark that must seem like some sort of dream scenario for fans of the 2013 Marlins.

We understandably have to take these numbers after two weeks with a grain of salt considering how small of a sample we're looking at, but the fact of the matter is that this team is underachieving expectations in the power department after the bar had already been set considerably low at the outset.

Right now, there are prospects with light-tower power anxiously awaiting their turn in the minor leagues. No veterans on the roster throwing caution to the win by cementing their reputation as a "three true outcomes" player.

In fact, the only current Marlins regular besides Stanton who has played in at least 100 games in a season with a career SLG above .400 is Placido Polanco, checking in at a monstrous .402. I guess this means Mike Redmond knew what he was doing hitting Polanco in the cleanup spot? Maybe that "nude batting practice session to loosen everyone up" is going to have to happen sooner rather than later. 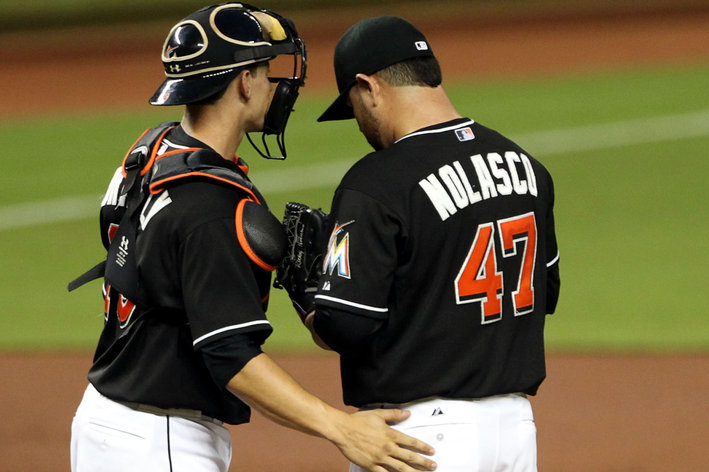 The Miami Marlins' starting pitching staff was supposedly a silver lining to this young 2013 season. However, the truth is that, outside of Jose Fernandez, the staff is actually not pitching all that well.

Jokes aside, this is a sobering statistic. The long ball doesn't necessarily guarantee you success as a team, but when you throw out a lineup night after night that doesn't present any threat in the power department, it becomes easier to defend and pitch against. Opposing staffs feel more and more comfortable pitching to contact, unafraid to make mistakes or worry about the quick three-run home run that will swing all the momentum away.

As I write this, there's always the possibility that the Marlins turn the struggles they've had at the plate over the last two weeks into some sort of maniacal inspiration and proceed to use the rest of this month to unleash a barrage of home runs, the likes of which never seen before by the center field thingy. And for all we know, the next time Giancarlo Stanton complains of a sore shoulder, it'll be because he's tired of hitting so many baseballs into The Clevelander. But the truth is really isn't a quick fix to the problems the Fish are facing but one can only hope that these small sample sizes aren't an indication of what would be a historically bad problem.

Unrelated note: I will admit that it was very difficult for me to write these baseball-related words in the midst of learning about the horrific event that happened in Boston yesterday. My thoughts are with everyone in the the Boston area and I hope that these words can give some sort of distraction to all the awful things that we've been hearing about over the past 24 hours.