Miami Marlins owner Jeffrey Loria says that this team has a makings of a competitive core for subsequent seasons. The true test of that statement lies in the ability for the organization retain Giancarlo Stanton.

Miami Marlins owner Jeffrey Loria once again made comments recently defending the moves the organization made this past offseason, including the fire sale trade of November. On the most recent ESPN Outside the Lines podcast, quotes by are aired showing that he is adamant that the franchise is moving in the right direction after what he perceived was a mistake in 2012. The team lost a reported $47 million last season, and now it is trying to right the ship by cutting payroll, focusing on the future, and looking to build a competitive roster down the line.

As part of defending the moves, Loria claimed that the Marlins have the pieces for a competitive core in the years to come. He did not state specifics, but he mentioned that the team has a number of young players with bright futures who could be ready to contribute very soon. Of the players the Marlins have now, Loria specifically points out Adeiny Hechavarria (without referring to him by name and instead by "the new shortstop") and Giancarlo Stanton as players who could help the team down the line.

The problem with this statement lies in the mention of Giancarlo Stanton. Ideally, the Marlins would have him as a future piece around for the long haul as the franchise rebuilds itself again. But just as these comments come out, trade rumors swirl about the star outfielder, as the New York Mets show interest in acquiring Stanton and the Texas Rangers are preparing to make an offer for Stanton. Any discussion of a potential future core may not end up including the Marlins' current best player.

Jeffrey Loria "not here to be involved with losing baseball" 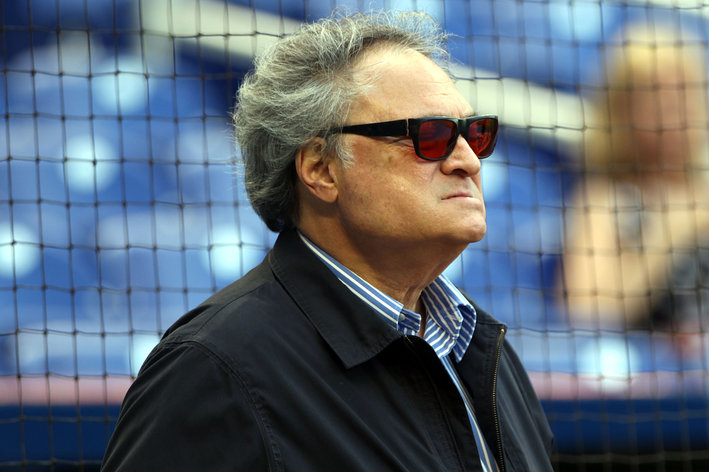 Miami Marlins owner Jeffrey Loria came out and spoke with media with regards to the Marlins and their chances of winning. Loria "won't stand for losing baseball," but he has not proven winning baseball will ever come to south Florida.

But if Loria and the Marlins organization are indeed focused on creating a brand of "winning baseball" in Miami and a "competitive core," their true test will be how they handle the Giancarlo Stanton situation. Let us assume that everything that the Marlins have stated about their intentions is true. The organization has done nothing in the past season to assure that a competitive core will stick around in a Marlins uniform for the next few years. The only current core pieces on the roster are Stanton and Jose Fernandez. Fernandez is team-controlled, but with teams jumping aboard with players with early contract extensions, the Marlins may have to follow suit quickly in order to retain him.

Stanton, on the other hand, remains the true challenge. If the Marlins are serious about building a competitive team, they need to go all-out in a last-ditch effort to retain Stanton. The organization needs to prove to its best player that his long-term future is safe residing in south Florida, something that they were eventually not able to do with free agent signings Jose Reyes and Mark Buehrle. The Marlins need to show that Stanton staying in Miami will help bring a competitive club to south Florida, and that the organization will supplement that core as best it can with the money they have available. The team needs to prove to the fan base that it is willing to identify and reward its best players to keep them around for the eventual winning team.

Once upon a time, the Marlins felt like they were doing that. The team signed Hanley Ramirez and Josh Johnson to extensions that bought out free agent seasons. Even in their pre-Marlins Park seasons, they signed smaller contracts to help supplement their roster, though some of these moves were ill-fated. But with the most recent fire sale and the failure to address the Stanton extension situation in the last two years, it feels as though the Marlins are once again in flux with regards to spending and committing to a winning baseball culture.

A Stanton move may be the crux to not only keeping the team competitive in the years to come but also mending the fences with the fans. Marlins fans are attached to Giancarlo Stanton, and a Stanton trade, as inevitable as it may seem, would still be crushing to this fan base. If the Marlins put in an honest effort to re-sign Stanton long-term and succeed, Marlins fans would breathe a little easier and perhaps be more willing to invest into the team knowing that its best player should be around for a while. Signing Stanton is no guarantee that he will stay, but it provides a sign that the organization is moving in the right direction after a year filled with wrong turns.

Signing Stanton is, once again, a two-fold benefit. The team can secure the opportunity of a competitive core that Loria harped about in his comments, and the move may also help to bring back some fans who have felt disenfranchised by the organization. Without such a move, the Marlins will appear to be perpetuating the problem they already seem to have, that this organization is simply a temporary stop to a star player's permanent home.