Miami Marlins owner Jeffrey Loria came out and spoke with media with regards to the Marlins and their chances of winning. Loria "won't stand for losing baseball," but he has not proven winning baseball will ever come to south Florida.

Share All sharing options for: Marlins owner Jeffrey Loria "not here to be involved with losing baseball"

This past weekend, ESPN's Outside the Lines podcast had a roundtable discussion on Miami Marlins owner Jeffrey Loria. They recapped all of the ugliness of the 2012 offseason and the subsequent bad start that the 2013 Marlins have had and they asked Jorge Sedano of WQAM, Joe Capozzi of the Palm Beach Post, the infamous Jeff Passan of Yahoo! Sports, and ESPN's own Darrell Rovell to discuss the state of the team.

Within the discussion, Rovell's report also included quotes by Loria defending the current roster and the need to make this move. One of the quotes Loria made included him saying that the Marlins are not a "Triple-A team" and that he is "not here to be involved with losing baseball."

This comment was perhaps the most confusing of the chosen quotes by Loria. In other quotes, he defends the current 2013 roster by saying that players like Juan Pierre, Placido Polanco, Giancarlo Stanton, and Adeiny Hechavarria (who, by the way, is not even referred to by name but rather as "the new shortstop") are not "Triple-A players," yet Loria also lays out that their plan is for the organization to be competitive in the future, with a timetable of two to four years down the line being the goal. 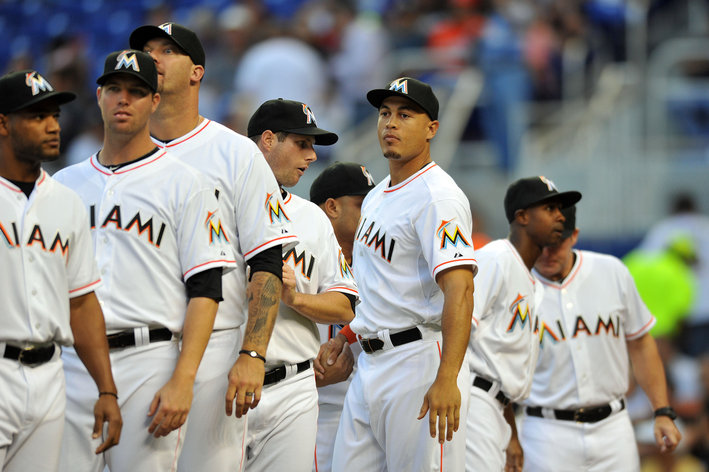 Miami Marlins owner Jeffrey Loria says that this team has a makings of a competitive core for subsequent seasons. The true test of that statement lies in the ability for the organization retain Giancarlo Stanton.

Of course, Loria is trying to sell winning Marlins baseball to a demoralized fan base, but in my view, his pitch is not effective. If Loria does not want to be involved with "losing baseball," he certainly sent mixed signals with the fire sale trade that guaranteed losing baseball in 2013. Loria can say all he wants about the current roster, but of the names he listed, only one player (Hechavarria) has a very good chance of remaining on the Marlins past 2014. The two veteran players are simply stopgaps for the 2013 season, and neither player guarantees success or winning baseball this year. There is no way to defend Loria's statement for this season, as the roster is just bereft of much talent after Giancarlo Stanton.

But, as we probably suspect, Loria was probably referring to the Marlins being in a better long-term position heading into 2015 and 2016. Now that the roster is reloaded with prospects, the organization can bring up talent from the minors to supplement their core of Christian Yelich and Jose Fernandez. But as we discussed after the fire sale, the organization's cost-cutting ways have likely damaged their already-bad reputation with free agents and their own players. As Passan notes later in the Outside the Lines podcast, Loria's personality also grates on Marlins players and could negatively interact with their future negotiations with the team. There is already talk that the players right now "don't trust him," and that cannot change with Loria willing to field a bad team for all of 2013 just to bring payroll down.

So Loria is hard-pressed to prove that winning baseball will come to Miami either now or in the future. Yes, the organization set itself up better for the next few years by acquiring cheap talent, and if this were any other team, freeing up that kind of payroll would bring the promise of re-utilizing it to supplement a core of the roster or re-sign a critical piece. But the Marlins have failed to entice Stanton with a contract, and that problem may expand itself to other potential core pieces like Yelich and Fernandez if the team does not act quickly and intelligently. As for supplementing their core with free agent parts, the organization has destroyed its credibility with free agents and negotiations given the numerous times the team supposedly went back on its word.

So we go back once again to a basic problem. If the Marlins cannot retain their own stars, they will not have a core with which to compete long-term. If the Marlins cannot sign free agents to efficient market deals, the franchise will have difficulty supporting that core with talented players for a run at contention. So the Marlins, thanks in part to Loria's machinations, are stuck having difficulty retaining their own core players or signing new players, and that leads to this question: how can you win if you cannot keep your own guys or sign new ones? This equation does not add up to winning baseball in Miami, no matter what Loria says.