The Texas Ranges are one of a few teams interested in acquiring Miami Marlins star outfielder Giancarlo Stanton, but the Marlins are once again making it known that the team is "not interested" in trading Stanton.

Team after team--from Boston to Mets to Rangers and on and on--have checked in with Miami on Stanton, with "not interested" response from Ms

The Fish have apparently been fielding phone calls from other teams and telling them that the Marlins are not looking to trade Stanton as of right now. The Mets and Rangers both have top-30 prospects to offer to the Fish in return for a trade, so it is not as if the packages are so laughable as to be non-starters for the Marlins. For the Mets, it is Zack Wheeler and Travis d'Arnaud to start, while the Rangers can offer Mike Olt and baseball's top prospect, Jurickson Profar. 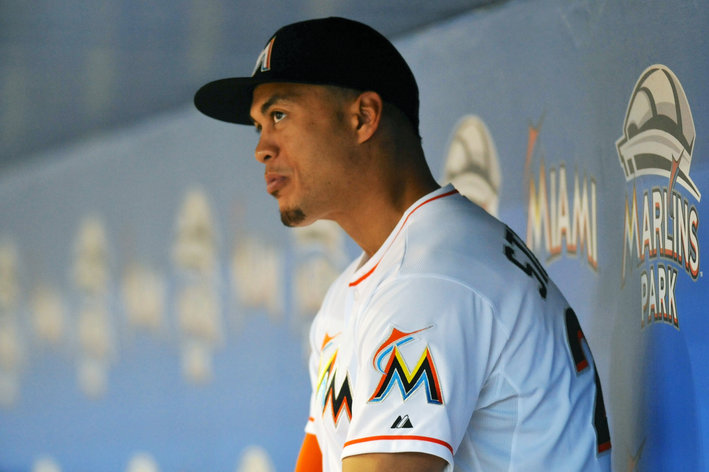 Rangers are interested in Giancarlo Stanton and are preparing an offer.

If those types of players are not currently enticing the Marlins, no two-player starting package will. And as of right now, no package should entice the Marlins. With the team capable of holding Stanton for all of the 2013 season and still getting similar offers for Stanton in the offseason, the team should not further bury itself in a public relations nightmare by sending its best player away midseason. It would be an even more disastrous 2013 season from an on-field and public relations standpoint, and it would be sacrificed for little gain, as a player as good as Stanton is unlikely to lose a ton of value by the end of the season.

While the Marlins own Stanton's rights, the team also has a minuscule chance of repairing their damaged relationship and convincing him to stick around. The odds may be extremely small, but if Jose Fernandez and other top prospect Christian Yelich can convince Stanton of a bright future with the organization and the Marlins deliver on the promise that the team is trying to build a competitive core, maybe the team can convince Stanton of an agreement.

That does not mean that the Marlins will re-sign Stanton, and i certainly have my doubts. But the organization's unwillingness to trade him now is understandable for many reasons on and off the field. If there is even a small chance for an agreement, the Fish should pursue it for as long as they can still get an enticing, multiple-prospect trade offer back from other teams. As soon as you feel players like Profar and Wheeler are beginning to slip out of the team's grasps, the time to trade is then imminent.