The Texas Rangers are still interested in Giancarlo Stanton, and they may be doing preparations for a potential trade offer to the Miami Marlins for Stanton.

The Miami Marlins have had to deal with a lot of Giancarlo Stanton trade rumors since the November fire sale trade, but the team has been adamant that they are not interested in trading the young star. Lately, however, the rumors have begun to swirl again with the team struggling, as the Texas Rangers are rumored to be in on Stanton once again after being considered a potential trade partner for Stanton in the offseason.

This time around, the Rangers are rumored to be making preparations for a Stanton offer (H/T MLB Trade Rumors). Supposedly the Rangers are doing their early reconnaissance and preparations to make an offer for Stanton to the Marlins. We know that the Marlins listen to all offers by team policy, so if they do offer, the Fish will at least pay attention before potentially hanging up the phone. 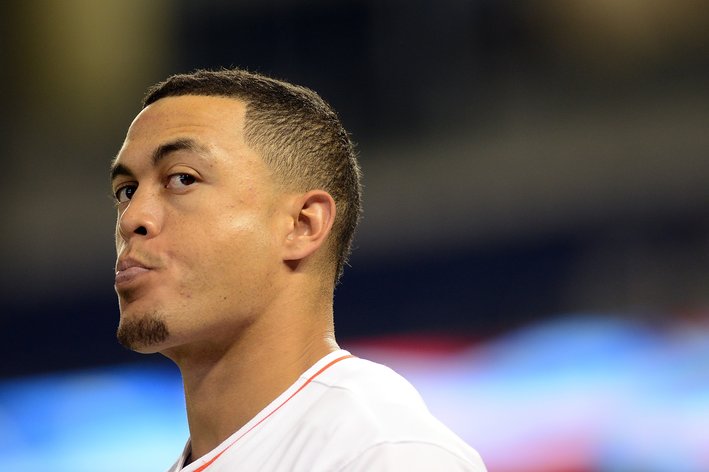 There may be many suitors for Giancarlo Stanton, but the Marlins are "not interested" in trading him as of now.

What has changed about a potential Rangers offer for Stanton to the Marlins since we last discussed it in mid-December? For one, the Rangers have already locked up one of their two shortstops in Elvis Andrus to a long-term extension, so the team has slightly less use for Jurickson Profar, the best prospect in baseball as of right now. Profar could easily be moved to second base for the Rangers, but if the team is to make an offer for Stanton, it would have to include Profar in the deal.

Other than the Andrus long-term signing, however, the situation remains the same as it was before. Stanton is still under team control for approximately four seasons. Profar was expected to be the top prospect in baseball heading into this year, and he was almost a unanimous selection in that regard; MLB.com, Minor League Ball, and Baseball America all ranked him as the best in the game by a small amount over St. Louis Cardinals outfielder Oscar Taveras. Olt, a well-regarded top 30 prospect, plays a position of desperate need for the Marlins, as the organization has few options in the minors at that position.

But more importantly, little has changed in terms of how much the Rangers can offer beyond Profar and Olt. Here is what I said in the last article regarding a potential trade offer:

The problem for both sides is that, as good as Profar and Olt probably are, they still are not guarantees like Giancarlo Stanton, and as such, this package is not enough to entice the Marlins to make a trade. The Marlins would likely ask for still more in return for Stanton, and that may include some pitching talent close to the majors. Sure, the Rangers may be willing to throw in Martin Perez into this deal, but the Marlins may want a cost-controlled pitcher who has proven some effectiveness, like Matt Harrison. In that case, the Rangers would balk...

The Rangers would still balk at a deal that did involved someone like Matt Harrison. The Rangers could offer quantity to the Marlins, tossing out two of Perez, Leonys Martin, Cody Buckel, and Justin Grimm to add onto the trade. But would the Marlins settle for an elite prospect, an excellent one, and a number of toolsy, around top-100 prospect types with no guarantee of success. The Fish would much rather have a cost-controlled asset who is major league ready and somewhat proven, but since the Rangers want to compete in 2013 going forward, they would almost certainly be dealing only with their prospects.

The Marlins would absolutely listen to any deal involving Stanton, as well they should. But the stance as of right now remains clear to me: the Marlins cannot trade Stanton now because he has too much value and could probably get them a similar package next season. If the Marlins trade Stanton to the Rangers following 2013 or even into the 2014 season, the team would still be able to receive Jurickson Profar, Mike Olt, and a bevy of other players. Doing it now is unnecessary.