The Miami Marlins came away with their second win of the season, beating the Philadelphia Phillies with a combination of Jose Fernandez's dominance and a dose of unexpected hits leading to a walk-off win.

The Miami Marlins backed a strong performance by Jose Fernandez with just enough offense versus Cole Hamels and the Philadelphia Phillies to come away with a victory. The Fish used timely hitting, including picture-perfect swing by Fernandez himself, to sneak past the Phillies to earn their second win of the year.

On the periphery, Fernandez's second career major league start looked almost as impressive as his first one. In six innings pitched, he struck out five batters, walked just two, and gave up two hits. He turned in a shutout performance against a decent Phillies lineup, so he must have done well, right?

Absolutely, but the way in which he did well was a bit on the confusing end. Facing down a lefty-heavy lineup, Fernandez was unable to produce the sort of swings and misses he received in his first start. In this one, Fernandez only got three whiffs from the opposing Phillies hitters, two of them on a curveball and one on a rarely-used changeup. Surprisingly, the Phillies were able to catch up to Fernandez's fastball a decent amount, as they made contact with all of the fastballs at which they hacked. This occurred despite the fact that Fernandez's fastball was just as fast as it was last time around, hovering at an average of 95.8 mph.

What did the fastball succeed in doing? Once again, Fernandez displayed extreme control of his extremely fast heat, as he threw 21 balls versus 14 called strikes with the pitch. That resulted in a 1.5 balls-to-called-strike ratio that indicates that he is placing the pitch decently in the strike zone.

What about his command? Did Fernandez have a plan at attacking this lineup? 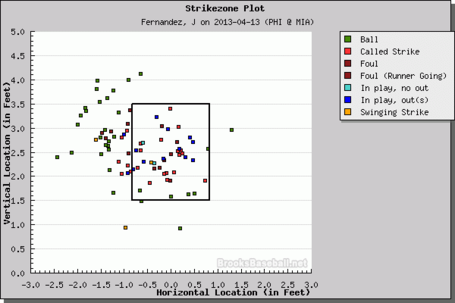 This chart, courtesy of Brooks Baseball, shows that Fernandez had a general idea of what to do against the lefty-laden Phillies. He worked primarily away from them, and the fact that only six pitches could be seen on the inner half of the plate against lefties is pretty impressive. For a young starter with electric stuff, Fernandez's top weapon may very well be his ability to place those weapons as well. You can argue about the pitches left in the middle of the zone, and you can see that a few of those turned into mistakes that were hit for balls in play that happened to land into gloves, but the fact that his location chart shows a clear and obvious pattern of location means that he was able to adhere to such a pattern.

But not only was Fernandez deadly on the mound, but he also succeeded in swinging a bat fairly well. Fernandez got his first major league hit tonight, and that hit happened to also bring a runner home. In the fifth inning, Adeiny Hechavarria slashed a two-out triple and led to Fernandez's sharply-hit single to the left side of the infield. Fernandez's first hit also drove in his first run, as Hechavarria scored to put the Marlins up 1-0.

The unbridled joy on Fernandez's face when he recorded that hit was a moment to behold. It is times like these that you believe you are watching players act like kids and playing the game they love. Fernandez clapped his hands and was extremely excited, enough so that he was later confused by the warmup jacket that was given to him.

Offense Struggles, then Walks Off

Having said all of that, the Marlins' offense struggled for most of the evening. Despite winning, the Fish put up just five hits, and two of those came in the rally in the bottom of the ninth inning. The Fish got those two two-out hits by Hechavarria and Fernandez and were blanked for a large swath of the rest of the game. The team failed to take advantage of a sixth inning situation in which they put runners on first and second with no one out. Greg Dobbs struck out and was followed by an Austin Kearns double play ground out.

The Marlins' ninth inning started fairly similarly, as they put a runner on board with a walk (Placido Polanco was on base in both occasions listed here). Dobbs then followed up this time around, hitting a sharp grounder that bounced off of Kevin Frandsen's glove and allowed Polanco to advance to third base. After a Kearns strikeout, Chris Coghlan delivered the game winner on a tapper to second base. Chase Utley had just enough trouble with the ball that it allowed Polanco to score and let the Marlins go home happy for a change.

Despite the Coghlan game winner, it was Dobbs's hit that was the most valuable, as the Marlins entered Kearns's plate appearance with an almost 94 percent chance of winning the game. Coghlan's play was the second-highest in value, followed by Fernandez's single.