The Marlins' early season woes continued in a painful loss to the Philadelphia Phillies on Friday night.

Ricky Nolasco lowered his earned-run average from 3.97 to 3.12 last night, although he did it using questionable stuff. The right-hander generated only four whiffs the entire game, striking out just one batter. At the same time, he demonstrated solid command, walking just one player. 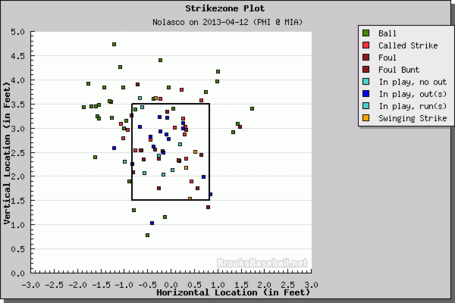 Nolasco relied entirely on letting the Phillies put the ball in play, and hoping that luck and good defense could turn those balls into outs. This strategy worked much of the time. At other times, the Phillies hit the ball very hard, getting four doubles off Nolasco. They finally turned these into runs in the sixth inning, when Dominic Brown doubled off a hard hit liner to left field, scoring Ryan Howard.

I would never argue that Nolasco pitched poorly, but I fear that on another night, and perhaps against a different team, he would have been shelled.

Marlins Come From Behind, Score Run

After falling behind in the top of the sixth, the Marlins managed to scrape together a run in the bottom of the inning. John Lannan hit Juan Pierre, giving Miami their fourth base-runner of the evening. Donovan Solano then grounded out, advancing Pierre to second base. Placido Polanco finally muscled a groundball through the infield, scoring Pierre and tying the game.

This meager offensive effort ended a fifteen inning scoreless steak for the Marlins. The team has now scored seventeen runs in ten games.

Nolasco left the game after six innings, forcing the Marlins to once again rely on an unreliable bullpen. A.J. Ramos, Mike Dunn, and Steve Cishek all pitched effectively, keeping the game tied through nine innings. The wheels finally came unhinged in the tenth inning with Jon Rauch on the mound.

Rauch seemed fine at first. He struck out Kevin Frandsen on four pitches. He fell behind with three balls to Ben Revere, then brought the contest to a full count, before ultimately allowing a single to right field. Rauch then forced Jimmy Rollins to pop out. Unfortunately, Chase Utley was too much for Rauch to contend with. The five-time All-Star smashed a triple to right field, ending the tie game. Rauch intentionally walked Ryan Howard in order to face Michael Young, but then he gave up a single anyway, scoring Utley.

The Marlins failed to start any action against Phillies closer Jonathan Papelbon, putting the ball in play three times, but never reaching base. Last night represented a painful loss for a team that has already endured six consecutive losses.