The Miami Marlins are struggling and tinkering with different lineups in an attempt to find lineup protection for Giancarlo Stanton. But while hitters are approached differently without protection, the outcomes remain very similar in value.

Greg Stoda of the Palm Beach Post mentioned that Miami Marlins start outfielder Giancarlo Stanton will need to develop more patience given his situation hitting in the middle of a punch-less Marlins lineup. Because the team has few hitters around him that can adequately "protect" him, it has been suggested that the Marlins are in a bad situation with their best player; he simply will not get good pitches to hit, and thus he will not produce for the team.

To that end, the Marlins have tried to help Stanton be patient. Hitting coach Tino Martinez stressed the usefulness of that virtue to him.

"He’s frustrated," Martinez admitted. "It’s easy to tell him to be patient and take the walks. But when he gets to the plate, a great hitter like him wants to hit. He knows he needs to be selective, because pitchers are pitching around him. He can’t help them out by swinging at pitches that aren’t strikes."

This is very true, and it is an issue that we discussed recently here on Fish Stripes. Indeed, Stanton is not seeing as many strikes as he was before, and that has had him flailing and missing often, perhaps in an attempt to "do too much" for the team. Manager Mike Redmond and others see this as an issue of a lack of "lineup protection," or the idea that a great hitter can be hurt and diminished in effectiveness if he is not surrounded by good hitters.

For a long time, lineup protection was deemed a "myth" by sabermetrics, but a couple of years ago, Tom Tango explained what he discussed in The Book: Playing the Percentages in Baseball regarding lineup protection.

There are two issues to consider:

In The Book, we looked at this topic. Luckily for you, it was excerpted a few years back at The Hardball Times (please read that). The first takeaway is that yes, definitely the players respond differently. And really, when you are talking about human beings in different situations, the expectation is that they should respond differently. After all, they are not automatons, are they? And they respond on the surface as you'd expect: the pitcher is avoiding the unprotected batter, which results in more walks (and more strikeouts).

So, score a big one for conventional wisdom.

But, even though there is a different response pattern by the players involved, that does not by itself mean that it favors one side or the other. Indeed, the result of our study shows that when it comes to putting the ball in play, there was no significant impact.

So, score a wake-up call for conventional wisdom.

Essentially, conventional wisdom is correct in stating that a hitter is approached differently without good hitters behind him. Fans have been right about that for years, and we ourselves see it in Stanton's treatment this season; he is seeing fewer strikes because pitchers do not have to throw to him. Last year, there was a similar calamity regarding Stanton's lack of protection in the lineup, and I pointed out a similar problem.

But here is where the whole "myth" discussion got out of hand. As Tango notes, while the hitter is indeed approached differently, the results end up being the same. From the linked Hardball Times excerpt:

What does that table mean? When a hitter is unprotected by a good batter behind him, he tends to walk more often (91 vs. 83 walks per 600 plate appearance) and strike out more often (108 vs. 104), but the value of the balls in play hit are almost exactly the same. In the end, what happens is that the value of non-walks is almost identical when comparing unprotected players versus protected players. The hits that unprotected hitters hit tend to be better by just enough to make up for the added strikeouts.

Stanton and His Strike Zone Struggles 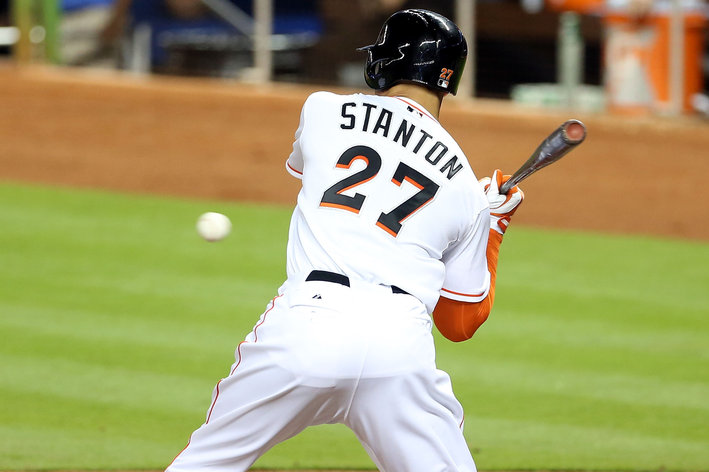 The first few weeks of Giancarlo Stanton's season have been filled with strikeouts, walks, and pitches out of the strike zone. He has yet to make the adjustment this early into the 2013 season.

It is this aspect that goes against traditional wisdom that a hitter would struggle with more pitches thrown at the fringes of the strike zone. In general, hitters do not suffer from problems with lineup protection, so we should not be concerned about Stanton's protection.

Rather than attempting to flip-flop the lineup to protect Stanton, the Marlins should focus on developing Stanton's patience so that he can avoid the pitfalls of this approach. He is seeing more pitches out of the zone, but he is also swinging at more pitches, meaning that Tino Martinez is right to work on his pitch recognition. Stanton simply needs to get to the average of what the rest of those good hitters in Tango's study were doing.

But what about the Marlins' issues with Stanton being walked? After all, Stanton is receiving more walks in situations in which walks are not as valuable. Is there something the Fish can do with their lineup to make that not happen? The problem with this issue is not who is hitting behind Stanton, but rather who is hitting in general. The Marlins have a bad lineup, so no matter what you do with Stanton's order in it, the team is still going to struggle to drive runners on base home. The overarching issue has a lot less to do with Stanton's protection rather than Stanton's teammates as a group. The Marlins cannot hit, and that is affecting the team's run production, but it has nothing to do with Stanton's proficiency at the plate.

In other words, the Marlins cannot worry about who is hitting behind Stanton. If they are going to worry about anything, it should be to improve Stanton's eye for strikes and to improve the teammates he has rather than simply shuffling them back and forth with no added benefit.