The latest rumors to come out of nowhere regarding Miami Marlins star outfielder Giancarlo Stanton involve the division rival New York Mets. The Mets want an impact outfielder, but do not count on the Marlins filling that need for them.

The Miami Marlins are struggling to start the regular season, and whenever a Marlins team struggles, the vultures start circling around the roster. With the roster already in tatters thanks to the fire sale trade in November, the only diamond in the rough remaining is star outfielder Giancarlo Stanton, and now a new team has emerged as a trade suitor for his services.

Andy Martino of the New York Daily News says that the New York Mets are "monitoring Giancarlo Stanton" to see if he becomes available.

Although they do not know if the Marlins will move him (Miami declined to shop Stanton even after the outfielder Tweeted about being "pissed off" after the Reyes trade), the Mets continue to monitor the situation, fully realizing that any deal would almost certainly have to include [top pitching prospect Zack Wheeler] and top catching prospect Travis d’Arnaud.

The Mets are sporting one of the league's worst outfields, so naturally the team would want to improve on their paltry offering there. But going after Stanton, as Martino noted, would cost a pretty penny. Any package would at least include top Mets prospects Zack Wheeler and Travis d'Arnaud in the trade, and likely would have to involve more pieces to make it enticing for the Marlins.

Giancarlo Stanton and Marlins trades of the past 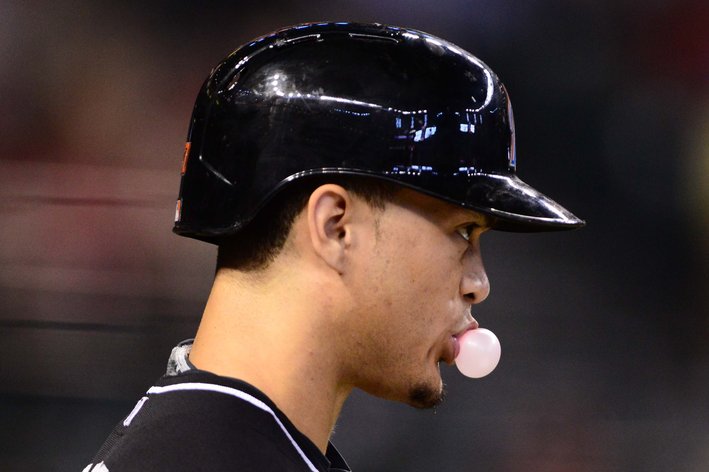 The Miami Marlins need only look to the franchise's defining Miguel Cabrera trade as the reason why the team does not need to rush into a Giancarlo Stanton trade this early.

Zack Wheeler entered the 2013 season as an elite prospect, as most sites rank him among or around the top ten prospects in baseball. Baseball America has him ranked 11th, while MLB.com ranks him eighth. SB Nation's own John Sickels of Minor League Ball ranked him 15th in his top 150 prospects, behind fellow prospect d'Arnaud. d'Arnaud is ranked around the teens, with MLB.com putting him as high as sixth.

We have all discussed Giancarlo Stanton's trade rumors before here on Fish Stripes, so it bears repeating once again. Stanton is essentially untradable this season because he holds so much trade value with four seasons of team control remaining. The Marlins would have to receive an extraordinary haul to trade him with this much time left available. The Mets, like the Pittsburgh Pirates, Seattle Mariners, and Texas Rangers, would have to give up the typically-named elite prospects and another top-shelf prospect within the top 20 or 30 in baseball or a good, cost-controlled player whom the Marlins can use for several seasons. It would take at least three major assets to pry Stanton from the Marlins' hands right now.

Do the Mets have another major asset aside from Wheeler and d'Arnaud, whom the Marlins would certainly covet and value well in any trade? The Mets also have former Toronto Blue Jays prospect Noah Syndergaard, whom Sickels ranked 23rd in baseball this season among prospects. That might be a solid three-player start to a trade, but it would still require additional, smaller pieces to complete a deal. The Mets have few major league players who are young enough to be future pieces, are cost-controlled, and are not highly protected. Of the players on the team's major league roster, only Ike Davis comes to mind as a player with value whom the Mets might consider trading.

The Mets certainly have some of the pieces whom the Marlins would want, and the starting package of Wheeler and d'Arnaud is a difficult one to match around the league. But if the Mets are unwilling to offer more value, the Marlins could easily get a deal centered around those two players for Stanton next season, so why pull off a move now? The team needs Stanton to save what little face they can for the organization in 2013, so any rumors of a trade should at least wait until after this season ends. Even after the season, Stanton still holds enough value that the Marlins could afford to wait one more year before pulling the trigger on a blockbuster prospect deal, so the status quo should remain.

Don't get excited about Stanton, Mets fans. He will still be a Marlin in 2013.