The Miami Marlins suffered the worst loss of their difficult young season against the Atlanta Braves. Alex Sanabia was cruising until the fifth inning until he imploded and allowed two home runs, and the Marlins' offense was once again shut out.

Attendance: 18,810
Hero of the Game: No one, and no one gets credit for this blowout loss
Goat of the Game: Alex Sanabia (-0.256 WPA)
Play of the Game: Evan Gattis homered in the fifth inning. Andrelton Simmons and Jason Heyward scored (-0.254 WPA)

For the first four innings of this game, the Miami Marlins and Atlanta Braves looked locked into yet another pitcher's duel, as they have been all throughout the series. Sanabia looked good in striking out three hitters through four innings and walking just one batter, especially after his win over the New York Mets involved only one strikeout and three walks in five innings. 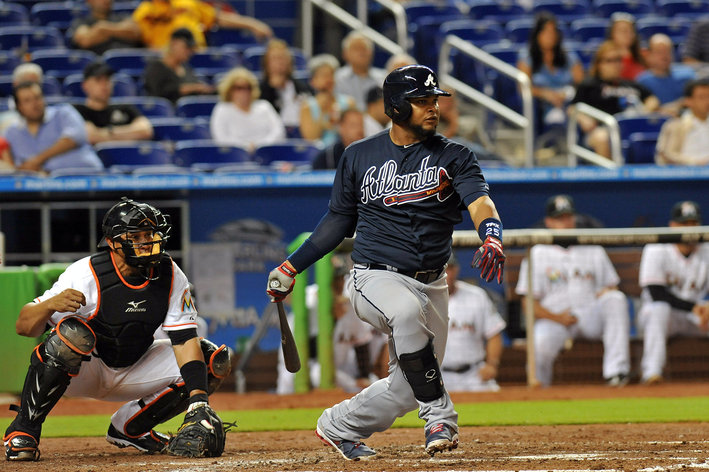 The Braves shut out the Marlins tonight for their sixth win in a row behind monster home runs from Juan Francisco and Evan Gattis, as well as stellar pitching from Mike Minor.

Everything about Sanabia's performance looked promising until he reached the fifth inning. A single and stolen base by Jordan Schafer followed by a single by Andrelton Simmons drove in the first run of the game, but the Marlins did at least look like they could stick around and compete if Sanabia continued his decent pitching. He then followed that up with a walk and, with two outs on the board, he gave up a three-run homer to rookie catcher Evan Gattis that once again put the game out of reach. After another walk, Juan Francisco added a two-run home run and it was all she wrote for Sanabia and the Marlins at that point.

The offense was its typical terrible in tonight's game. The positive is that the Fish at least picked up seven hits on the evening, including one by Giancarlo Stanton and two by a decent-hitting Placido Polanco. Unfortunately, the Fish managed just one extra-base hit and walked only twice, not mustering close to enough baserunners or timely hitting to overcome the deficit against Mike Minor and the Atlanta Braves.

The Marlins have the day off tomorrow before starting a three-game series versus the Philadelphia Phillies on Friday night in Miami.