Why is Jose Fernandez's promotion a good thing for the Miami Marlins?

The Miami Marlins promoted top pitching prospect Jose Fernandez to the major league roster, and they plan on keeping him around the entire year. In a two-part series exploring both sides, we ask why this move is a good thing for the Marlins.

Share All sharing options for: Why is Jose Fernandez's promotion a good thing for the Miami Marlins?

The Miami Marlins said they would not bring up top pitching prospect Jose Fernandez at the start of the year, yet the team just promoted Fernandez to the Opening Day roster, and it sounds as though there are no plans currently to return him to his expected Double-A Jacksonville home. This is a surprising move for a team that had previously been saying all the right things regarding keeping their young, talented prospects down in the minors instead of bringing them up for a losing season in 2013.

Still, with the move done and the likelihood of Fernandez sticking in the majors now fairly high, what are the odds that this move turns out well for the Marlins? What good can come out of the promotion of Jose Fernandez to the major league rotation?

Fans of the Marlins likely have heard a lot about Jose Fernandez, at least as of late. He earned himself a top spot among the elite prospects in baseball by putting up a stellar 2012 season, The 1.75 ERA season he had in Low-A Greensboro and High-A Jupiter combined vaulted him into the stratosphere of best pitching prospects in the game, and only the strong season Baltimore Orioles prospect Dylan Bundy had in High-A (combined with the fact that he has actually pitched in Double-A) held Fernandez from taking the best pitching prospect spot.

Fernandez then followed that performance up by officially landing near the top of everyone's prospect lists. SB Nation Minor League Ball's John Sickels ranked Fernandez eighth. Baseball Prospectus's Jason parks ranked him sixth. MLB.com's Jonathan Mayo ranked him seventh. Baseball America ranked him fifth. The consensus is that Fernandez is around the sixth-best prospect in baseball, behind guys who are either ready for the majors at a young age (Jurickson Profar, Oscar Taveras) or have extreme ceilings (Bundy, Gerrit Cole).

With all of this buzz heading into spring training, attentive Marlins fans had to be excited to see the kid in action for the first time in spring training. All he did was pitch one lone outing of two innings in spring, but that was more than enough to get the chatter going about having him be on the Opening Day roster given his immense talent. He did put up a nice two-inning outing, striking out two batters and looking the part of a hard-throwing ace.

Now that excitement regarding the potential of Fernandez can translate for a full regular season, as fans can tune in to watch him perform against the toughest competition in the majors. Admittedly, this is indeed quite an exciting situation. Despite my proposition to boycott the Marlins, even I am intrigued enough by Fernandez's talent to purchase a ticket for his first home start of the season, just to watch him play for the first time. While I may be part of a minority who could be moved to buy a ticket for just one prospect, that sort of excitement is something the Marlins could use right now to drum up support. This team, having been buried in the negative publicity of the fire sale debacle of November 2011, could use something to get the fans excited, and Fernandez could be that ticket. Even if it will not make a significant dent in ticket sales, just having the discussion be about the team and Fernandez is a great start to getting fans interested in purchasing from the Marlins again. 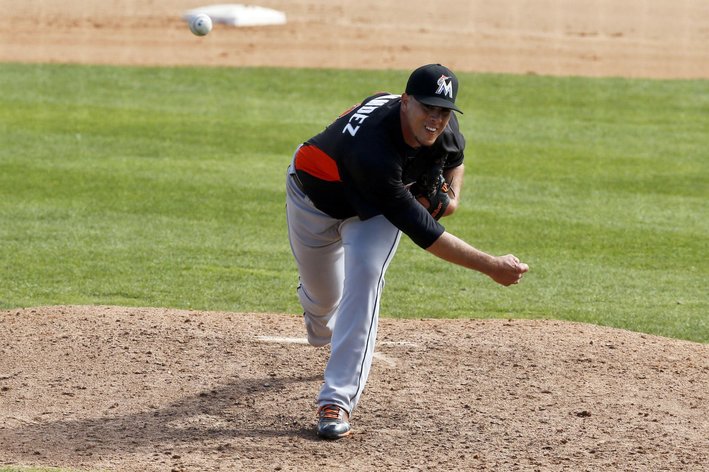 Moving him up this quickly is certainly a risk, but everything we know about Fernandez indicates that he is unusually confident and mature for a pitcher his age. - John Sickels

Developing Versus the Best

The Marlins definitely want Fernandez to be at his best by the time the team is competing for a playoff spot. If the Fish truly believe Fernandez is ready for the major leagues, his development would best be served by having him face big-league batters. The important thing for Fernandez right now is to be challenged by hitters and forced to make adjustments to his game. Baseball Prospectus's Jason Parks said in his Marlins prospects review that Fernandez has gotten away thus far with just raw, elite stuff.

Fernandez is ready for Double-A, but his raw stuff is so good he might not face a real challenge until he reaches the majors.

Not that Fernandez needs to fail in order to take a step forward, but the fastball/breaking ball combo is so electric that he can disguise mistakes and avoid exploitation, so putting himself in situations and sequences in which he is unfamiliar will be extremely beneficial.

This means that Fernandez development might be slower if he is not forced to adjust his pitching arsenal to face superior hitters. Those superior hitters just may not be available in the minors, even in Double-A. The Marlins may simply feel that the competition of the majors would allow Fernandez to grow faster than if he were allowed to rely on his signature stuff in the minor leagues.

Allowing young players to develop is best done in a year that is not going to be highly scrutinized, and if Fernandez is indeed ready for the big leagues, what better year to do it than now, when he can face that competition he needs to expand his horizons while at the same time not being pressured to perform at a strong level.

The Marlins have had many young pitchers in their past, and some of those young pitchers have made it up to the majors fairly early in their careers. One very good reason for bringing up those who are ready now is to avoid the inevitable attrition that hits the majority of pitchers, good or bad. There is evidence that pitchers only decline from their early seasons, or that at most pitchers peak at age 27. If the former is more correct than the latter, then every pitcher is working on borrowed time, and if a player like Fernandez is deemed ready by the Marlins organization, then their best bet is to extract as many years of value as possible from him.

There is a high level of uncertainty of the future of Fernandez's career. He could be a long-living career ace, become mediocre by age 28, or flame out entirely. If he is ready for the majors, the Marlins should try and get as many good seasons out of him while they still can, especially since the team has an additional, specific limit thanks to their financial concerns. Essentially, the Fish are betting that Fernandez's age-20 campaign is going to be more valuable to them than his age-27 season at the tail end of his team control.

Bringing up Jose Fernandez is a major risk, but there are some benefits that can be seen. The amount of hype that comes with Fernandez's promotion should help the Marlins drum up some interest among local fans excited to see a big prospect name. The team's interest in developing Fernandez may be best served having him face elite competition and forcing him to make the proper adjustments to propel his game forward. The Marlins may very well just feel that Fernandez is at his best either now or soon and do not want to lose any of those seasons. Whatever the reason, he may be here to stay in 2013, and that may not be a bad thing.

Of course, as we will note later today, there are reasons why this may be a very bad thing for the Fish as well.