The Miami Marlins may not have a lot of exciting names beyond Giancarlo Stanton, but if you are a fantasy baseball fan, you still need to be familiar with the team in south Florida. Who should you look out for in 2013?

The Miami Marlins do not have many household naems beyond Giancarlo Stanton. As a non-Marlins fan, you may not be aware of any non-Stanton names on the team. But as a fantasy baseball player, you are almost certainly going to do some research on a few other players that the team has. Fantasy baseball is all about your research, and the deeper your league is, the more relevant even the meekest starting players on the Fish end up being. Beyond Giancarlo Stanton, what can fantasy baseball players look for in the 2013 Marlins?

The Marlins' offense projects to be one of the worst in baseball, with the lone highlight once again being Stanton. That has an obvious fantasy impact, as it prevents fantasy players from drafting most starting Marlins outside of NL-only leagues. With the team unlikely to score too many runs this season, every Marlins player will suffer in the RBI and run department. Marlins Park will also do its job to suppress home runs for everyone not named Stanton, leaving some players with depressed value. Players like Adeiny Hechavarria, Donovan Solano, and Placido Polanco have no role on the fantasy side of things, and guys like Logan Morrison or Rob Brantly may simply not get enough playing time to warrant even an NL-only look.

But there are still three position players of interest on the team. Stanton remains an extremely valuable selection for obvious reasons, but two other names should get some attention on draft day. Justin Rugggiano is coming off of a spectacular campaign in his age-30 season, and the Marlins are hoping he can repeat a good amount of what happened last year. Juan Pierre, on the other hand, is not going to "break out" so much as he is expected to put up his usual Juan Pierre-ish line. The Marlins are likely to run often, and for Pierre, that may mean another 30- to 40-steal campaign.

The Marlins' starters may be even more fantasy blanks than the position players discussed above. The Fish have two pitchers who are expected to stick around for most of the season, and one of them is the always enigmatic Ricky Nolasco. Henderson Alvarez is the other, and he is almost entirely excluded from fantasy contention thanks to his terrible strikeout rates. The other three starters may not receive enough innings or strikeouts to really merit attention.

As for the bullpen, Steve Cishek is the undisputed closer on the roster, so he automatically has saves value. The rest of the pen may include some interesting names to rack up strikeouts for your NL-only league; perhaps keep an eye on Jose Ceda and A.J. Ramos to see how their strikeout rates are going, and if you are in need of a boost and have innings to spare, pick them up in your NL-only league. Otherwise, you can safely ignore the rest of the bullpen, as Cishek has a stranglehold on the job at the moment. 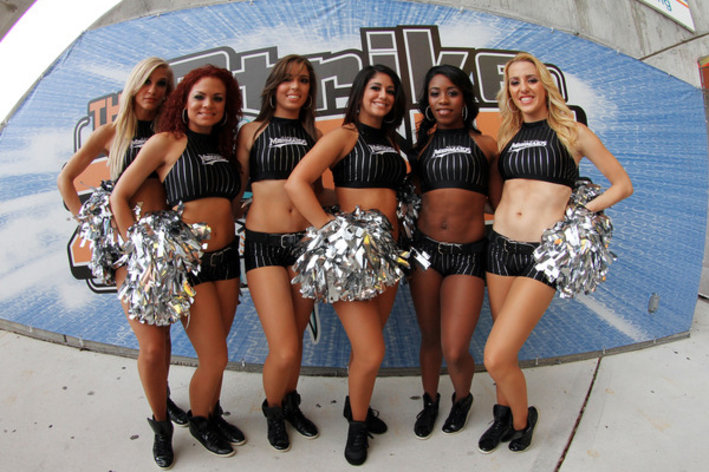 GIancarlo Stanton: Stanton should be a very early selection for most mixed leagues, even if players consider his batting average will fall thanks to regression on batting average on balls in play (BABIP). Most systems are projecting Stanton to lead the league in home runs, and drafting the league leader in long balls is usually a strong way to win that category in traditional 5x5 leagues. Most systems are expecting him to hit between .270 and .280 on the year as well, which would give fantasy players great value if it is tied to 40 home runs. At this point, the only concern holding him back from a 40-homer, 90- or 100-RBI season is his health, and so far there has only been good news on that front.

Justin Ruggiano: Ruggiano is not going to bat .313 next season, especially not with a 26.3 percent strikeout rate. But can he hit 15 to 20 home runs? Absolutely, as he is one of the few players on the team that appear to have enough power for Marlins Park. Eventually, he should find himself batting behind Stanton as well, and that should naturally help him in the RBI category. If he can muster a .260 batting average, he can give a team 15 home runs, 15 steals, and average RBI numbers, which is more than enough for an NL-only outfielder.

Juan Pierre: Pierre is always a valuable name thanks to his two-category usage. Last season, he hit .307, and this year he is projected to hit around .280. If he lucks into a few more hits, a .290 or .300 batting average would push him up to solid mixed league value, assuming he can also provide 30 to 40 steals in his designated playing time. Unless Christian Yelich dominates in the minors, there is no reason to suspect Pierre will lose significant playing time this year, so he should be a safe choice for steals.

Steve Cishek: Cishek may be the closer on a bad team, but that does not mean you should ignore him. He is a legitimate reliever with a good strikeout rate; of players with at least 15 saves last season, he ranked right alongside guys like the Blue Jays' Casey Janssen, the Twins's Glen Perkins, and the Pirates's Joel Hanrahan. That is not bad company, and if Cishek can provide similar strikeout rates alongside 30 saves, he should provide great mixed league value. Even if the saves drop into the 20's, Cishek should still be drafted in most leagues.