The Miami Marlins will head into the 2013 season with Steve Cishek as their full-time closer. Is "C-Shock" talented enough to hold onto the spot, and will he make any improvements in 2013?

The Miami Marlins' rotation has already been covered in our ongoing season preview series, and the results have not been pretty for the most part. With most of the rotation either young or questionably effective, the Marlins are likely to be turning to the bullpen fairly often in 2013. But the team was smart enough not to invest in the bullpen after last year's debacle with free agent signing Heath Bell. The Fish only signed Jon Rauch to a one-year deal this offseason and will mostly be depending on homegrown talent and players who are already on the team.

One of those homegrown talents is Steve Cishek, who has shown a lot of promise in his first two seasons in the league. In Cishek, the Marlins have an ideal style of pitcher, but one who has had certain problems in the past. Can he overcome his issues and become a true ninth-inning stopper in the league?

Cishek was one of the few bright spots on the Marlins last season. He pitched admirably for most of the season, and when Heath Bell had finally become too much to bear in the closer position, Cishek was pushed into the limelight to close games for the Marlins. Since he first inherited the closer position on June 14, he posted a respectable 3.42 ERA with a better set of peripheral statistics to back them up. He put up a 1.91 FIP during that time period, having racked up almost half of his strikeouts during those 26 1/3 innings. He struck out 32 batters, walked just 11, and did not allow a home run as the team's official closer, and thus he did not relinquish the role once he grabbed hold of it.

At first glance, you can see why Cishek could be a successful closer. He has an obviously strong fastball, a 92 to 93 mph offering that shows elite sink. That is reflected in his stats, as he has a superb ground ball rate (54.2 percent career) for a pitcher who flashes his strong strikeout rates in the pen. The strikeout rate that climbed from 2011 to 2012 can also be contributed to his excellent slider as well. The slider has been his most valuable pitch in terms of pure runs, and that is likely because it has an excellent rate of inducing whiffs (32 percent of swings taken, according to Pitch F/X data) and can be placed in the strike zone effectively (2.0 balls to called strike ratio). When you can place a pitch in the zone and have batters swing through it often, you are going to achieve success. 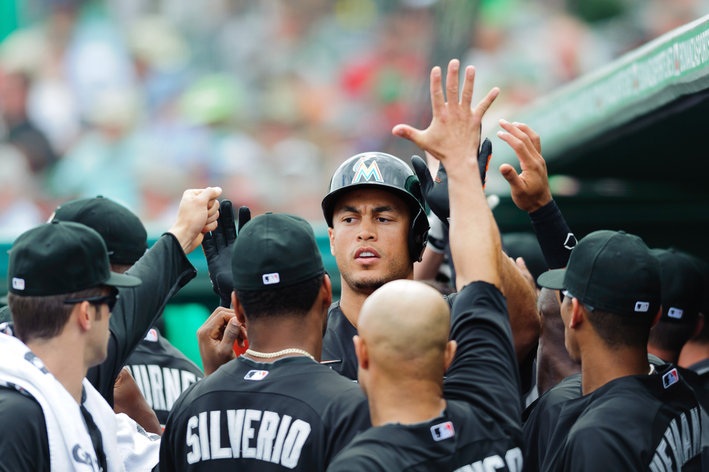 How good (or bad) will the Marlins be in 2013, according to Beyond the Box Score?

Of course, this is easily the case against right-handers, who can be fooled by a righty's sinker / slider combination, but Cishek's goal of being a late-inning stopper will involve him facing lefties, and he has struggled against them. His three-quarters delivery and arsenal lends itself to dominating same-handed hitters, and that is evident by his career 2.73 FIP and .241 wOBA against versus righties. But against left-handers, Cishek has allowed a .310 wOBA and a 3.03 FIP. The primary struggles against southpaws have come in control, as he has walked 11.7 percent of lefties faced in his career. He actually manages to strike them out more as well, but while the slider and his neophyte changeup have been effective at making them miss, the sinker has not been able to get them to hit it on the ground. Lefties have a ground ball rate of just 41.7 percent versus Cishek, and that compares poorly to his 62.7 percent rate versus righties.

How is Cishek planning on solving this problem? In Fish Stripes's exclusive interview with Cishek before the World Baseball Classic, the closer insisted that he was working on his changeup and trying to mix it in versus lefties more often rather than relying on his fastball. For him to do that, however, he will need to garner more control of the pitch, because his 5.3 balls to called strike ratio on the pitch for his career does not bode well.

Cishek is seen, as of right now, as just a "good" reliever rather than one who is closing in on elite status like his ERA in the past two seasons would suggest. The systems primarily are concerned with his home run rates; even with a 54-plus percent ground ball rate, he has still allowed homers at a lower than expected rate (4.2 percent career home run per fly ball rate). Regression in that category is expected to knock Cishek's numbers down a peg, especially if he continues to struggle to control his pitches, particularly versus lefties. Overall, the systems are expecting an ERA of 3.40 in 2013.

As he has in the past few seasons, Cishek is expected to just break the one-win barrier. Once again, it shows how difficult it is for relievers to put up good value, as Cishek is probably the Marlins' best in the pen, and even with the added leverage that comes with pitching the ninth inning, we can still expect him to be as good as some of the Marlins' weaker starting position players.