The Miami Marlins appear close to signing Garrett Jones to a two-year contract to replace Logan Morrison. The problem is that Jones is essentially an older version of Morrison.

Share All sharing options for: Garrett Jones signing: Miami replaces one flawed first baseman with another

The Miami Marlins are closing in on signing Garrett Jones to a two-year contract worth $7.5 million. Juan C. Rodriguez of the Sun-Sentinel shows the breakdown of the deal.

When Marlins fans first heard abut this deal, their first thought was probably that Logan Morrison is on his way out, and sure enough, it seems as though Miami will "likely" trade Morrison now that Jones is in the fold. Their second thought was probably along the lines of "why Garrett Jones?"

And that is a good question, Marlins fans, because Garrett Jones is neither an improvement nor much of a great options at first base for Miami when compared to Morrison.

The Marlins probably saw in Jones a power bat that could help the team's paltry home run total. Miami hit fewer than 100 homers as a team last season, and while some of that was the home-run suppression by Marlins Park, a lot of that was a distinct lack of talent. Garrett Jones comes to Miami with a reputation for nice power, as he has hit 24 home runs per 600 plate appearances for his career. Jones's career home run per fly ball (HR/FB) rate of 14 percent is better than all but two players with at least 400 plate appearances on the Marlins from 2011 to 2013. 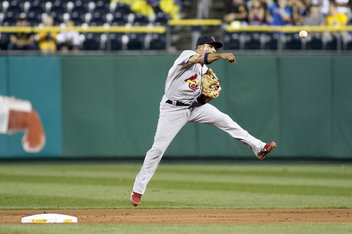 The Marlins bought time for Derek Dietrich with a stopgap in Rafael Furcal, but was he better than the other in-house options?

That Jones can hit it out of the park is not in question, especially since he comes from a stadium that also suppresses homers. While only AT&T Park works on lefties as ruthlessly as Marlins Park, PNC Park is no cakewalk for lefty power swings. The park factor for PNC Park is at 93 for lefty home runs, meaning it suppresses homers about seven percent compared to the average stadium. Miami's park factor at this time is at 86, which means that it should suppress about seven more percent off of Jones's total. From his pace of 24 homers per 600 plate appearances, we could expect a drop down to 22 home runs in that same time span. A loss of two home runs a season does not seem too terrible, though that is approximately three runs knocked off per year.

The problem is that, despite the added power, Jones is not any better than Morrison, at least when it comes to the 2014 season. Take a look at their career numbers and their projections for next season.

In bold are the projections for next season. As you can see, the Marlins should expect to get about the same performance offensively from Jones and Morrison. Jones has more power, as he is projected to hit 21 homers in 553 plate appearances (19 if adjusted according to FanGraphs' park factors for Miami) versus Morrison's 15 or 16 in the same number of plate appearances.

But that difference in power production is made up for by Morrison's ability to get on base. There is a 30 point difference between Jones's and Morrison's OBPs, and that number is significant. In 553 plate appearances, the difference between those times on base is 16 times. Assuming many of those are walks (Jones's projected walk rate is around eight percent versus Morrisons' 11.4 percent), that is a difference of almost five runs. Compare that to the home run disparity, which in Miami would probably be equivalent to almost six runs.

Essentially. those two differences even out, and Morrison and Jones are pretty much expected to produce similar results offensively.

Essentially. those two differences even out, and Morrison and Jones are pretty much expected to produce similar results offensively. Even if Jones is a better defender, the win difference is not drastic. Morrison should get some playing time docked off for being oft-injured, but even if Jones is a half-win better than Morrison, there is still a question as to why Miami opted for the older Jones (33 years old in the 2014 season) over the 26-year-old Morrison.

Jones has an additional concern that is even more evident in his game than it is in Morrison's. For his career, Jones has a massive platoon split.

That is a larger split than we discussed with Jarrod Saltalamacchia when he signed earlier this week. Against righties for his career, he has hit like Ryan Zimmerman or Shane Victorino did last season, complete with passable batting averages and OBP. Against lefties, he hit like Jeff Mathis has hit for his career. The Marlins may already be suiting up Mathis against left-handed pitching next season with Saltalamacchia's troubling splits. The team probably should not add Jones's struggles to the problem.

I have Jones projected to hit a .287 wOBA against left-handers next season, which is essentially what Ed Lucas did against all pitchers last year. In comparison, Logan Morrison has a more even career split and is projected to hit a .314 wOBA versus lefties next year. Jones is probably not as bad as Saltalamacchia against lefties simply because he is a better hitter, but he is poor enough that he probably should have a platoon partner. But Miami does not have great in-house platoon options and probably should not pay more salary for another bench player to take on the role. The Fish already have Greg Dobbs as the team's bat-only bench presence, Miami probably cannot afford another bench spot to a first base-type who cannot move around the infield or outfield.

The Marlins may already be suiting up Mathis against left-handed pitching next season with Saltalamacchia's troubling splits. The team probably should not add Jones's struggles to the problem.

Jones does hold some flexibility of his own in the sense that he can play an acceptable, if below average outfield for Miami in a pinch. Given the Fish's injury problems for Giancarlo Stanton, it may come up for the team to have to move Jones out to right field, an area where he was mediocre for most of his Major League career.

The problem with that notion is that Miami already has significant outfield depth in prospects Christian Yelich, Marcell Ozuna, and Jake Marisnick along with Justin Ruggiano, who is currently slated to play a fourth outfield role. If a Stanton injury occurs, it is much more likely that Miami fits in Ruggiano at the position rather than turning to the less defensively-capable Jones.

As mentioned above, Jones is likely to be a decent platoon player or a quality bench bat, but he is obviously stretched as a full-time starter. Depending on which projection you like out of the two currently available ones on FanGraphs, he is either a lower-tier borderline starter or a useless piece. If you take the middle ground, you probably can talk yourself into seeing Jones as a one-win player in 2014.

The ultimate judge of this trade may be what Miami gets in return for Morrison in a trade, because the signing to replace the younger first baseman seems completely puzzling and useless right now.

The problem is that Miami's contract signs him through 2015, and the 2015 dollar value is at $5 million. Even if he remains a one-win player for a full season, Jones is probably worth the contract. However, that just tells you that Jones was an extremely low-paid piece, earning an average salary akin to that of Rafael Furcal. When you pay that little, you expect bench production, and that is what Miami is getting at a full-time level. Of course, Miami is cash-strapped and probably could have used that money a little more wisely. In addition, the second year seemed completely pointless for a player who was just recently designated for assignment and non-tendered. In comparison, J,P. Arencibia is receiving a $1.8 million, one-year deal while playing a more defensively-important position.

Like the Furcal signing yesterday, Miami's deal with Jones is low-risk and low-reward. Unfortunately, the contract's second year ups the risk more than the reward given Jones's age, and the production is can barely be discerned from Miami's in-house option. The ultimate judge of this trade may be what Miami gets in return for Morrison in a trade, because the signing to replace the younger first baseman seems completely puzzling and useless right now.