As we head into the new year, the Miami Marlins have a series of key questions for 2014, as highlighted by Joe Frisaro of MLB.com. Fish Stripes will tackle each one, starting with the question of Giancarlo Stanton's bounce back.

Share All sharing options for: Marlins 2014 Key Questions: Will Giancarlo Stanton bounce back?

No, the Miami Marlins are not going to be a massive success in 2014. There are many problems that are still on the club, but the Fish are at least in line to improve from last year's dismal 62-100 record. But the club also still has a shot at matching last year's terrible mark if they do not see some improvement and answer a number of key questions for 2014. Joe Frisaro of MLB.com is previewing the 2014 season and has a list of nine questions for the Marlins to answer as we head into the new year.

Here at Fish Stripes, we make it a habit to answer questions that Joe answers, so we can get another look from a perspective separated from direct team access. And the first topic today is going to be Giancarlo Stanton and his potential bounce back season in 2014.

Here is what Frisaro had to say.

1. Will Stanton bounce back? Some new faces have been brought in, but the club maintains Stanton is the face of the franchise. Will he live up to the billing after a subpar 2013? Like the rest of the club, Stanton had a rough year. The slugger missed more than a month due to injuries, and he never got into a consistent groove. This is a big season for the 24-year-old, who saw a decline in his power numbers. The offseason moves should give Stanton more protection. It's also up to him to make the adjustments to become the threat everyone expects. If Stanton becomes a force in the middle of the order, chances are the Marlins will enjoy a bounceback season. If not, and the team flounders, look for the trade rumors to surface around the All-Star break.

This tells you that Miami is highly unlikely to extend Stanton at this point. Stranger things have happened; Josh Johnson signed his four-year extension with Miami on January 14, and the Marlins still have until around that time to offer Stanton an extension before arbitration figures are exchanged. But given the quiet surrounding that front, it is very likely that such a deal will not materialize.

That makes the 2014 season a big one for Stanton for both sides. For him, he is looking to re-establish value after a mediocre 2013 season that saw him hobble around in the outfield and lose power at the plate. Miami wants him better to see if they need to invest further in him if possible or, if they need to trade him, if he can retain enough trade value for the Fish to get a good return.

But the question of Stanton's bounce back is more complicated than what Frisaro mentions. Part of it may indeed be mental, and perhaps having better hitters on board will help Stanton play better at the plate. Of course, any improvement Stanton undergoes may be inseparable from simple regression from the mean. Stanton had the worst season of his four-year career, but he also did perform enough adjustments to adapt his game to the approach pitchers took. After seeing a career-low 41 percent of pitches in the zone, Stanton started swinging less. Take a look at this swing rate chart from 2012: 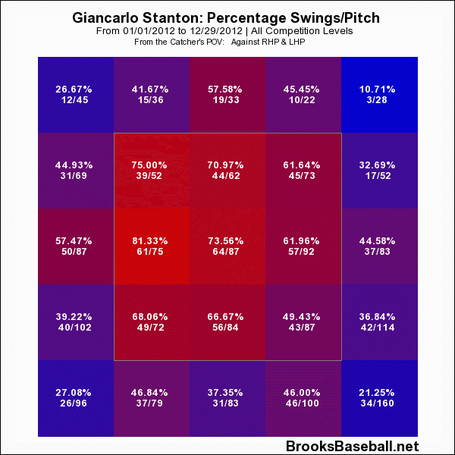 And compare that to the chart from 2013: 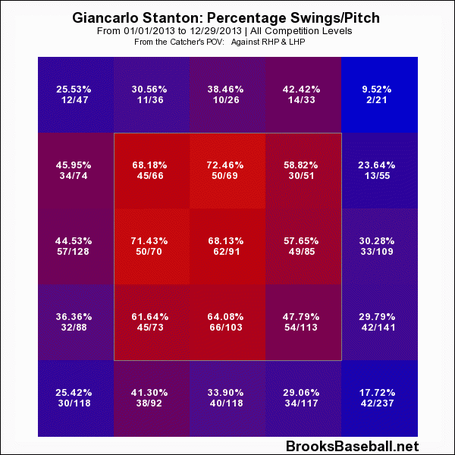 The right side of those charts represents the outside corner of the plate for the righty Stanton (perspective is from the catcher's view). From the outer half of the strike zone out across to out off of the plate, Stanton's swing rates have dropped, indicating that he is taking the walks that pitchers are giving him. This is exactly what he needs to do if he is to be attacked in this fashion, and the fact that he drew walks in 14 percent of plate appearances shows that he accomplished his goals.

The problem is that he also stopped swinging at pitches in the zone. His rates have fallen on pitches up the middle, and the Marlins are trying to emphasize trying to hit that up-the-middle fastball when he is presented the rare opportunity.

So a focus with Stanton will be to not miss pitches to hit. Surrounded by some proven veterans, the Marlins are hopeful their right fielder can go back to being his old self.

This all makes sense. The other thing Miami wants to do is get Stanton to see more strikes with lineup protection. While improving the hitters following Stanton will absolutely get him more strikes to see, the research shows that lineup protection does not change the average hitter. There is a very good chance that the gains Stanton gets in frequency of hits (and outs in play) should even out with the loss of walks and strikeouts from being pitched around less. More on the lineup protection question tomorrow.

Stanton needs a resurgence in power to really capitalize on his value, but there is evidence that says that his power has not really disappeared. Mike Podehorzer of RotoGraphs says that Stanton hit about the same average distance on fly balls last year as he did the year before, when he belted 37 home runs in 501 plate apperances. This is true; Stanton's fly balls averaged 299 feet in 2012, but they averaged 302 feet in 2013. A larger percentage of fly balls and home runs went between 280 and 460 feet in 2013 (63 percent) than they did in 2012 (55 percent). Based off of BIS classifications provided at FanGraphs, Stanton hit about as well on fly balls in 2013 (.587 wOBA) as he did in 2012 (.572 wOBA).

The simple matter was that Stanton hit fly balls a little less frequently last season than he did in 2012, and that combined with odder distribution made his home run count dip. But in terms of average distance and results, it seems as though his work in that department was very similar. This pushes the likelihood of a comeback even more towards the positive. Overall, the signs all point to a better season ahead for Stanton, so Fish Stripes believes a bounce back to at least his career numbers is in line.