Friday night's game against the first place Washington Nationals had a little bit of everything for Miami Marlins fans. Jacob Turner had the difficult challenge of out-pitching Stephen Strasburg. He more than delivered. Later, the Marlins' bullpen imploded, allowing the Nationals to tie the game and take it into extra innings. Thankfully, Jose Reyes was there to save the day. 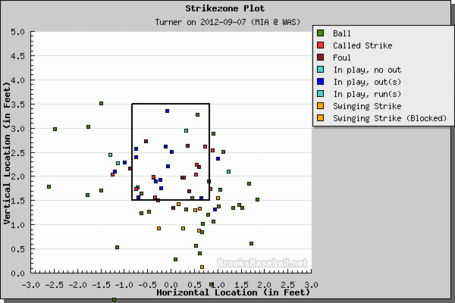 Turner stumbled out of the gate, allowing a home run to Ryan Zimmerman in the first inning. He quickly recovered, pitching five more scoreless innings. Turner kept his pitches down in the strikezone and used his curveball to great effect, generating five whiffs with the pitch. Turner ran into trouble again in the sixth inning, giving up a two-out triple to Zimmerman and a walk to Adam LaRoche. He escaped the inning by inducing a fly out from Michael Morse.

Stephen Strasburg had possibly his worst start of the year, allowing five earned runs and only surviving three innings. The Marlins attacked Strasburg early and hard, beginning the game with a walk by Bryan Petersen. Jose Reyes followed with a one-out single. The runners scored on a Giancarlo Stanton double and Carlos Lee sacrifice fly.

The runs continued in the second inning with a Rob Brantly solo shot to right field. Stanton hit his 31st home run to center in the top of the third. Gregg Dobs later doubled and scored on a Donovan Solano single.

The Marlins were coasting their way to an easy victory by the seventh inning, achieving a 96.6 percent chance of winning. Reliever Carlos Zambrano failed to get a single out, allowing three consecutive base hits to the Nationals. Ryan Webb allowed another runner to score, but he and Mike Dunn were able to preserve a one-run lead and escape the inning. It wouldn't last long. Michael Morse homered off A.J. Ramos in the eight inning to tie the game.

After failing to drive in two runners in the top of the ninth, the Donnie Murphy began the tenth with a pop out to first base. Petersen got the ball rolling with a single to right field, followed by a ground ball single from Ruggiano. Jose Reyes then delivered enormously by hitting a two-run triple to left field. Carlos Lee drove in Reyes with another sacrifice fly.

Steve Chishek looked poised to blow a generous lead after allowing a double to Adam LaRoche, a single to Michael Morse, and a double to Ian Desmond. He struck out Danny Espinosa and then walked Kurt Suzuki. Somehow, Cishek struck out Bernadina and Werth to close out the game. Despite allowing four baserunners, Cishek struck out the side. The bullpen was rocky throughout the game and the ending wasn't smooth, but it did make for good drama.