Miami Marlins starter Nathan Eovaldi had his best strikeout game as a major leaguer against the Atlanta Braves last night, and he has his fastball to thank.

While the Miami Marlins did not come out successful in last night's 4-3 defeat at the hands of the Atlanta Braves, we here at Fish Stripes are all about the #minorvictories here in 2012. So one #minorvictory that could be a major victory for the Marlins going forward is Nathan Eovaldi's impressive performance in last night's game. Eovaldi struck out a career-best eight batters and only walked two. He also only gave up four hits and two runs along the way. This marks the second straight impressive outing for Eovaldi, and both have been against the Atlanta Braves.

The reason why the Braves are such an important team to consider in Eovaldi's career is that Atlanta is stacked with left-handed hitters to challenge the righty Eovaldi. The typical Braves lineup boasts five lefty or switch-hitting bats in Michael Bourn, Jason Heyward, Chipper Jones, Freddie Freeman, and Brian McCann. As we mentioned previously, one of Eovaldi's biggest problems in transitioning to the majors was dealing with left-handers because he lacks a competent third pitch.

However, in the last two starts against the Braves, Eovaldi has allowed eight hits, struck out 13 batters, and walked only four men in 14 innings. How did he do so well against such a lefty-loaded lineup? Well, in the case of last night, he did not need a third pitch, because he did everything he needed to do with his fastball.

Eovaldi's fastball last night did everything he wanted it to do.

That's right, that is 36.7 percent whiff rate on a fastball. Eovaldi's fastball was not that much different in terms of velocity as his fastball on other nights, so it is a little confusing to suddenly see so many swings and misses on that pitch. That is further compounded by the fact that Eovaldi's fastball is known as "flat" and did not appear to have any significant movement difference this time around.

Here are the locations of where he got the swings and misses on his fastball. 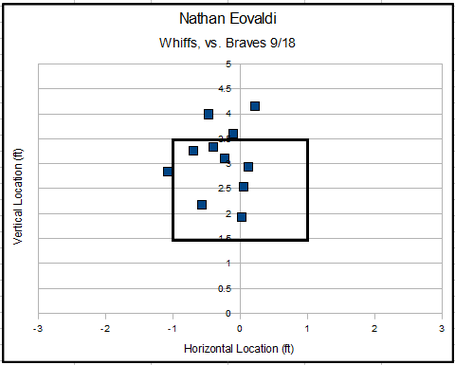 A couple of those were in some dangerous locations down the middle of the plate, meaning Eovaldi either did not have good command of the pitch in those instances or hitters were just too slow on his stuff; Eovaldi topped out at 98 mph on his fastball and was sitting around 96 mph during the first inning or two. The rest of the fastballs were high in the strike zone or above, where the majority of fastball swing and misses are generally located.

But can Eovaldi use this to his advantage? Fastballs are not the most whiff-inducing pitches in baseball, and his fastball in particular only has velocity on its side. Of course, velocity is better to have than movement, since apparently movement contributes little to fastball effectiveness, but even velocity does not add much to swinging strikes until you reach fireballing-reliever levels (96-98 mph). Eovaldi was hitting that early in the game, but in the later stages, his fastball had dipped down to as low as 90 or 92 mph. If anything, inducing this many whiffs from hitters on his fastball is not likely to stick around in the latter stages of the game.

So what can be encouraging from what seems like an anomalous start from Eovaldi last night? One thing of interest was the use of his changeup last night. Color commentator Tommy Hutton seemed impressed by the changeups Eovaldi threw last night, and with good reason. The ones at which hitters swung, they had a very difficult time making contact. Eovaldi threw all 14 of his changeups only against lefties, and those hitters swung eight times and missed four times, good for a 50 percent whiff rate.

The changeup had its downsides, as only five of the 14 pitches landed in the strikezone, and it is not as if Eovaldi was using them strictly as out pitches. Only three of the 14 changes were thrown in two-strike counts, and only three pitches were thrown in pitcher's counts. Just as we mentioned last time in late August, Eovaldi is still having difficulty placing his changeup for strikes or putting it in the strike zone, so the lack of command and control on the pitch is holding its significant whiff potential back.

In last night's start, Eovaldi's curveball was not working as well as it usually does; I noted in the previously linked article that his curveball may be his better third offering. But he needed his changeup tonight as his control of the curve was off (six balls and no called strikes in eight pitches) and he needed another weapon. The changeup did just enough to complement the fastball last night.

But as we mentioned, the fastball will not be there every night, and Eovaldi needs to change the circumstances surrounding his tertiary offerings as noted in the previously linked article. One of either his curveball or his changeup needs to be better developed in order to avoid consistent problems against lefties, because at the major league level, players will not swing through 37 percent of your fastballs unless you are averaging 97 mph. Eovaldi's fastball has the sort elite average velocity that you want in a starter, but he will still need the change or curve to handle lefties better.