If Miami Marlins Cut Payroll, 2012 Disastrous Season Is To Blame

Share All sharing options for: If Miami Marlins Cut Payroll, 2012 Disastrous Season Is To Blame

Late last week, Joe Frisaro of MLB.com speculated that the Miami Marlins were more likely to lower payroll for 2013 to around $80 million. Fish Stripes had a reaction to that, including what type of players the Marlins could pursue with that kind of money. But that was one reporter's opinion on the matter, and that number was thrown out before last season, when the Marlins went on their spending spree.

But today, Clark Spencer of the Miami Herald reiterated a similar figure in his column.

After going "all in" this season with a franchise-record $95 million roster payroll, the Miami Marlins will likely scale back in 2013 to a more moderate figure, somewhere in the $70 million to $80 million range, sources said.

Multiple sources said the team lost money this season due largely to a high payroll and lower-than-anticipated attendance at the new ballpark. As a result, the Marlins will not be repeating last year’s buying binge, when they spent more than $190 million on free agents.

One reporter, even the official beat writer for the Miami Marlins, may just be noise, but two? Spencer refers to the fact that the Marlins have lost money this year due to slowly dwindling attendance marks combined with the payroll as the reason the Marlins may choose to reset their payroll. The problem is that the primary reason the Marlins lost in attendance as the year went by is that they began to perform poorly on the field. The Marlins did not help matters by trading away a number of players who would have added wins in 2012, thus further burying the 2012 team and lowering attendance marks again.

If the Marlins do plan on lowering payroll, then the disastrous 2012 season can be blamed for it. But unless the team is willing to add payroll, the club will not be able to produce the wins necessary to keep a fair-weather fan base coming to ball games.

It is plainly obvious that the Miami Marlins, as of right now, are not a competitive team. Even with the addition of Emilio Bonifacio and Logan Morrison back into the lineup, the club as synthesized is not likely close to a playoff contender. And this is not a quick fix situation, as the Marlins gave away a number of 2013 wins in trades this month. By trading Hanley Ramirez and Omar Infante, the team traded out four to five wins from next season's team, and in return the club took back perhaps two wins in prospects Jacob Turner and Nathan Eovaldi (assuming Rob Brantly is not more than a win better than John Buck at this stage).

The presumption was that some of those wins would be replaced next year by free agent signings, using money essentially reallocated from Ramirez's contract to other deals. But any signing the Marlins make in 2013 that would significantly help the team would likely cost them more money than they are apparently willing to spend. The Marlins still owe $67.5 million next season in salaries, and that is before five players reach arbitration. If the Marlins are smart, they will only tender two of those players (Bonifacio and Ryan Webb) and pay them an additional $4.5 million, putting their payroll at $78.5 million before making a single move (includes 15 players making around the league minimum).

That basically handcuffs the Marlins to their current emaciated roster if the team refuses to go above $80 million in their payroll. What is the most likely result of running a 2012 redux of the roster minus Ramirez, Infante, Anibal Sanchez, Carlos Zambrano, and Carlos Lee? This Marlins team might very well be similar to what we saw in August perhaps.

It should be no surprise that the Marlins' attendance has dwindled. One look at the individual and five-game average attendance over the course of the season shows you exactly why attendance has fallen. 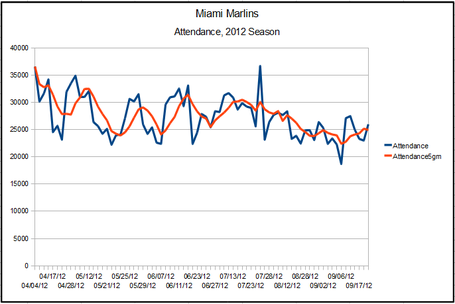 Notice the trend that the team saw all throughout the year. Attendance saw a doldrums in the middle of a month before a peak resurgence towards the end in May. It stayed high for interleague play in June, but that is when the Marlins began to struggle. Attendance still stayed near 30,000 for July, but after the Marlins made their trades, it began to fall from near the end of July all the way until now. Since July, attendance has not cracked much higher than 27,000 in any given night, and the average has been around 25,000.

Why is that the case? Miami is a fair-weather sports town that is dominated by the Miami Dolphins and Miami Hurricanes. It is also an event town, and the Marlins since July have not been a must-see event given the team's struggles. So attendance went down as the Fish began to play poorly in the last two months.

The problem is that, if the Marlins do not want to commit to rebuilding the team with some outside assistance, 2013 may be another bleak year. And if it is a struggle next year as well, you can bet that fans will once again fail to show up to the stadium as the team desired. So, as expected, attendance is really tied to performance, and for the Marlins next year, performance will be tied a good deal to how much payroll the team adds (in addition to whether the team adds it wisely).

David Samson said the Marlins have to reinvest the money saved on Hanley Ramirez wisely. But if these rumors of an $80 million payroll are correct, then the move to trade Ramirez was a cost-saving one more than anything else. If Marlins fans perceive it that way, you can be certain the rage of many Marlins fans will be reignited and the team will suffer at the gates once again. And the more they suffer, the less they will spend, and a vicious cycle that started with an unexpectedly rough 2012 season may hold down the Marlins until minor league reinforcements bring some new life into this team.