The Miami Marlins were just half an inning away from their game against the New York Mets from being another dismal affair.

After struggling to plate runners all day and generally struggling against Cy Young candidate R.A. Dickey, the Marlins were down to their last three outs. And given how the first 24 had gone, and considering that Dickey was still on the mound, these final three outs did not look like they were going to have much behind them.

Then, all of a sudden, a flicker of hope with no outs occurred.

John Buck's three-run home run, which was previously ruled a foul ball, put the Marlins back on the map. But how the Fish got there is the reason why they eventually fell 4-3 to the Mets anyway. After a great start with only one blunder, Mark Buehrle put up a clunker in this one and the Fish fell behind fast, and the early deficit against the dominant Dickey felt like an impossible mountain,

Buehrle's two major errors in the game were the home runs allowed, as he and the Marlins hung on decently throughout the game otherwise. It was the two home runs, Buehrle's 25th and 26th homers allowed this year, that really buried him early in the game. The first again came against Jason Bay, who launched a grand slam against him the last time the two met in a matchup in Miami. This time, Bay sent a shot to deep center field that landed just to the left of the big apple home run structure, allowing two runs to score. Buehrle's second home run went to Scott Hairston, who also hit one to center field and got it above the orange fence line that was an adjustment done to lower the effective fence height. Both home runs were well hit, though Hairston's just got over in Citi Field.

But it is not as if Buehrle was stellar otherwise. Unlike in his matchup against the Reds, where his one and only blunder really led to a four-run outing, this one did not end looking good. Buehrle walked two batters unintentionally while also tossing out an intentional walk during his outing. A look at his pitch chart feels eerily non-Buehrle. 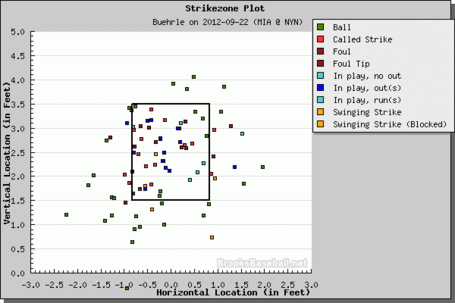 Buehrle threw 31 balls and just 16 called strikes, and while essentially a two-to-one ratio would not be unacceptable for the average pitcher, it would unacceptable for a guy who does not rack up strikeouts. Buehrle's six swings and misses resulted in a 6.9 percent swinging strike rate that was below average for him for this season.

Buehrle only lasted 87 pitches, but with good reason given how poorly his final inning was going. He allowed a walk to Lucas Duda and a double to Andres Torres that luckily bounced over the wall into foul territory rather than getting by a diving Bryan Petersen. It took a monumental play by Petersen on a long fly ball to the left field wall to even keep the Mets to four runs.

But wow, what a catch the play by Petersen was.

R.A. Dickey drove it to deep left center field, and my initial thought was that he had hit a grand slam. As Petersen slowed down in his approach, you saw that he was tracking the ball the whole way, which gave me some hope that a catch could be made. Sure enough, Petersen flew up to make a spectacular grab and rob Dickey of extra bases and the Mets of three runs. That play did not end up meaning much in the long run (it was worth 7.2 percent of a win), but it was a highlight-reel play that is sure to make the Web Gem rounds tonight.

The Marlins offense actually got some baserunners in this game for a change against Dickey, who did not dominate the Fish like he did in his last two starts against them. He struck out only four Marlins and allowed two walks and six hits, meaning the Fish had eight baserunners to work with. Sadly, the team stranded six of them, and four came in crucial situations with Jose Reyes at the plate. Twice Reyes had two baserunners aboard with two outs, and he failed to capitalize on either situation. As a result, he ended up with a -0.140 WPA mark to his name due to the unclutch play.

Even in the final out, the Marlins built an opportunity. Rob Brantly came in with a pinch-hit single and Petersen took his place on the bases following a fielder's choice. But Petersen also stole second and got himself in scoring position, only for Gorkys Hernandez to deliver the final out via strikeout. Even in their last throes, the Marlins' offense was powerless during the wrong times.