Share All sharing options for: Miami Marlins' Jose Reyes a Model of Consistency

Miami Marlins color commentator Tommy Hutton tends to use the word "consistency" when he really means "good." See, players can be consistently bad, and one only needs to look back at the recent history this team to see just what I mean by that. Chris Volstad was consistently mediocre as a pitcher, and that has only gotten worse this season with the Chicago Cubs. In 2009, Emilio Bonifacio was the most consistent out-maker on the team, and it looks like Gorkys Hernandez is following in his footsteps in 2012.

But every once in a while, Tommy's definition of "consistent" and my own converge, and in 2012 that has converged in the form of Jose Reyes. When the Marlins signed Reyes to a six-year, $104 million deal, they were not sure what they were going to get. Two years before, he had his worst full season since 2005. In his free agent year, he had his very best campaign. The Marlins could not be sure which Reyes they would get, and it did not get better when he hit just .220/.294/.341 for the month of April.

Since that time, however, Reyes has been nothing if not consistent, and in a good way, for the rest of the season. For the Marlins, that is a great sign of things to come.

Take a look at his batting lines by month.

A lot of players who have as bad a month as Reyes did at the beginning of the season will recover by having an equally hot month and settling into their averages. Reyes has gotten to where he is by simply hitting a little better than his average each and every month of the season since the horrid month of April. In May, he was still establishing his power, but by the time June and July rolled around, he had gone back to smacking triples and home runs whenever he could.

Still, it is interesting to note just how different each of the months seemed to be. In May and June, Reyes had a more patient approach that led to a 10.7 percent walk rate and a .365 on-base percentage. But in July and August, he turned up the power stroke and hit a home run in 11.5 percent of his fly balls, leading to a .505 slugging percentage. However, as disparate as his methods were in those two months, the end results were the same: Reyes posted a .290 batting average and a ,343 wOBA in May and June, and he did slightly better with a .295 batting average and a .362 wOBA. Essentially, if Reyes had hit for any power in May, he would have turned in a very similar result to his work in July and August.

In terms of his recovery from his ugly 2012 start, Reyes has been nothing but consistent in results, even if the methods have changed.

Swinging Back To Normal

As mentioned, one thing that Reyes displayed this season early in the year that he began to go away from was his swing rate. In May and June, he had swung at fewer pitches and drew a walk rate of 11.5 percent. But since the start of July, swings have picked up and Reyes has started walking a lot less, drawing a 7.0 percent walk rate since then. That is all tied to an increase in swing rate, which is one of the changes he slowly began applying after he started the season passively.

Courtesy of Baseball Heat Maps, check out his swing rates around the strike zone against right-handed pitchers from the start of the year to the end of June (note: the following maps are regressed with league average data to not look wonky). 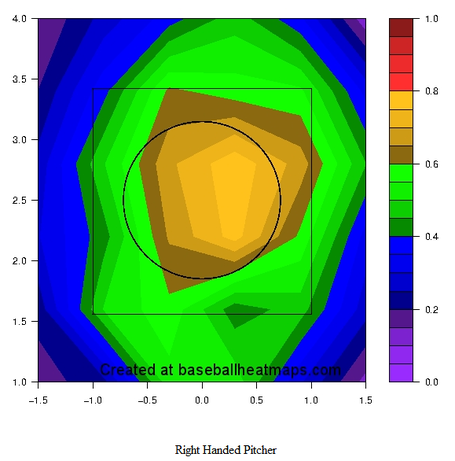 Compare that to his swing rate against righties since then. 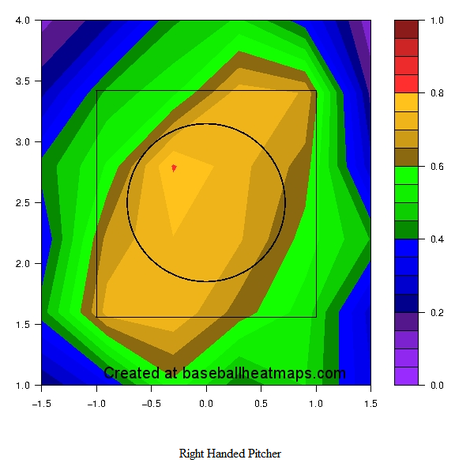 The loss in walks for Reyes directly correlates to his increased swing rate, and that certainly is not "consistent" within the season. Reyes likely made an adjustment to increase his swings having seen that his early approach was less effective.

However, you should not be surprised that the overall results are not all that different from years past. Reyes's swing and contact rates this season are almost mirror images of his marks since 2007.

Even when Reyes was not consistent in his swing approach, it was only in order to bring his seasonal numbers up to his career par. Once again, Reyes remains consistent at least on a year-to-year basis.

Season Shaping Up the Same

What is especially interesting about Reyes's season so far is how it is an excellent example of regression to the mean and why you cannot overreact to April starts. As we mentioned earlier in August, Reyes has more or less met expectations since that initial slump, showing that he has not lost any talent since the start of the season. Since the start of May, Reyes has had 569 PA and hit .299/.358/.455, good for a .354 wOBA. Check out our expectations of Reyes from before the season, in our season preview series.

Each of these projection systems generally think of Reyes the same. PECOTA seems the most pessimistic, while ZiPS appears to be the most optimistic. On average, these projections all end up right around where Reyes's three-year average wOBA of .355., which is a perfectly acceptable offensive expectation.

That is a perfect match for our preseason expectations. Essentially, Reyes stumbled out of the gates and returned to form exactly as expected. He will end the year a little worse than expected, but for almost 600 PA, the Marlins got the Reyes they thought they were going to get. For a team that has struggled to get anything that it expected out of this 2012 team, Reyes has been a relative revelation in how he has recovered from his early season slump.