The Miami Marlins lost yet another game to the Atlanta Braves on Monday night, bringing their season match-up record to 3-10. The Marlins threatened to come back in the fourth inning, scoring four runs off Tim Hudson. Ultimately, the offensive effort couldn't overcome Wade LeBlanc's poor start and the Marlins fell 5-7. 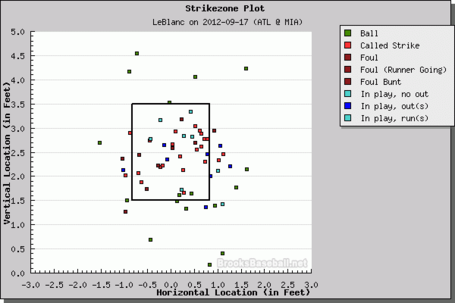 Wade LeBlanc pitched effectively to the first batter of the game, striking out Michael Bourn looking on four pitches. From that point onward, LeBlanc never looked good. He allowed three singles to Andrelton Simmons, Freddie Freeman, and Martin Prado, followed by a Dan Uggla home run to left field. When the dust had settled, the Braves were up by four runs in the first inning.

LeBlanc escaped the second and third innings unscathed, but the Braves offense returned in force in the fourth inning. He allowed another single to Prado and then proceeded to walk Uggla. Prado was caught stealing second, but David Ross singled, advancing Uggla to second base. Jeff Baker then hit a one-run single, followed by a ground out from pitcher Tim Hudson, scoring Ross.

LeBlanc's faced a number of problems in his start. His fastball averaged 86.86 miles per hour, a full mile per hour slower than his season average. His changeup, which is ordinarily his go-to swing and miss pitch, failed to generate a single whiff. In fact, he didn't get a single batter to whiff all night. Many of LeBlanc's pitches stayed up in the zone and he allowed far too many hits off balls right over the plate. LeBlanc kept the ball in the zone and only walked one batter, but he was far too hittable to be effective against the Braves' above-average offense.

It's difficult to imagine the Marlins displaying a substantial amount of offense with Giancarlo Stanton out of the lineup, but the team did just that. They scored four runs in five innings off Braves starter Tim Hudson and another run in the seventh inning. After falling behind by six runs in the top of the fourth, the Marlins mounted a comeback attempt in the bottom of the inning. Justin Ruggiano and Donovan Soloano got the ball rolling by both singling on a ground ball up the middle. Rob Brantly, who is hitting a tremendous .457/.578/.657 in September, pounced on a cutter, hitting a line drive to left field and scoring Ruggiano. Bryan Petersen later hit a triple to right field, scoring Solano and Brantly. Gorkys Hernandez joined the fun by tripling to center field, scoring Petersen. Jose Reyes couldn't scoring Hernandez, however, grounding out to shortstop Andrelton Simmons.