Why is B.J. Upton a Bad Fit For the Miami Marlins?

Share All sharing options for: Why is B.J. Upton a Bad Fit For the Miami Marlins?

The Miami Marlins' 2012 season has long since been over, and while fans can still appreciate this club as it is constituted, I am certain many are more interested in what next year's team could look like. While mid-September may be a bit too early to start the free agent rumor mill for the Marlins, that did not stop Ken Rosenthal of Fox Sports from floating the first name the Marlins' way: Tampa Bay Rays free agent center fielder B.J. Upton.

He mentions that the reason the Marlins may be interested is because assistant general manager Dan Jennings was a top scout in the Rays organization when the team drafted Upton in 2002. Thus, the Marlins brass would have someone who is very familiar with Upton and some of his development (Jennings left for the Marlins organization that year). But in terms of baseball and his skills, you can imagine the Marlins are seeing a few things that appeal to them about Upton:

- He is speedy and a perennial basestealing threat, having stolen 30 or more bags in each of his last five seasons. The Marlins already have a lot of speed, but they are an aggressive baserunning team.

- He has power, having hit 23 homers last year and this season so far. He has had three straight years with an ISO equal or better than .187.

Upton, as always, is a talented player with a ton of tools in his bag, but one who has never delivered on all of them as expected. Still, he is likely a valuable player heading into free agency, and it makes sense that the Marlins would be interested in him.

In yesterday's article about the Marlins and their decision with Emilio Bonifacio, Fish Stripes author Ehsan Kassim brought up an extremely valuable point about Upton's appeal.

make no sense at all for the Marlins. Yes, he is a young talented player, but his offensive game does not fit in at Marlins Park.

This is right on the money with regards to the Marlins' situation. Earlier in the year, we talked about how the Fish should build their team to fit their park, and a potential Upton signing goes against this principle. Yes, Upton is likely an above-average center fielder, and his speed game on the bases is not likely to decline with a move to Miami. But the biggest part of his appeal, and likely a large reason for the Marlins' interest, is that he can hit 20 or more home runs and the Marlins just do not have those players on their team. The Fish have to feel there is a power gap in their roster because aside from Giancarlo Stanton, only one player (the returning Logan Morrison) has hit more than 20 homers in a season before.

But Marlins Park right now is notorious for suppressing home runs in a major way. Sure, we cannot be certain yet whether that effect is real, as the park has only been around for less than one season, but given the spacious dimensions, it does seem like a legitimate effect. Earlier this month, Wendy Thrum of Baseball Nation pointed out that the Marlins have the second-largest differential in home runs hit at home versus on the road in the National Leauge, with only the San Francisco Giants hitting a greater number of bombs on the road compared to at home. Marlins Park also has the third-lowest total homers hit in any National League park, ahead of only AT&T Park in San Francisco and Petco Park in San Diego.

This does not necessarily mean that Upton cannot get the ball out of the park in Marlins Park. If you look at Upton's home runs in 2012 and 2011 on ESPN Home Run Tracker, most would have cleared the fences in Marlins Park as well. Here are his 2012 home runs with a delineation of Marlins Park's dimensions. 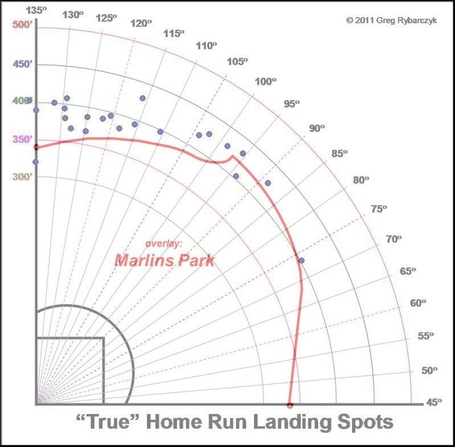 Only two borderline homers that would have left Tropicana Field or at least would have been close would be assured not to leave Marlins Park. In terms of average true distance and miles per hour off the bat, Upton appears to be exactly a league average home run hitter for the American League, so it is not as if he is hitting tons of wall scrapers.

But we have no idea just how much Marlins Park's dimensions will affect his other balls in play, the ones that did not necessarily leave the park. Maybe, in addition to losing a home run or two, he loses a few doubles to fly ball outs by having balls not hit off the wall or go deep enough to get by the outfielders. These cumulative losses turn into a decent impact on offense.

Questions on Other Skills

Now, the risk of home run power loss is is still uncertain, so it should not necessarily sink Upton. But it is large enough when you consider that the team would be paying free agent prices for his services. And it is especially important when you consider that the rest of his game has numerous holes. This season, Upton's walk rate is down to just 7.1 percent and his strikeout rate is up to 27.7 percent. His contact numbers have dropped to their lowest in his career and his swing rate has jumped to its highest mark. These are ominous signs of poor work at the plate.

Upton has maintained production because of his power surge, what happens if Marlins Park affects him just enough that, combined with simple regression, he loses too much power? Remember when I said that it was going to be difficult for GIancarlo Stanton to become an elite player with those type of strikeout and walk numbers? It's much harder to be a decent player when you do not have that kind of power and you are still that undisciplined at the plate.

I understand that the Marlins are concerned about a lack of power in their lineup. But as of right now, with no talk of moving the outfield fences in, the team is likely to get less benefit by trying to buy those home runs in the free agent market. Acquiring an elite power hitter like Josh Hamilton is one thing; there is no thought that he might lose significant power moving to a tougher park, much like there is little concern about Stanton losing power. But for Upton, an average-ish power hitter whose strength has only recently been on the rise, the concerns are evident. They are even louder when you consider that the rest of his game seems to be trending in the opposite direction.

The Marlins need to build with their home park in mind. Players like B.J. Upton may be not translate well to the deeper walls of Marlins Park. But a speedy outfielder who does not depend on home runs to provide value may lose nothing moving to this park and could give the best offensive bang for the Marlins' buck. As mentioned before, players like Michael Bourn and Shane Victorino have the proper plate skills and speed on the bases to provide value without having to hit homers in half of their games. They will lose little moving to Marlins Park but still benefit from the park's lowered run environment. Why risk Upton's power remaining strong in Marlins Park when the Fish can go to options with less dependence on power and perhaps other top qualities befitting of the park, such as better defense?

B.J. Upton is an option for the 2013 free agency for the Miami Marlins. But it is very clear that, unless the price is extremely low, he is not the best option for the team.