The Miami Marlins' Giancarlo Stanton has been an absolute monster while he has been on the field. His season line of .284/.351/.597 (.398 wOBA) is absurd for a player of his age. In fact, among the qualifying major leaguers this season, his wOBA ranks sixth behind five legitimate MVP candidates. That is right, only five players have been better hitters this season than Stanton. Stanton's 33 home runs are tied for second best in the National League, and he trails leader Ryan Braun by only five long balls. And while catching up to Braun may be a significant challenge, Stanton still has a decent shot at reaching 40 homers this year despite the injury.

There is also another leaderboard in which Stanton is climbing, and that is in the strikeouts department. Stanton has whiffed in 28.7 percent of his plate appearances this season, which ranks seventh among qualifying players. Of the six hitters in front of him, the best hitter is Adam Dunn with a .208/.340/.485 line (.353 wOBA). But only one of those same six hitters, Chris Davis of the Baltimore Orioles, is walking less than Stanton has this season, at least unintentionally. Each of the players have walked unintentionally at a greater pace than Stanton's 7.2 percent mark.

Those numbers are meant to highlight a concern that has crept up in recent months for Stanton, particularly in August. While Stanton was tossing out 10 home runs in the month, including eight in a mammoth west coast road trip, he was also racking up the strikeouts and not walking at all. As a result, his previously diminishing strikeout rate has gone back up on the rise, and the concerns about his ability to control himself at the plate have come up again. 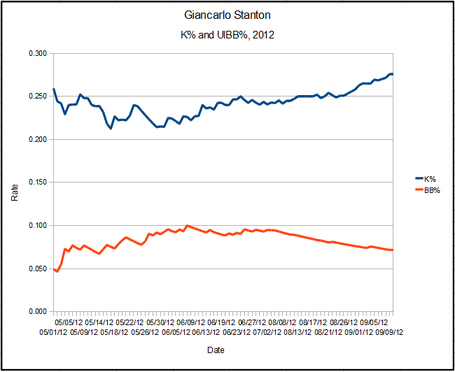 You can see that at some point during this season, right around early June, Stanton's unintentional walk rate had gone up to around nine to ten percent and his strikeouts had dipped to around 23 percent. For a player of his caliber, those numbers would have been an excellent progression of his capabilities given last season's improvement at the plate. As the season progressed, his walk rate did not really start falling until early August, while his strikeout rate jumped back up to around 25 percent and stayed around that level until late August.

What is the reason behind the massive change in strikeouts and walks? Well, it is clear it is from a more free-swinging approach in the past month-plus of time. From the article from just a few weeks ago.

It seems teams forgot just how powerful Stanton was all the way back in May or how successful they were avoiding the strike zone in June, as pitchers returned to throwing pitches in the zone against Stanton. On the pitches in the zone, Stanton has been demolishing pitchers, as evidenced by his 88 percent contact rate on those pitches and the 10 home runs he has launched since his return from the disabled list.

It is the pitches out of the zone that have chewed Stanton alive. In previous months, his approach was still close enough to his career marks that he still drew walks at around a 10 percent clip. But this month, Stanton has taken to swinging at too many pitches, particularly out of zone pitches; his in-zone swing rate actually remained even with his April and May rates. It is not a stretch to believe that the increased number of swings has also helped to decrease the contact out of the zone as well, turning more balls not just into fouls or weak balls in play but into swinging strikes.

In August, pitchers threw more strikes at Stanton, but they also got some success by throwing pitches out of the zone that he went after unnecessarily. It seems in September, pitchers have noticed this trend and have left Stanton chasing and in the dust; he has struck out in 47.7 percent (!) of his 44 PA this month while only walking once unintentionally, and a big reason why is pitchers once again adjusting by going out of the zone against him.

This trend is extremely alarming. Stanton is not letting pitchers give him the right type of pitches. Instead, he is continuing to fish and get fooled on pitches out of the zone, and like a rookie free-swinger, he is getting taken advantage of by opposing pitchers not offering anything good for him.

Who knows what the sudden reason for this change is. Maybe he is feeling pressure to perform more and do more for an offensively challenged team. Maybe he is fretting the same type of protection nonsense manager Ozzie Guillen has been concerned about. But the bottom line is that opposing pitchers now are not giving him many strikes at which to swing, and yet somehow Stanton is still swinging at them and not walking a lick despite more pitches out of the zone. This will be on him and hitting coach Eduardo Perez to address in the future, as the Marlins cannot have Stanton sunk by a scared approach by opposing pitchers.

If they will not throw Stanton strikes, he needs to take them. When they are finally forced to do so, then he can do his damage. This message must be sent to Stanton.