The Miami Marlins were on the cusp of a 3-1 victory before a single brought it to runners at the corners and one out and a 3-2 game. The team was then one called strike away from putting away the New York Mets for good, but the pitch was called as a just a ball.

One ball and then one batter later, the Mets had taken a 5-3 lead and the Marlins surrendered another loss to a team in the ninth inning. And while this has happened many times and none of the 2012 games mean much, it does not take the sting out of it as a fan.

Josh Johnson was not at his best despite the one run allowed in eight innings, but he was very good nonetheless. He only struck out four Mets while walking two, but there were very few if any hard hit balls by the Mets hitters and he was able to get timely grounders and double plays when needed. Johnson's lack of strikeouts was in part due to a lack of swings and misses, as he only induced four whiffs in 105 pitches.

However, two pitches did seem more effective tonight than in the past. His fastball velocity looked up early in the game, as Johnson was settling in at 94 mph for the first few innings. That average tailed off and stayed more around 93 mph into the later innings, but the overall average of 93.4 mph on his fastball was a very good sign given his noted decrease in velocity. His other impressive pitch was his curveball. Faced with a lefty-loaded lineup, Johnson turned to curveball more than the changeup tonight, and it seemed to be at its best. Johnson got 11 strikes out of 20 curveballs thrown, including a whiff and nine (!) called strikes. The ratio of balls to called strikes on the curve was at 8:9, an impressive 0.9 mark. Indeed, it seems he has more confidence in that pitch than ever before and was able to drop it consistently for strikes on the outer half, changing speeds on lefties all night.

Steve Cishek was charged to protect a two-run lead at 3-1, and right from the get-go things started to get difficult. Cishek gave up back-to-back ground balls with eyes for base hits, quickly putting two men with no one out. Ike Davis then followed with a bizarre three-pitch strikeout that started with a square up for a bunt that missed and ended with a pretty high fastball for a swing and a miss. However, the ensuing single by Lucas Duda put the lead in jeopardy, as the Marlins were only up 3-2 with the tying run on third with one out. At that point, the Marlins had dropped from a 93.5 percent chance to win the game at the start of the ninth to a 63.2 percent chance, a 30-plus percent chance drop.

Mike Baxter followed with a popup to shallow left field in foul territory, and it took a strong throw from Jose Reyes to hold the tagging Wright at third. With two outs, Cishek got a chance to go against Andres Torres. Here is the PA that transpired. courtesy of Brooks Baseball. 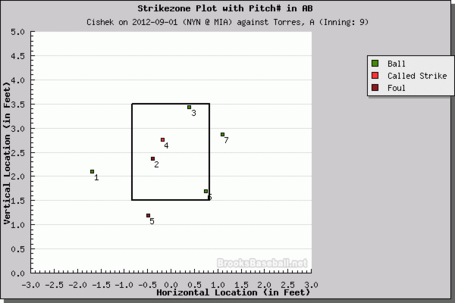 You will note that pitch number six, the called ball, was "on the black" via the general strike zone definition used on Brooks Baseball. It also appeared within the zone on FoxTrax, which uses Pitch F/X for its graphics. But the 2-2 pitch was called a ball, and pitch number seven lead to a walk to load the bases. Duda then delivered the single up the middle that drove in all three runners thanks to the botch by Justin Ruggiano in center field.

Can we blame the umpire for the supposed missed call? Take a look at all the pitches home plate umpire Jerry Meals called for lefty batters and note the dotted line that represents the typical lefty strike zone. 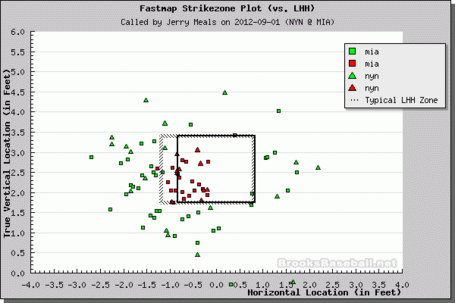 Even using the regular lefty strike zone that is typically enforced by most umps, that pitch is on the black. In fact, so was the called ball that was pitch number three in that PA. But instead of getting either pitch, Cishek was squeezed to a degree on borderline pitches and ended up having to face the batter that eventually brought the demise of this game for the Marlins. It happens all the time, and it is hardly the ump's fault. Had Cishek done a better job locating or had the defense been in slightly better position, the umpire's calls would not have mattered as much as they did.

During the eight inning, Jose Reyes stole his 400th base of his career. He did so on his 500th attempt of his career, garnering a perfect 80 percent success rate. Congratulations to Reyes on the milestone that eventually assisted in adding an insurance run on what could have been a sure-fire win.