The Miami Marlins were looking to bust out the brooms and escape with a sweep to pull within a game of third place in the NL East, but instead, the team ran into a buzzsaw otherwise known as R.A. Dickey. And while Josh Johnson's start opposite Dickey was fair and almost commendable, it simply was not enough. In the late innings, the bullpen let the game get out of hand, but this was a close affair for much of the afternoon.

While R.A. Dickey was spectacular in a complete game effort, Josh Johnson was not able to copy that sort of success against the Mets. His fastball in this game was the first immediate concern from Rich Waltz and Tommy Hutton, and it was a valid one. Johnson's fastball was only at 91.7 mph on average, one of the lowest marks of the season for him. The pitched topped out at 94.4 mph and touched 94 a few times, but it just did not have the juice it usually has. Still, Johnson was still somehow able to get five hitters to swing through the fastball, which is pretty impressive at the lower velocities.

But it was not just velocity that plagued Johnson, but rather control as well. 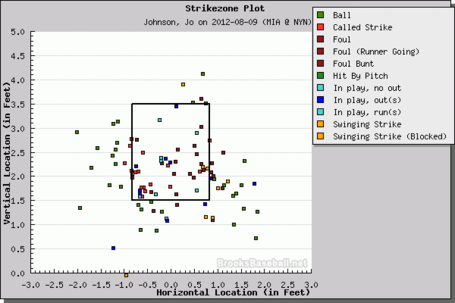 As you could see, Johnson missed the plate quite significantly, though contrary to Tommy Hutton's belief, not many of his misses were high. You can see that, even as he was wild horizontally with his pitches, he did not elevate a significant number of balls. Unfortunately, among the ones he did get up in the zone, they were punished. Having said all of that, he did fight back with a number of hitters and got a fair share of called strikes as well, as evidenced by his acceptable 1.7 balls to called strike ratio.

He made a few mistakes on his way to eight hits allowed, but only the Torres double stood out as an egregiously missed pitch. Even the home run he allowed to Torres was decently located and heading towards the catcher's intended spot; Torres simply turned on it quickly and delivered into the seats Jose Reyes style.

Jose Reyes was unable to extend his hit streak, thus ending his career-best streak. The streak ends at 26 games, and since he was unable to muster a way to get on base, his on-base streak also ends at 30 games. Reyes had PA in which he was aggressive with the swing, but Dickey was able to induce weak contact on most of his balls in play. Two of his grounders went right to the first baseman, and three of the plays required Dickey to cover first, which he was able to do barely in time.

Reyes did not hit any balls particularly well, so the streak ends quietly against the red-hot knuckleballer, unsurprisingly.

If there was one bright spot to be had, it was that the Marlins continued their pounding of Citi Field's Party City Deck by making it its Party City Home Run Deck. After Giancarlo Stanton (who took the day off today) launched two balls into that area, Justin Ruggiano continued his hot streak by launching his ninth homer into the same location. It was in impressive offensive feat in an otherwise empty, fluttering offensive day for the Fish.

It was not just the offense against Dickey that failed the Fish. The position players flubbed a number of defensive plays as well. Most notably, Reyes was unable to catch a David Wright popup into shallow left field that eventually came off of his arm and bounced off into the tarp for a double. Wright eventually came home to score on the Torres double that broke the early tie. Later in the game, Carlos Lee bobbled an easily playable ground ball in the eighth inning with Chad Gaudin pitching. That opened up a two-run inning after Torres tripled to right field and Josh Thole singled home his second runner of the game.

The defense happened to fail the Marlins today despite a solid showing by the middle infield outside of Reyes's lost popup. The team did convert three double plays, all involving Jose Reyes. At least in this regard, Reyes looked as smooth as ever converting the plays. Still, the Fish's defense cost the team a few runs in that regard as well.