The Miami Marlins have decided to throw Jacob Turner into the fire in the last month-plus of the season, and last night was his second start of the year for the Fish. While his first start was a far more unmitigated success, last night's game was deserved a little less praise. Still, given what we have discussed in the past about Turner's potential weaknesses and concerns, last night's start should once again be an encouraging sign overall for the 21 year-old right-hander.

Turner once again had his strikeout stuff present against the Washington Nationals. When he was perfect through the first three innings, it seemed he simply could not miss with his pitches. His location was top-notch, particularly with his fastball, which was once again moving swiftly into the hands of the right-handed batters. In his first trip through the order, Turner struck out four batters, and two of them went down looking on inside fastballs that darted into the zone and nicked the inside part of the plate for tough called strike three's.

Turner did not disappoint with his ability to fool hitters as well. He fooled hitters with the moving fastball, inducing four whiffs in 41 pitches with the offering. He also had success with the cutter tonight, getting three swings and misses on 20 offerings. The curveball also got a whiff, totaling eight swings and misses in 80 pitches, a strong 10 percent mark. Last time out, he got 12 swings and misses on 80 pitches, and while this time around he had a little less success, Turner still did a good job. This much was evident from his six strikeouts in five innings.

Turner has displayed a strong grip over his control, as evidenced by his second straight start with no walks allowed. Tonight's lack of walks, however, did not necessarily come with elite strike-pounding control. Against the lefties in the lineup, Turner put plenty of pitches in the zone, nailing 14 of 25 or 56 percent in the wide lefty strike zone. However, against righties, he put 29 out of 55 pitches in the zone as well, only a 53 percent mark. Both marks were above the league average overall, however, so concerns here are light at best. In terms of the pitches actually seen, Turner's work against both righties and lefties was once again stellar. Against lefties, Turner threw seven balls and five called strikes, and against righties, that mark was at 15 balls and 13 called strikes. The total balls to called strike ratio was at a tiny 1.2 versus the league average of around 2.0.

However, command has been an issue, and it was no more evident than in his pitch chart. 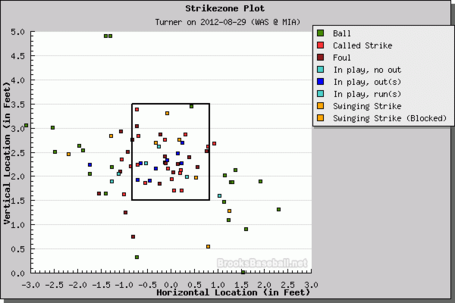 Unlike in his last start, Turner had a much harder time painting the corners despite his early-innings success. Yes, he nailed a few called strikes on the inner half against either side of the plate, but he also missed the plate plenty of times, as far as more than two feet from the plate. In his last start, he had the most difficulty with his pitches moving too far laterally, either to the outside or inside, and this was an issue once again in this start. He also buried a couple more pitches, and this time batters were able to lay off. You will note that, once again, Turner barely missed high in the zone, where he could have gotten hurt.

As for the command going the other way, you could see that some of Turner's locations were off on the night. Two pitches that came to mind as examples of his command leaving him were the home runs by Bryce Harper in the fourth and fifth inning. Harper's first homer came on an 83 mph changeup that sat in the lower outside corner of the plate but caught too much of the plate. The blue dot in this chart shows that. 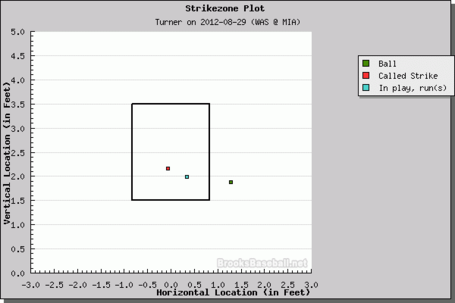 But where did catcher John Buck want that pitch relative to where it went? It is difficult to tell from the Nationals telecast and the highlight derived from it, but my estimate has the desired location closer to the inner half of the plate. 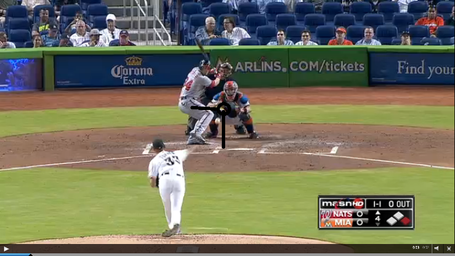 But unfortunately, it begins to dovetail outside and a little lower, and combined with the speed, it entered Harper's wheelhouse in a hurry. 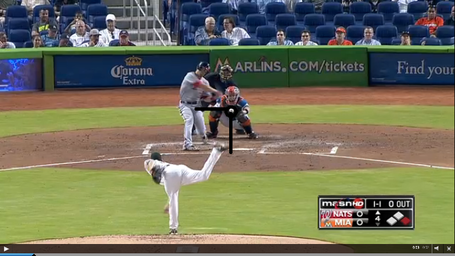 That is right before Harper makes contact, so that pitch dips and runs even further onto the outer half of the plate before it is sent high and out of there.

The second one was an even more blatant example. The setup for Buck is low and away, with a fastball or cutter called. 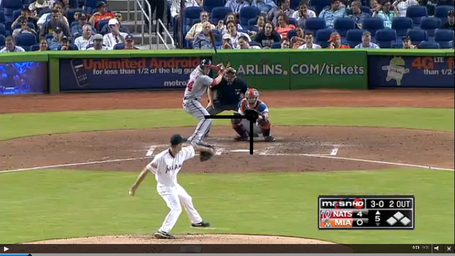 But the actual location of the pitch ends up thigh-high and right down the middle of the plate for Harper to turn on. 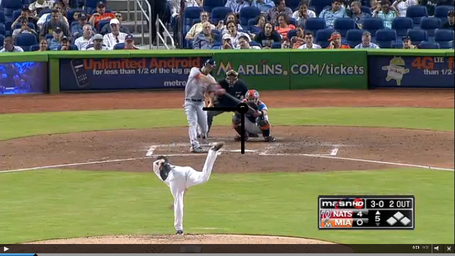 There were not many fat balls like those two to hit, but when Turner lost his command and could not properly locate his pitches as desired by both the catcher and him, he got hurt, and those two examples were the prominent ones. Those pitches ended up too meaty not to get demolished by a talented hitter like Harper.

Stuff Is There, Needs Refining

Once again, it is as you would expect from a young starter like Turner. With his velocity, he cannot afford to miss with pitch locations, particularly in the zone. With his solid control, however, it seems his gameplan should be to live in the zone as much as possible. So for Turner, the strikeout and whiff stuff is present, thanks to the movement on his fastball and the general effectiveness of his secondary pitches. But it will not show up unless the command is there to place the ball in the right locations. A couple of poorly placed pitches ruined an otherwise stellar six-strikeout night for Turner, and that is yet again the thing that he needs to work on most in the rest of the 2012 season.