The MIami Marlins struggled in last night's loss to the Atlanta Braves, and a good deal of those struggles fell squarely on the shoulders of rookie starter Nathan Eovaldi. Eovaldi, who had a great debut start in Miami against the San Diego Padres, was roughed up for six runs on eight hits with just one strikeout to his name. He also walked a batter and hit one as well, showing his struggles with control.

Meanwhile, in New Orleans, another acquisition, Jacob Turner, struggled in his second start in a row for Triple-A New Orleans in the Pacific Coast League. The top prospect was also unable to stop the bleeding, giving up four runs in six innings with four strikeouts and two walks.

The two Marlins that were acquired in major deadline deals by the Fish struggled in their second starts. Why did this happen? Let us examine their performances as much as we can.

In retrospect, it should not surprising that Eovadli struggled, though it should surprise us to see how badly he did struggle. The Atlanta Braves threw a host of lefty hitters at the 21-year old starter, and we knew that Eovaldi had difficulty versus left-handers due to his lack of an out pitch versus them. This was clearly evident in his lack of whiffs in 64 pitches in last night's game. He recorded five swings and misses last night, and all of them were versus right-handed hitters. Eovaldi failed to fool one lefty with a swing and a miss.

He also had a poor game in terms of control. 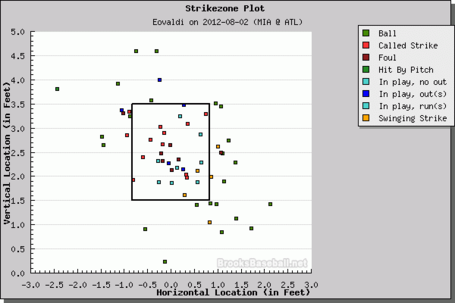 While the balls to called strike ratio was acceptable at 2.2 balls to called strikes, you can tell that Eovaldi did not work significantly in the zone, in part because of the presence of a loaded lefty lineup. When he did venture into the zone, as you can see, he was hammered, with all eight hits coming from pitches in the strike zone. Of those eight hits, you can see six or seven of them in poor location, meaning they weren't all just bad luck too.

Eovaldi is not likely to face such a lefty-heavy lineup with players of the caliber of the Braves' group every night. And he did induce some whiffs, though he failed on a number of two-strike counts to finish off a strikeout. Eovaldi threw 17 two-strike pitches and only once induced the final strike on a swing and miss; in comparison, he threw 11 balls and hit a batter with two strikes.

Eovaldi's two demons of control and a lack of an out pitch hurt him in this game, but once again, the caliber of lineup he will face will hardly ever be this strong and this lefty-leaning, so chalk this start up to a bad matchup gone terribly wrong.

Turner faced the Salt Lake City lineup that had three former major leaguers in Trevor Crowe, Hank Conger, and Ryan Langerhans in their lineup. Nevertheless, the excuse is not there to put up the performance he did. The good news was that he whiffed four batters in six innings, which is a littler better than his first performance (two strikeouts in eight innings). The problem was that he also walked two and gave up a home run. He could only muster 56 out of 98 pitchers for strikes or balls in play, compared to his opposing pitcher who threw 65 strikes or balls in play in 101 pitches.

Turner's issues in 2012 have been a combination of lack of strikeout stuff and lack of pinpoint control. Turner has always been a "little good at everything" type of player rather than an elite, dominant toolsy prospect. It is only two starts in New Orleans, but he has struggled in Triple-A all season long after a nice Double-A stint in 2011. The Marlins will likely take a closer look at Turner in the majors in September, and if they do not like what they see, expect him to return to repeat Triple-A at the start of 2013.

It is too early to panic due to either starter's early play with the Marlins, but the Fish should keep a close eye on both pitchers going forward in 2012.