Here at Fish Stripes, we warned everyone about tempering their expectations and knowing about the good and bad of Miami Marlins pitching prospect Jacob Turner. After all, he is only 21 years old and has been thrust into the majors primarily due to the Detroit Tigers' accelerated promotion plan, a plan that has hurt a few top prospect pitchers in its time (see Andrew Miller, Rick Porcello). So coming into yesterday's start against the Arizona Diamondbacks, it was easy to expect growing pains from the young Turner.

So when he put up the line that he did in the 3-2 loss to the Diamondbacks, Marlins fans had to be giddy with the results. Turner threw six innings, allowing three runs on four hits but striking out five batters with no walks to his name. Given his previous six starts in the majors, Wednesday's performance was a major improvement and a big step forward in Turner's development.

There were a few concerns gong into the start for Turner, but did the start allay those concerns? Let's take a look at them individually and see what we can determine.

We have discussed the strikeout concerns regarding Turner before, and much of it was based on the idea that Turner's fastball was losing velocity and that his secondary pitches, while good, were not clear out pitches. At the same time, given his rate of swings and misses, you would think those strikeouts should go up in number.

Well, in Wednesday's start, he showed that those swings and misses can be converted into strikeouts fairly easily. Against an Arizona lineup that was around league average with no missing starters in the first game, Turner struck out five batters and did so with plenty of swings and misses

Turner threw only 80 pitches in his start, and yet he dominated much of the Diamondbacks lineup with his stuff. He induced 12 swings and misses out of those 80 pitches, a 15 percent swinging strike rate. Obviously, this was a bit of a fluky finish, as he was whiffing batters at around an 8.5 percent rate all season in the majors and minors. Overall, including foul tips into the glove as whiffs, Diamondbacks hitters made contact in only 69.2 percent (!) of their swings against Turner. The fact that hitters were being fooled at a fairly high rate bodes well for his future strikeout rate.

The pitch that was most successful at inducing swings and misses, unsurprisingly, was his curveball, which was always known as his plus pitch. He got four whiffs out of 16 curves thrown, and hitters were unable to put any of the seven curves swung at into play. Four out of seven whiffs, with three foul balls on contact, is good results, and I believe it does show that Turner's curveball is advanced enough for the majors.

The most disappointing part of today's start was perhaps watching Turner's fastball. A big reason why his stock was falling and his strikeouts were a concern was the apparent drop in velocity of the pitch. Often times, you hear about high velocities in the minors, but Pitch F/X comes in and cleans out those numbers and reveals them to be lower than they are. But there have been rumblings about lost velocity for some time for Turner, who was once heralded as throwing between 89 and 95 mph. Yesterday's fastballs averaged 90.2 mph with a high of 92.1 mph. He sat easily between 89 and 91 mph for most the start.

The velocities were disappointing from a righty with Turner's elite pitching frame. From a guy at 6'5" and 210 pounds, you expect more downward plane and speed on the fastball, but Turner does appear to have lost most of what made his fastball potentially plus. At this velocity, it is hard to buy that pitch as anything better than average.

The reason why it may be an average pitch is because Turner can get some good movement out of the pitch. Yesterday, Turner's fastball displayed some surprisingly good horizontal and vertical break on the fastball. His average fastball had a vertical break of 6.4 inches, which is lower than the typical seven to ten inches of positive vertical deflection of an average four-seam fastball. And it seemed evident in the fastballs with which he finished off Diamondbacks hitters. Take a look at his six strikeouts and in particular the two fastballs which got strikeouts. The foul tip by Miguel Montero had a vertical break of 5.6 inches, while the whiff by Kuble had a break of 5.9 inches, both well below that average "flatter" fastball break. 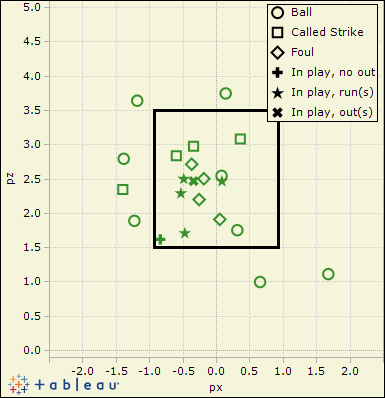 In comparison, he is yesterday's start, with the same scale shown here. 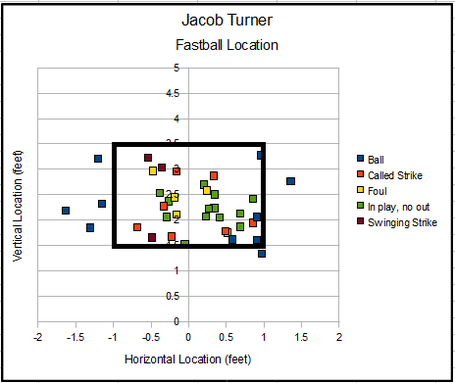 *The "In play, no out" catergory shows batted balls in play, out or no out

This chart shows improved control on Turner's 42 fastballs. A lot more of those pitches were in the zone, and there were a similar number of "dead center" pitches in his 42 deliveries yesterday as there were in his 22 fastballs against the Angels. The more encouraging thing about Turner's control yesterday was that he was better able to "nibble" on the corners of the zone. There were quite a few more pitches that were on the corners and at the edges of the zone that resulted in strikes or at least close ball calls. While Turner may have been squeezed a tad on a few balls, the fact that he was able to get near the edges for the most benefit was an encouraging sign compared to the past, when his pitches often sailed out of the zone in those situations. Turner threw only five pitches clearly out of the zone, and none of them missed high.

Control Was Solid Too

One thing that was never really bashed about Turner was his control, but yesterday's start had only flashes of good control. Out of 80 pitches, he threw 30 balls and 11 called strikes, a relatively poor 2.7 balls to called strike ratio. But his location was such that he pounded the zone fairly well, but still missed plenty, particularly with his breaking stuff. 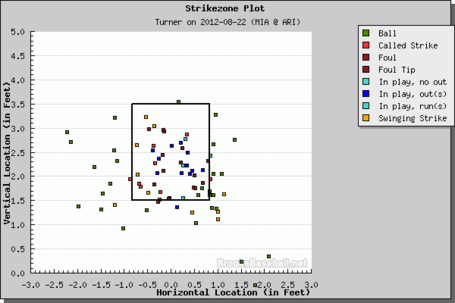 The good news is that Turner did not miss significantly in poor areas of the zone. He threw a few bad pitches outside to lefties, but his low pitches were efficient save for the two buried balls and he missed only one pitch high. His few pitches that were above the belt in the strike zone resulted in good swings and misses and otherwise acceptable results, and aside from those outside pitches, he was able to stay close to the strike zone fairly consistently. While this display was not one of legendary strike-pounding, it was a good sign from a player who was tossing a few too many walks for his caliber of stuff earlier in the majors.

It is too early to draw too many conclusions on Turner's performance, but the Marlins and their fans have to be encouraged. The control and command could use a little more fine-tuning, but his location overall was decent. The presence of whiffs and strikeouts and the lack of walks overall is a major improvement over the primary concerns of his 2012 season. And while the fastball was as unimpressive velcoity-wise as expected, the movement could prove to be useful in getting ground balls (56.3 percent ground ball rate in this game) and the occasional swing and miss, even with its mediocre velocity. Things are indeed looking up for Jacob Turner, at least after this first start.