The Miami Marlins have found a cure to their offensive ails, and it is no surprise that the cure is Coors Field and the Colorado Rockies, or at least their starting pitching staff. The higher run environment alongside the struggling starting staff has led to the Fish scoring six runs in two consecutive games. But the Rockies certainly did not fade, even in the face of yet another game with a Giancarlo Stanton home run. The Rockies certainly put up a fight, coming within one run and scoring five against the Fish once more, but the Marlins in the end prevailed.

Remember on Friday night, when Stanton decided he was not done hitting homers in Coors Field and hit the longest home run in the last three years? Well, he did it again tonight.

Yup, that home run came after Jose Reyes hit an RBI single that got the Marlins' scoring run started. Bryan Petersen and Gorkys Hernandez both singled to start the inning, and Reyes drove in Petersen with the single. Two batters later, Stanton hit a homer that was estimated at 447 feet and bounced out of the Coors Field concourse and into the parking lot.

That was Stanton's sixth homer in six games in Coors Field; he is the only player in that stadium's history to have done that. If he does it again tomorrow afternoon, he will become one of only three other players to have hit homers in his first seven games in a stadium, which is an impressive feat. Stanton is locked in.

And lest we forget, he's good with the glove too.

Surprisingly, so is much of the rest of the Marlins' offense. The Fish mustered 14 hits on the evening, including Stanton's bomb, which sadly was the only one hit tonight. Still, the Fish had multi-hit performances from the top five batters in their lineup, including unexpected nights from Bryan Petersen (three singles) and Gorkys Hernandez (a triple and a single). Hernandez even managed his first extra-base hit of the season, a triple into the gap past Eric Young Jr. in left field. You know your team is hitting well when Gorkys Hernandez hits a triple.

Jose Reyes tacked on two hits as well, including his ninth triple of the season. Reyes is one triple shy of double digits in that category for the seventh time in eight seasons. He is also one homer shy of 10 or more homers for the sixth time in eight years.

The unsung story of tonight's game was the improved outing by Nathan Eovaldi. His control issues still seem prominent, as evidenced by his four walks, but his performance against the Rockies tonight was his second best of his Marlins season. Eovaldi only struck out three hitters, but the whiffs were present. He got 11 swings and misses from the Rockies out of his 115 pitches, which was a better rate (9.6 percent swings and misses) than his season mark (7.4 percent). Eovaldi may not have gotten the strikeouts, but the stuff he had was electric enough to fool Rockies hitters.

The control, again, was the issue. 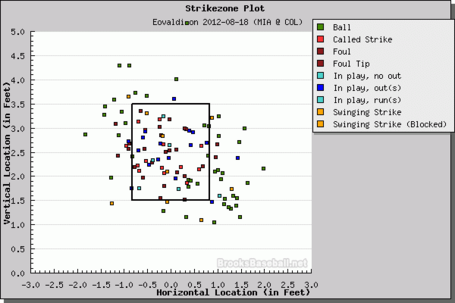 You can see that Eovaldi not only missed fairly often, but he missed everywhere against all hitters. Rather than burying pitches or battling inside on certain hitters, he was generally all over the place, speaking to his difficulty in placing pitches appropriately. While his stuff was evident, the command and control just was not there. Eovaldi threw 44 balls and just 15 called strikes, an almost three-to-one ratio which is completely unacceptable. The improvement is there, but once he gets a handle on his pitches, we will see a starting-caliber pitcher in Eovaldi.

One more encouraging Eovaldi note: he went 6 2/3 innings tonight, marking the first time he broke the six-inning barrier as a Marlin. It's a good sign.

It is hard to believe that the bullpen almost wrecked this game, as the Marlins were up 6-0 by the end of the second inning and the Rockies had only a 10.4 percent shot of winning at that point. Yet somehow the Marlins' bullpen almost blew this lead as well. In the eighth inning, Chad Gaudin gave up a series of singles alongside a walk and allowed a runner to score before being pulled without recording an out. In an odd 2012 twist, Heath Bell, Mayhem himself, had to come in and pitch a relative clean inning with runners on second and third. Bell struck out a batter but also allowed the sacrifice fly that made the game a 6-3 affair.

Steve Cishek entered the game to record the much-maligned three-run save, but he needed each of those runs for the save. Cishek looked a little wild in his placement and required a few good defensive plays to prevent him from allowing more than three hits and two runs, but good work from Gil Velazquez and Carlos Lee on line drives and tough grounders prevented another ninth inning disaster from the Fish.

The Marlins will go for the series win tomorrow with Josh Johnson on the mound to face Drew Pomeranz.