The Miami Marlins squeaked out another close victory on Friday night, pulling out a 3-2 win on the back of timely hitting and another good performance by Ricky Nolasco. However, the game was not without its hitches, as the Marlins were down very early in the game due in part to some ugly fielding, and Heath Bell once again made the ninth interesting on his way to picking up the eventual save.

Lately with Ricky Nolasco, we have been keeping an eye on his fastball velocity and his command in terms of how many balls versus called strikes he has been getting. When watching the game, you had a feeling as though he was off on his command despite having good stuff on the evening. Well, the stuff was indeed there, as his curveball was breaking hard into the zone all evening and his fastball was at 90.2 mph for the second start in a row. We all know the importance of having his fastball at an appropriate velocity after two season of decreased speed.

As for his command, it was there as well in classic Nolasco style. 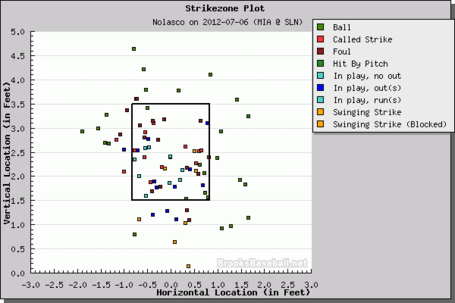 This is a classic Nolasco zone, as he was all over the strike zone yesterday night. Nolasco's balls to called strike ratio was at 1.8-to-one, which is exactly what you would expect from a typical zone pounder like Nolasco who relies on minimal mistakes. When he did miss, he often missed more down in the zone than high, which also leaves him less susceptible to hard-hit mistakes. This work inside the zone led to his only allowing one walk all evening and numerous off-balance PA.

Nolasco only recorded four strikeouts, and he did so on only seven whiffs on the evening. Nevertheless, the whiffs did look like they were of positive quality. Four swings and misses were low and out of the strike zone, meaning that he was able to get hitters to chase out of the zone. In fact, 12 out of the 42 swings against Nolasco's pitches were out of the zone, and that is a decent 29 percent chase rate. Even if they were making contact on Nolasco's pitches, at least a good many of them were in poor locations.

Bell's struggles last evening were less frightening than in weeks past. After all, of the two hits he did allow, one of them was an infield single, and while the other one was a double, it was a ground balls double that evaded Hanley Ramirez and one that could have at least had some fault placed on Ramirez. Still, it was yet again another discouraging outing because it was not a very clean one. Bell's control was present, as he hit a few 0-2 counts along the way as well and got almost as many called strikes as balls. Still, he failed to strike out a batter and failed to record a swing and miss as well, which has been a recurring theme for much of the season. He also lacked enough control to hit a batter during his outing.

It was not a clean outing, and there were bits of shakiness from Bell again. It was nothing like what we have seen just a month ago, but it still was discouraging. Yes, the worst may have passed for Bell, but his declining skillset still warrants a close eye.

It is always good to see Logan Morrison swinging a hot bat, and of late, he has been doing just that. Last night, he hit another no-doubter, this time to left field off of Maikel Cleto. That shot did not go far, but when it came off the bat, you knew it was heading into the left field stands. After a miserable start, his power stroke has picked up since June. Morrison has hit eight of his 11 homers since the start of June, and he is hitting an odd .272/.315/.592 slash line since then. Oddly, Morrison has only walked in just under four percent of his last 111 PA, which is strange due to his typically patient self. Still, 17 of his 28 hits went for extra bases, and he was still hitting only .253 on balls in play, so we can expect some regression both in power (on the way down) and walks and singles (on the way up) to keep his line decent going forward.