Share All sharing options for: This Day In Marlins History: Marlins, Rockies Play to Wild 18-17 Defeat

In Fish Stripes' continued attempt to remind people of the past of the Florida Marlins along with the present and future of the Miami Marlins, we bring you a new feature published three or so times a week entitled This Day In Marlins History! The concept itself is very simple: whenever we publish this, we find an interesting fact or tidbit related to the Florida / Miami Marlins and write a little bit about that event.

On this day, July 4, 2008, the Marlins and Colorado Rockies engaged in an epic, high-scoring battle on the run-savaged grass of Coors Field.

Yesterday's 13-12 loss to the Milwaukee Brewers was a rollercoaster of a game, with wild swings in win probability left and right. But this win probability graph above shows you just how wild and swingy the original high-scoring rollercoaster of Marlins history was. It may also cause a double take when you see that the final score in regulation was 18-17. Yes, the Marlins and their expansion brethren Rockies were in Coors Field, the happiest place on Earth for runs, but this was during the early days of the humidor and the slightly depressed run environment in Colorado. On that day in Marlins history, however, no effort could prevent the runs from scoring in bunches.

This game opened with all the makings of a Marlins victory. The team cruised to an early 5-0 lead before the Rockies ever swung the bat. Hanley Ramirez led the game off with a home run, Mike Jacobs followed quickly with a run-scoring double, and Matt Treanor capped it off with a three-run jack. Even that early in the game, the Marlins had taken more than an 84.3 percent chance of victory without a single Rockies PA.

The Rockies did climb back into the game early, having scored in the first three innings in the game and pulling within three runs at 7-4. Then the Marlins took the plate in the fourth inning and exploded. 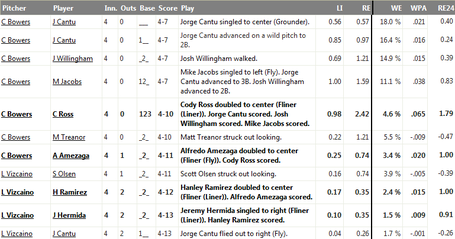 The Marlins busted open a close game with a bases loaded double followed by a series of base hits that put up six runs on the board. Cody Ross added eight percent to the team's win percentage with his bases loaded double, and the remaining "insurance" runs just added to the wave of what seemed to be a Marlins blowout. By the end of the fourth inning, the Fish were up 13-4 and had a 98.3 percent chance of winning the game.

The Rockies did climb back bit by bit, however. A couple of solo shots by Ryan Spillbourghs and Matt Holliday cut the lead to "just" seven runs, and Chris Iannetta knocked a three-run shot that pulled the Rockies to 13-9 against Marlins starter Scott Olsen. The following inning, Olsen was pulled, and the Rockies somehow did it again, with Spillboughs hitting another solo shot following by a two-run homer by Garrett Atkins. Somehow, the insurmountable blowout turned into a 13-12 game by the sixth inning. By the end of the inning, the Marlins had a 67.9 percent chance to win.

Then the seventh inning happened for both teams. 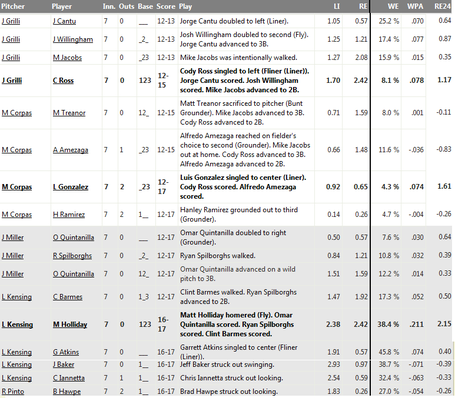 Of course, much like yesterday's game, this one ended at the hands of the Marlins' closer. The Marlins headed into the ninth with that very same 17-16 lead. What transpired next was five consecutive batters reaching base, leading in a Garrett Atkins single that tied the game and left two runners on, followed by an error by Hanley Ramirez that loaded the bases. With the bases juiced and no one out, the much-maligned (and deservedly so) Kevin Gregg allowed a single to Chris Iannetta to complete a stunning comeback in a wild game.

Gregg received the brunt of the blame for this loss, though some credit should also go to Ramirez for his miff at shortstop. Nevertheless, when a reliever throws a game away by blowing a whopping 77.5 percent of a team's chances of winning, you know that guy has something going wrong. Gregg failed to record an out in a spectacular meltdown that robbed the team of a win. While yesterday's game was indeed a crazy affair, this one will also be well remembered for being loaded with runs and swings of near-victory and competitiveness leading to an agonizing defeat.