The Miami Marlins finally picked up what appeared to be a solid, well-round victory tonight against the San Diego Padres. It was nice that it coincided with the debut of Nathan Eovaldi and a successful Double Ichthy Points game. Eovaldi did some good and some not-so-good, but his start overall had to be considered a success. Meanwhile, another home run for Jose Reyes along with a solo shot by Justin Ruggiano helped the Fish score just enough to get by.

Marlins fans had to be excited to see Nathan Eovaldi for the first time tonight, because we had all heard the scouting report. Eovaldi threw hard, had a decent-to-good slider with good downward as well as horizontal break, but he also had some control issues and was missing an effective third pitch to sneak past lefties as an out pitch. How did that scouting report compare to his start tonight? 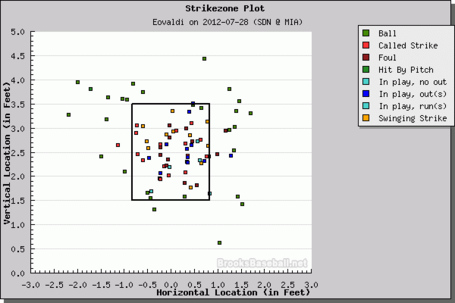 Just from that plot, you can tell that the control issues were present for Eovaldi tonight despite the two walks. The walk count was solid, but he did tend to fall behind a bit on hitters and did also nail a batter. However, despite the oddity of seeing all of those balls out of the zone, he actually did a decent job on pitches that hitters watched. Eovaldi threw only 27 balls versus 17 called strikes, which yields a decently impressive 1.6 balls to called strikes ratio. We generally say that you want to be under a two-to-one ratio, especially when you are like Eovaldi and suffer from a lack of swings and misses.

By the way, that was not an issue tonight as well, as the Padres were whiffing plenty through Eovaldi's pitches. The five strikeouts in 5 2/3 innings should have already clued you in, though to be fair, he did strike out the opposing pitcher Ross Ohlendorf twice. Nevertheless, Eovaldi's 11 whiffs in only 86 pitches is an impressive amount given the whole "no out-pitch" thing. That 12.8 percent rate of swinging strikes out of all of his pitches also looks good when looked at his swings only, as 11 whiffs in 39 swings taken yields a nice 28.2 percent whiff rate.

However, the "no out-pitch" thing did rear its head in the sense that, of those 11 whiffs, seven were on his 94.5 mph fastball, with hitters only whiffing on two of his sliders and two of his cutters. Interestingly enough, Pitch F/X classifications do not have anything about Eovaldi throwing a cutter this season, yet he clearly threw a 91 mph pitch with odd but still somewhat similar breaking as his fastball. It was not as neutral as cutters usually are (they look similar to sliders on the horizontal versus vertical movement graph), but his cutters had a lot of "rise" but tailed away more from righties. For what it is worth, the pitch has never really appeared in the Brooks Baseball pitcher card either, so whatever that was that Eovaldi was offering, it seems new and worth watching closely. For tonight, it wasn't a great pitch (worth about 0.6 runs in 11 attempts for the hitters), but it may be the key for him becoming successful if he harnesses it.

Reyes With Another Bomb

Jose Reyes has been catching fire lately, as he continued a 14-game hit streak with yet another home run, this time a two-run shot that gave the Marlins a 3-0 lead at the time. This drove home Eovaldi himself, who also happened to pick up a single to start the inning. Reyes's home run was the tipping point of the game, as it had the highest Win Probability Added (WPA) of the entire evening and gave the Marlins a strong lead that they never relinquished.

The home run itself was not as majestic or seemingly hard-hit as some of his other more recent blasts have been. This one looked like it was hit very hard off the bat, but it floated high instead of zipping into the stands like many of Reyes's line drive homers have been doing (remember the one he hit in Pittsburgh that nailed the concessions guy?). Still, it went into the right field corner, which happens to be the shortest part of the field. This one landed on or around the Miccosukee Gaming post behind the right field foul post, but once you saw the right fielder Will Venable running hard enough, you figured that one was getting out.

That was Reyes's fifth home run of the month, and the impressive (for him, at least) total had brought his monthly line to a very respectable .284/.337/.477 (.350 wOBA) line that is sure to go up after tonight. In fact, Reyes is having a very similar month to his June of this season, and it once again is a sign that the old Reyes is coming back in full form after that disastrous first month.

Justin Ruggiano tagged an additional solo shot that cleared the left field fence and landed in the Clevelander green seats for a Clevelander Pool Shot, and that home run sealed the deal for the Marlins (as well as ruining Ichthy player and regular whambam's Ichthyomancy pick).