The Miami Marlins suffered the clinching loss in a three-game sweep by the Pittsburgh Pirates, and the game was a microcosm of the team's season this year. The Marlins got a great performance by starting pitcher Anibal Sanchez that fell short by a few hits, including a soul-crushing two-run home run that sealed the victory for the Pirates. Meanwhile, Jeff Karstens did not pitch all that well and the Marlins hit a number of balls hard, but those balls in play landed right in the gloves of Pirates defenders.

One look at Sanchez's line for the afternoon and you could be convinced that he pitched well enough to win. The Detroit Tigers and Boston Red Sox were reportedly scouting Sanchez at today's start, and they received a top version of the righty pitcher. He struck out eight batters while walking none and giving up just seven hits. Surprisingly, Sanchez did not work all that strongly within the strike zone, at least in terms of balls versus called strikes. He threw 34 balls versus just 13 called strikes, which was worth only a 2.6 balls to called strike ratio. He also worked a little higher in the zone than the Marlins were probably comfortable seeing. 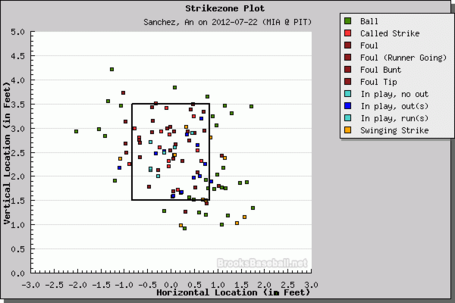 There were relatively few pitches lower in the zone and a lot of stuff located around the plate, and the Pirates at least attempted to swing at a good number of those pitches, taking 63 swings out of 113 pitches in the start.

The good news is that Sanchez also had his electric strikeout stuff. Sanchez induced 10 swinging strikes, good for a 16 percent whiff rate on swings and an 8.8 percent swinging strike rate on overall pitches. In addition, six of those ten swings and misses came at the most critical and beneficial time: with two strikes. Sanchez finished six of his eight batters via the swing and miss, showing would be scouts that he definitely has the strikeout stuff to be an elite pitcher.

Anibal Sanchez's only mistake, the pitch that led to the two-run home run by Pedro Alvarez, was only magnified due to the lack of the Marlins' offense. But this time around, the numbers do not indicate how poorly the Fish really did. Despite getting only five hits, the Marlins actually played decently, hitting a number of balls very well. Unfortunately, a good number of knocks landed right in the gloves of defenders this afternoon, and many of those gloves led to good defensive plays. The biggest play of the game was during a first and second situation with one out. Omar Infante took a pitch from Karstens and smoked it towards the defensively-beleaguered Pedro Alvarez, who snatched it off the ground and initiated the damaging 5-4-3 double play that turned out to be the Marlins' best chance of scoring left.

This was compounded by the fact that some of the same types of plays did not go the Marlins' way. Pirates shortstop Jordy Mercer lined a shot to third base that caught Greg Dobbs flat-footed and grasping to snag. Dobbs put a hand and his glove out and failed to slow the trajectory of the ball, as it flew past him and into left field for a double.

Even the breaks the Marlins did receive did not fully go their way. When Alex Presley seemingly caught a ball in left field with a dive, Logan Morrison, who was at second base, went back to second. When it was later deemed a trap and Dobbs was awarded a single, the umpires did not move Morrison forward to third base. There was no way to tell whether or not it would have mattered if Morrison had moved to third, but the point stands: even when the Fish did catch a break, it was not good enough to turn the tide in this game.