If I told you RIcky Nolasco would hold a no-hitter through five innings and asked you to predict the score of the game, you would be hard-pressed to consider a 4-0 Marlins loss the likely result. Of course, that is what happens when you face one of the best pitchers in baseball in Stephen Strasburg and you do not impress with equally strong stuff. Despite the good performance on preventing hits by Nolasco to start the game, the fifth and sixth inning unraveled and the Marlins bats were baffled by Strasburg on their way to a 4-0 loss.

Ricky Nolasco displayed decent control and was able to get whiffs from the opposing hitters. He put up a two-to-one balls to called strike ratio, showing that he had some semblance of control of the strike zone. This control was reflected in his decent strike zone location. 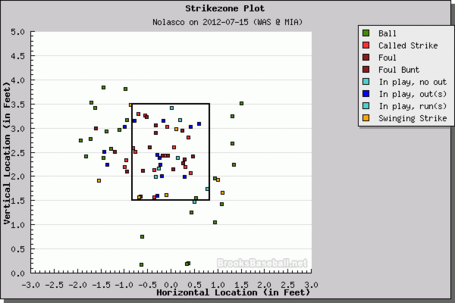 This location seems mostly similar to his previous start; in both cases, Nolasco stayed down and around the zone rather than miss high. His one unintentional walk in 84 pitches tell the tale of a pitcher with at least decent control of the zone.

The seven whiffs also indicated that Nolasco had his usual strikeout stuff. In his past few outings, he had been inducing similar whiff rates to the 8.3 percent mark he posted in this afternoon's game. With all of that good going on, it is confusing to see to see Nolasco only post two strikeouts in the game. In his last three starts, with similar whiff rates, he posted a 17.1 percent strikeout rate, but today's lack of whiffs caused an increased amount of in-play contact, and that in-play contact eventually hurt him.

You can never tell exactly what happens wrong in an inning, but in the two poor innings following Nolasco's shutdown first five, the results were the same (two runs scored) but the paths towards those runs were completely different. In the fifth inning, Nolasco was beaten by "small ball" play by the Nationals. He allowed a single for his first base hit. That hit was followed by two balls in play that showed the importance of getting strikeouts, as both grounders resulted in outs but advanced baserunners. Unfortunately, with two outs and the pitcher coming up following an intentional walk, Nolasco just could not sneak it past Strasburg. 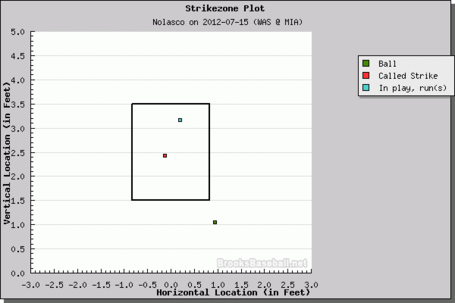 Sure, the location of that third and final pitch was poor. But you expect to be able to sneak past a high fastball against a pitcher, but that was not the case against Strasburg, who hit a grounder past Omar Infante into right field for a base knock. Following the Steven Lombardozzi single, Nolasco allowed two runs.

The sixth inning, however, was more unbalanced towards the Nationals, as Nolasco allowed three straight singles and a wild pitch before yielding two more runs and exiting the game in favor of Wade Leblanc. Nolasco's singles finished off an awful set of two innings that were not both bad but ended up in awful results for a Marlins lineup that was baffled by Strasburg all game.