The Miami Marlins complete their first sweep since May, ending the month of June and starting the month of July the same way the began June: with a series win against the Philadelphia Phillies. The Marlins put up five runs off of two homers and one hard-hitting inning against Phillies starter Joe Blanton, and that was enough for Ricky Nolasco's second straight good performance.

For the second night in a row, Giancarlo Stanton was able to go deep against the Phillies and assist the run-scoring cause. Stanton's home run this time peppered yet another location in the ongoing Stanton Home Run Ballpark Tour. He has hit a few shots out to deep right-center field, showing off his prodigious power. But this time, he displayed it in yet another fashion: going directly to the opposite field: 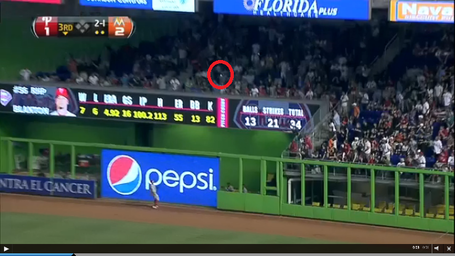 Stanton has driven one directly down the right field line before, placing it right on the railings in the area for a homer. This one was more impressive, as it lofted and just kept climbing until it was obvious it was getting out into the visitor's bullpen. What was perhaps most intriguing about that is that Rich Waltz and Tommy Hutton did not even think it was all that well-hit, and off the bat it did not sound like a particularly well-struck ball. Yet with Stanton's power, even those types of swings produce long balls.

It was good to see Hanley Ramirez also get in on the act with a home run of his own. His shot was hit specifically to get the folks at the Clevelander up and awake. 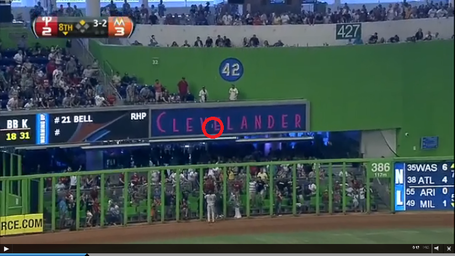 It was not quite a Clevelander Pool Shot, but it did land in those comfortable-looking green seats just by the wall. The Clevelander wall is just tall enough and Ramirez hit that ball just high enough that a scale would have done nothing, because while it was well-hit, it did not go very far. That ball's trajectory was more upward, indicative of that uppercut swing that Ramirez had on the pitch by Antonio Bastardo.

What was nice about that PA was that Ramirez fought back from an 0-2 count against Bastardo. 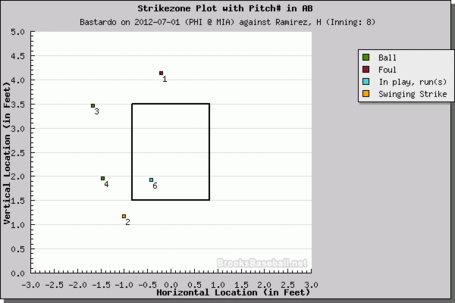 Ramirez took two swings at awful pitches, then was able to hold off on three straight pitches outside, with one not registering within this range. He then took Bastardo's slider, the only pitch that hung into the zone, up and away into the Clevelander.

This start was the second straight good start for Nolasco, and boy did it come at an opportune time. Nolasco has looked awful for most of the season, losing his strikeouts and walking more batters, with the only explanation being the dip underneath 90 mph on his fastball. For those that have noticed this, you should be happy to see this table from Brooks Baseball.

His fastball was up to 90 mph, though he did not necessarily get much in the way of called strikes on them. He threw 14 balls versus just three called strikes, but he did also get a swinging strike. Overall, Nolasco's control in terms of called strikes and balls was relatively weak, as his ratio was 2.3-to-one on balls to called strikes.

No, in this game, his slider and curveball did most of the work. Nolasco threw 24 sliders and induced eight of his 11 swings and misses off of them. Meanwhile, he used his curveball to pepper the strike zone, throwing just as many called strikes as balls with the pitch. Those two pitches did a good amount of work for Sanchez, and they must have in part been helped by a slightly better velocity.

Rich Waltz mentioned that Nolasco's drop in velocity could be due to something akin to what caused Javier Vazquez's drop in velocity last season. I will not jump to conclusions on that front, but if pitching coach Randy St. Claire does indeed see that and can fix that two-year decline in velocity, the Fish would owe him in a big way for re-tuning an already possibly mediocre pitcher into a useful one again.