The Marlins And Their Hair-Grooming Ways

Share All sharing options for: The Marlins And Their Hair-Grooming Ways

The Miami Marlins have never had much of an affinity to wild hair. In the same way that the New York Yankees never allowed flowing hair on their team during the season, the Marlins also require a clean look in terms of hair for their players. In fact, free agent signing Jose Reyes had to cut his hair when he joined the team.

Poor Jose did not look happy to lose those long dreads, but his clean look actually looks pretty good after a while. It was strange to see the first time around, however.

Why do I bring this up? Well, hair has not been an issue lately with the Marlins, but it did come up fairly recently with me when I saw this picture.

That is recent Triple-A call up Kevin Mattison, on what lies on his face could very well be the most ridiculous mustache the Marlins have ever boasted in team history. I mean, just looking at that thing makes me want to cut it off, it looks so hideous.

But then this got me thinking about the past history of the Marlins and hair. It may be worth taking a trip down memory lane and seeing what we can scrounge up from the distant past, in a time before hair policies were so strict with the Fish.

One of the original non-groomers on the Marlins was perhaps the team's first closer, Bryan Harvey. 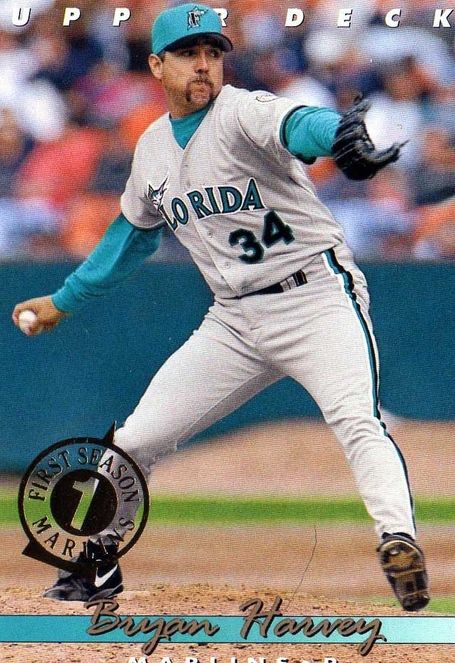 Now, Harvey did not have that bad a 'stache, but when you compare it to the days of now, it is an unbelievable piece of facial hair.

Of course, our next closer happened to boast quite the goatee. Robb Nen was many things, and shy about his facial hair was not one of them.

He still boasted a beastly goatee even as the Marlins transitioned from their teal unis of the mid-90's into their more traditional grey/teal/black combination of the latter part of that decade. The Fish let him have it, and we are all the better for it.

Of course, not all Marlins in the latter part of the decade stuck around, and we know that the team traded a good number of players. It is a shame that this guy did not stick around longer, and it's not only because of his facial hair. 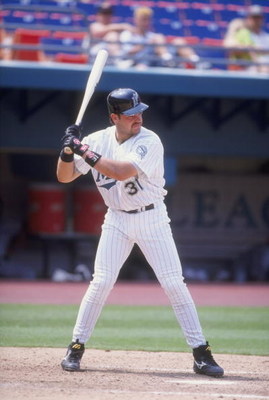 This is, of course, one of two known photos of Mike Piazza as a Florida Marlin. Seriously, he was here for like ten days. I swear he played for us, and this is proof! Shame him and his mustache could not hang out any longer, because he obviously ended up having a Hall of Fame career with the rival New York Mets.

As we moved into the 2000's, I could not pass up noting one player who played a pivotal role with the Marlins in their 2003 World Series victory. We all remember the good work Carl Pavano put in for this team. 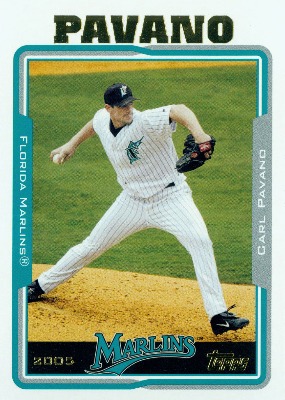 That mustache is rather subdued, all things considered. The reason why I bring up Pavano is not his past with the Fish, but his now with the Minnesota Twins. Carl Pavano's current Twins 'stache is Mattison-like in its awfulness.

In fact, it is quite similar to Mattison's in that they are both right across their respective faces, just hanging out underneath their noses, not a care in the world, while their respective players are saddled by the appearance.

When we move into the 2006 era, we begin looking at Marlins cuts and facial hair that are more trimmed down due to the team's stricter policies. Still, some players decided to take matters into their own hands anyway and found ways to express themselves, often in terrible manners. Ricky Nolasco, for example, felt the need to express his sharp personality with this awful haircut. 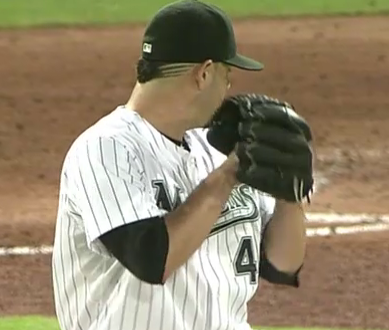 That was not a good idea then, and thankfully, Nolasco dropped that idea soon after. As David Hill of Marlins Diehards points out, no haircut of Charlie Sheen's is a good call.

As mentioned, at least Nolasco dropped that look. Unfortunately, Hanley Ramirez adopted an odd one before this season (picture not showed due to copyright purposes). Never mind the fact that Johnson appears to have been hiding out in a cave for the longest of times before coming out to celebrate the stadium open. Ramirez was still sporting his ridiculous mutton chops in this image, and believe me, they looked worse when you faced him directly. He may have even cleaned them up to a degree for that photo opp, but they were still terrible in that picture.

So as you can see, the Marlins have a rich history of hair anomalies, even if they do not get much of a chance to show it under the more draconian policies of Jeffrey Loria. So the next time you lament seeing Reyes without his flowing locks, just imagine Kevin Mattison's mustache and thank your lucky stars we do not have looser hair policies.