The Miami Marlins have not enjoyed much in the month of June, but the company of the Philadelphia Phillies has at least been kind to the Fish. The Marlins pulled off their third straight win with a 3-2 victory on the backs of a couple of big-time Giancarlo Stanton hits and the excellent pitching of Mark Buehrle.

Giancarlo Lights That Thing Up Again

Giancarlo Stanton seems to be fond of taking home run tours of the park, as he found another location in the stadium to pepper with a round-tripper. This time, Stanton decided to pay homage to the great Jackie Robinson by smacking a solo homer with a line drive right to the legendary Robinson's retired number in left field. 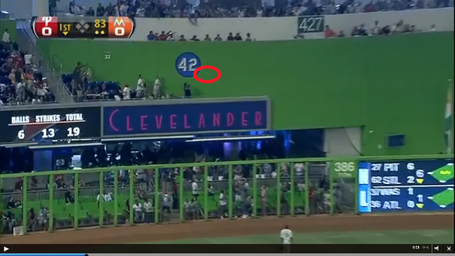 Stanton nailed that homer in the first inning following a Hanley Ramirez single that Ramirez attempted to stretch into a double. While this would have been even sweeter as a two-run homer, the Fish still took the early lead with the shot, which was hit on a rope yet looked as though it was hit out of position by Stanton. He was reaching out over the plate and did not look like he hit that as well as he could, yet it was still a rocket that had no doubt the second you heard it.

Stanton added a well-hit single to drive home Jose Reyes in the third inning that added to an eventual 0.247 WPA in the game. Stanton's hits today were high-impact in terms of the game and in terms of how well they were hit. He continues his tear at home, as Stanton was hitting .309/.382/.599 before today's performance. He now has hit 11 of his 18 home runs at home, which is excellent for the viewers of Marlins games live at the park. Now, if Stanton could be so kind to splash one into the Clevelander, those guys can also get in on the Stanton Home Run Tour.

Mark Buehrle struck out a season-high seven batters in his last outing against the Toronto Blue Jays, and today he ended his relatively poor June with a second straight solid start in a winning effort. This one was very similar to his previous one, as Buehrle also went seven innings today and struck out seven once again. 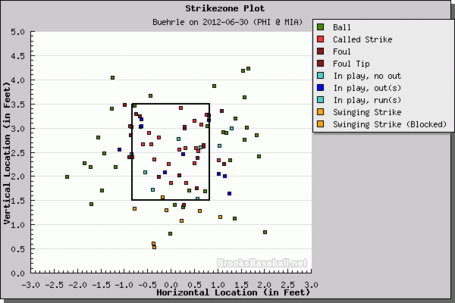 Part of the reason for Buehrle's strong performance was that he was once again in and around the zone as usual. Aside from a spat of difficulty in the second inning, Buehrle mostly cruised on the way to 35 balls and 23 called strikes, yielding an impressive 1.5-to-one balls to called strike ratio. That sort of pounding the zone is something that is pretty consistent in most Mark Buehrle starts, and today's was not different. It helps that he started batters off in positive positions as well; of the 25 batters that saw at least one pitch, Buehrle put 14 of them into 0-1 counts with first-pitch strikes.

What was different is that he was able to leverage those called strikes and those favorable counts into strikeouts. Buehrle got eight whiffs on 99 pitches, yielding an 8.1 percent swinging strike percentage. Not counting today's game, Buehrle's 7.1 percent rate was the highest of his career since 2007, and now he has had two straight successful starts with plenty of whiffs. If Buehrle's strikeout prowess continues at this pace, he may break 110 strikeouts for the first time since that season, in which he struck out 140 batters in 218 innings.

Reyes Active on the Bases

Jose Reyes had another strong game in a strong June, collecting two hits, one of which was a double. Reyes was also pretty effective once he got on the bases. He scored on an up-the-middle single from Stanton and helped to facilitate another run with two consecutive steals. After a Ramirez line drive out, Reyes stole second base with ease, Following an intentional walk to the red-hot Stanton, Reyes initiated a double-steal which took the double play out of the picture. This was followed by an eventual long sacrifice fly by Justin Ruggiano to score Reyes.

The steals were Reyes's first steals since early June; he only had one steal all month despite being on base fairly frequently. Reyes has 18 steals on the season now and is hitting a far more respectable .271/.346/.386. This still is not where the Marlins want it to be, but he is continuing to regress appropriately and the Marlins should be very happy with his progress.